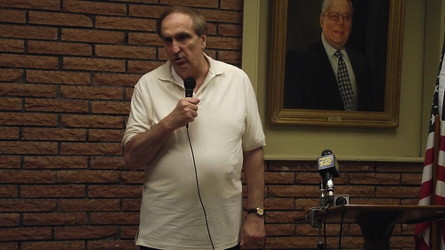 NEW YORK — Longtime Brooklyn Democratic party boss Vito Lopez has been stripped of his committee chairmanship and his seniority after an ethics panel determined that he had sexually harassed two women this past summer.

An Assembly ethics committee found allegations by the women "credible," including that he made "repeated comments about physical appearance, their bodies, their attire and their private relationships," according to a letter addressed to Lopez and released by Assembly Speaker Sheldon Silver earlier today. The committee also found that allegations of "unwelcome" physical conduct were believable, including that he put his hand between one woman's legs during a trip to Atlantic City.

Silver announced that Lopez would be removed as chairman of the Assembly Committee on Housing, banned from any other committee chairmanship or leadership position and that his staff allocation would be reduced through attrition to the amount of a first-time member. Lopez is also mandated to undergo sexual harassment training. His office will be prohibited from employing staff under 21 years old or interns.

“The Assembly has a zero tolerance policy when it comes to sexual harassment and we are committed to ensuring a safe and respectful workplace for all our employees,” Silver said in a statement.

Lopez didn't respond to a request for comment left at his office.

The letter from Silver to Lopez contains graphic detail of the allegations against Lopez.

According to Silver's letter, the Assembly committee unanimously found that the allegations were "credible," including that Lopez forced one staffer to accompany him on a trip to Atlantic City in July, where he "attempted to kiss her, that she struggled to fend you off before you stopped, and that on the drive back from Atlantic City you again put your hand between her legs."

Fellow elected officials and good government groups have called on Lopez to resign from the Assembly and as the county chair of the Brooklyn Democratic Party, including Council Speaker Christine Quinn.

"There must be zero tolerance of sexual harassment in all workplaces, always," Quinn said in a statement.

First elected to the Assembly in 1984, Lopez founded the Ridgewood Bushwick Senior Citizens Council, a community service agency in Brooklyn. From his base in the scrappy Bushwick neighborhood, he has become a kingmaker in the borough, helping to choose which candidates get the favor of the party and which don't. Fellow politicians often seek out his favor.

That has led some reform-minded groups to form a coalition of in recent months to oppose Lopez's power in the borough.

Meanwhile, Lopez has dodged other scandals, including two federal investigations into his community service agency and a Department of Investigation probe.

Vito Lopez Letter 8-24-12
Removing Lopez as Chairman of the Assembly Committee on Housing and banning him from any other committee chairmanship or leadership position;
Reducing Lopez’s staff allocation through attrition to the amount reserved for a first term member and forfeiting his seniority in the Assembly;
Requiring the Assemblyman to undergo supplemental sexual harassment training; and
Prohibiting Lopez from employing staff under 21 years old or interns in his Assembly offices.