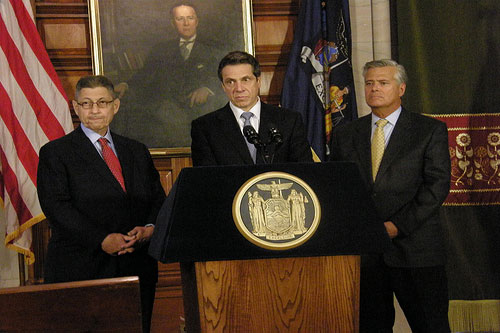 On a sunny Friday at 4:35 p.m., after months of secret negotiations between Gov. Andrew Cuomo, Senate Majority Leader Dean Skelos and Assembly Speaker Sheldon Silver, it was a simple press release that announced a deal to drastically reform Albany's ethics laws. The word had leaked earlier in the week that an agreement was impending, but the low-key announcement on Friday, indicated that legislative leaders may have wanted to move on the deal quickly, before their conferences would have time to balk at the reforms in the package.

Although the measure still needs formal approval from the legislature, the agreement seemed to end years of bickering in Albany. The deal, hailed by good government groups, represents a victory for Cuomo, who had made ethics one of his top three priorities.

Amid all the celebration, however, the measure may be as notable for what it does not accomplish as for what it does. In particular the package mostly avoids campaign finance reform even though many observers believe that the torrent of unregulated donations is at least partly responsible for New York's reputation for dysfunctional government. And the new ethics body created to investigate the legislative and executive branches would not have the power to recommend or dole out punishment. And there is concern that because of the requirements to start an investigation three members of the board from one party could easily block an investigation of someone in their party.

Under the package agreed to last week, legislators, including lawyers, would be required to reveal all of their clients including those that do business with the state. The financial statements of members of the State Senate and Assembly, which now hide income amounts, would be available to the public without any redaction. Legislators convicted of felonies involving abuse of their offices could have their pensions reduced or taken away altogether. However, the new disclosure laws wouldn't go into affect until the new legislature is seated in 2013.

The most significant overhaul will see the creation of the Joint Commission on Public Ethics, a 14-member group that will be able to investigate corruption in both the legislative and executive branches. It will be made up of eight people named by the legislature -- four by Democrats and four by Republicans -- and another six named by the governor and lieutenant governor. One major sticking point in negotiations was whether the governor or legislators would have more members on the commission. Legislators won out.

The joint commission will not have authority to dole put punishment. Instead, the group will have to forward its findings to the Legislative Ethics Commission, which will have the ability to impose penalties legslators. The Legislative Ethics Commission has been known for its inaction. It only recently took its first ever action against a legislator, Assemblymember William Boyland, who is also facing a federal criminal indictment.

The agreement also will create a new database that will list individuals and groups that "appear" in a representative fashion in front of the state legislature -- in other words, lobbyists and anyone pushing for the introduction of legislation.

"I have repeatedly said that in order to get this state back on the right track, we must end the dysfunction and corruption that has plagued Albany for far too long and bring integrity back to the halls of our Capitol," said Cuomo in a statement Friday. "This bill is the tough and aggressive approach we need. ... Government does not work without the trust of the people -- and this ethics overhaul is an important step in restoring that trust."

Dick Dadey, executive director of Citizens Union, sister organization of the Gotham Gazette, said the deal "is an important and much needed achievement." Dadey cited the client disclosure rules and a the "reconfiguration of the state ethics panel resulting in no one elected official controlling a majority of the appointments."

Cuomo's repeated threat to set up a "Moreland Commission" that would have broad authority to investigate corruption in the legislature became a familiar refrain as session wore on. Even last week, as reports surfaced that a deal was at hand, Cuomo continued to insist he would use the Moreland Act if a bill was not passed by the end of session. However, there is also a lot of unsubstantiated talk about whether Cuomo made concessions on some of his other legislative priorities to get both the Assembly and Senate majorities on board.

Despite all Cuomo's tough talk, reform advocates admit a lot of reforms were left out of the package.

Earlier this year the New York Public Interest Research Group issued an analysis showing that New York's campaign finance limits are increasing to adjust for inflation and will make New York the first state with campaign contribution limits exceeding $100,000, though five states do not have limits at all. Good government groups point out that legislators and the governor benefit from these high donation limits.

When candidates do violate campaign finance laws, little if anything is done to punish them. Cuomo wrote in one of his many policy books that the "limited" powers of the state Board of Elections must be expanded. Legislators including former Sen. Pedro Espada get away with skirting reporting requirements year after year but suffer no consequence. When Espada finally did get indicted it was for allegedly stealing money from his health clinic, not campaign finance violations.

The state's hiring freeze has left the board with only two employees to examine the filings of over 3,000 active candidates. On top of staffing problems, the Board of Elections has two Democratic and two Republican commissioners. A majority of commissioners must vote to initiate an investigation, and most of the time the vote is deadlocked. That would have changed under an ethics bill passed by the legislature in 2010, but it was vetoed by then Gov. David Paterson.

The legislature is only in session on Monday and Tuesday this week, so the bill may not have time to age properly before the legislature leaves town this week. The Senate and Assembly will then return the following week for five days before the final day of session on June 20.

There will be a sense of urgency behind getting the legislation passed, as the announced deal on a property tax cap, another of Cuomo's top three goals, seems to have fallen apart or at least have been delayed. Cuomo will want to avoid letting the ethics deal crumble or stall in the same fashion.

That said, legislators have reportedly expressed concern over the ethics package. Some have even expressed doubts that they will run again next year because of the tougher disclosure requirements.

In addition, the legislature does not have many achievements to point to this year. And with only eight legislative days remaining, they have not voted on ethics reform, independent redistricting, the renewal of rent regulations, same-sex marriage or the property tax cap.