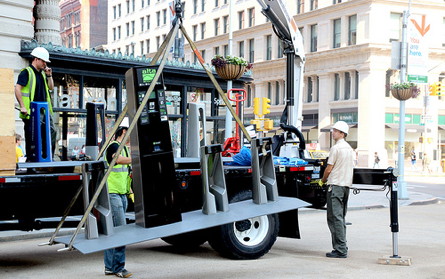 Workers install a dock to model how the city's bike share program would work, 2011.

NEW YORK â€“ In the near future, subway riders may be able to use their fare cards to check out a bike from hundreds of nearby docking stations.

The Metropolitan Transportation Authority said it is open to evaluating ways to integrate fare payment with the city's bike share program as it moves toward a wireless, smart card-based system by 2015, agency spokesman Aaron Donovan said in a recent interview.

The smart card will be based on an open payment system that will allow customers to simply tap and go at a turnstile with their own credit or debit cards.

The city's bike share program -- which promises to put 10,000 bikes that can be checked out on the streets in Manhattan, Brooklyn and Queens -- is expected to begin rolling out this summer. Officials have said the program will likely begin in early August.

Department of Transportation spokesman Nicholas Mosquera said that in other cities, up to 50 percent of bike share trips are connections to other modes of transit.

But he said while he expects to see the same here, the DOT is currently not working on fare payment integration at this time. "We look forward to exploring it in the future," Mosquera said.

The Paris Region Transit Authority currently issues a tap-and-go fare card called Navigo that makes it possible to pay for the city's VĂ©lib’ bike share system as well as other means of transportation.

"Users can then just show up at any station and take out a bike from a docking station without having to go through any other process: you simply select a bike, swipe your card over the card reader and wait for the green light and signal to release your bike," said Albert AssĂ©ra-Directeur, strategy and marketing director for JC Decaux in Paris.

The Smart Card Alliance, a non-profit association that works to stimulate the widespread application of smart card technology, said it backs a similar plan for New York City.

Executive Director Randy Vanderhoof said he could foresee a Paris-like situation where the Alta-run bike share accounts could be linked to a card issued by the MTA.

That way, people who use both services would have a common way to check in and check out of both systems, he said.

The widespread use of such technology will also be spurred, in part, by a new initiative backed by the major credit card issuers requiring all U.S. banks to switch over to smart cards by 2015. "Soon, everyone will have a card that they can use in open payments systems like the MTA and the bike share program," Vanderhoof said.

He said the bike share stations extend the reach of the transit system, making distant parts of neighborhoods easily accessible from subway stations.

"The system will be perfectly suited to any potential fare integration," Mosquera said.