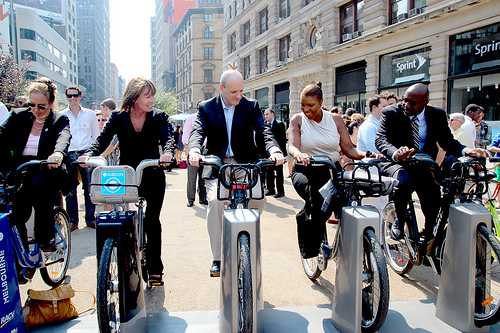 NEW YORK — The latest delay of the city's bike share program is being blamed on damage caused to equipment by the floodwaters of Superstorm Sandy.

The bike share will now launch in May 2013, with 5,500 bikes instead of 10,000 as initially planned, the city's Department of Transportation said in a news release Friday. The bikes will now roll out first "in the densest and most geographically contiguous parts of the service area" of Manhattan and Brooklyn.

Citi Bike Share, as it is known, failed to launch this past summer as expected because of software glitches.

And while the program appears to be lurching forward, there are signs that the Candian-based sole supplier of bikes and technology for the bike share, known as Bixi, is in financial trouble and is straining to meet its obligations in other U.S. cities.

Recently put up for sale, the company and its U.S. partner, Alta Bicycle Share, have been incapable of delivering 54 new bike stations for the expansion of the Washington, D.C., program, according to The Washington Post. There are also delays with the launch of Bixi-based systems in Chicago and San Francisco, though not necessarily because of difficulty obtaining equipment.

The delays — coupled with the culture of secrecy by company and city officials regarding details about the program's launch — have added to the frustrations of cyclists as well as critics who say that despite the Canadian supplier's financial woes, Alta appeared to be a shoo-in for the New York City program.

Meanwhile, critics of how the city has handled the bike share program are questioning whether Alta has adequate insurance to cover the damage to the equipment caused by Sandy.

"I'd say expect more delay and more shrinkage of scope," said Norman Steisel, a former deputy mayor under David Dinkins who has sued the city over a bike lane in Brooklyn but supports the idea of bike shares. "Given its problem-plagued history to date in New York City and elsewhere, Alta has proved itself to be unqualified to carry out the program." He said that "sufficient grounds exist to declare the firm in default."

"This important and highly desirable restructuring of our street network should be started  over — this time with proper legally required input of the City Council by exercise of its franchise granting authority," said the government policy expert in an email to Gotham Gazette.

(Steisel has earned the ire of many in  today's cycling advocacy community, because of his vocal opposition to an additional bike lane in Brooklyn's Prospect Park â€“ but he told Gotham Gazette that he thinks bike shares and lanes are "all fabulous ideas," but doesn't agree how they've been implemented.)

Alta is listed in the official contract as the sole owner of the New York City Bike share or NYCBS. According to the city's contract, if the city has reason to believe the bike share contractor is in poor fiscal health, and that that the financial woes might impact its ability to perform its duties, DOT can request a full accounting of its finances.

For the record, Alta has fiercly maintained an official separate identity as a company apart from Bixi or the publicly-funded PBSC.

But since PBSC/Bixi is the exclusive supplier of bikes and technology for Alta, it stands to reason that if there is no PBSC/Bixi, then Alta will certainly be facing an existential crisis.

As recently as this past fall, Bixi announced that it did not bring in the revenue it had projected for this past year. Its deficit was due to delays in getting the bike-share programs up and running in cities like New York, according to the Montreal auditor general's office.

New York City's Department of Transportation did not respond to questions about whether the bike share has sufficient insurance to cover damage to the equipment or whether the financial troubles facing Bixi might be a cause for concern.

Bixi spokesman Michel Philibert said the Canadian company had no comment .  He instead referred all questions to Alta, which has not responded to repeated requests for comment from Gotham Gazette since the bike share was delayed this past summer.

In previous comments to Gotham Gazette before Friday's announcement of the new delay, Seth Solomonow, a spokesman for the DOT, said the bike share would someday bring New Yorkers a new, affordable transportation option at no cost to taxpayers and with profits shared with the city — emphasizing that the structure of the deal guarantees that there will be no city outlay to support the system.

On Friday, the DOT said Sandy's storm surge in late October flooded Brooklyn's Navy Yard, where "two-thirds" of the bike share's equipment was being stored, causing damage to bike frames and hardware.

“Despite the damage, New York will have the nation’s largest bike share system up and running this spring," said DOT Commissioner Janette Sadik-Khan, in a statement.

Andrew Brent, a spokesman for the main corporate sponsor, Citi Bank, said Friday that they were still committed to the New York City program in spite of the delays.

Much of the outcry about the delays with the eagerly awaited program has been due to a dearth of information about its progress coming from either DOT officials or the various companies involved in its stewardship.

But the concerns about transparency are not just in New York City. In Montreal, city officials there are also frustrated about the lack of information about how the Bixi program — and, thus, Montreal taxpayers — benefits from its international activities.

Turcotte, who is in charge of the Bixi probe, said she did not know how far along BIXI was in the sale process. But she said that the contract binding BIXI and Alta "could be part" of any sale.

Turcotte said they hadn't been able to obtain information on the consolidated activities of PBSC in Montreal and other cities and how it impacts the local organization that is backed with Montrealers’ money.

"We have been very vocal on this front, but it seems to be part of the culture of the party in power," she said, referring to the administration of former Mayor Gerald Tremblay, who resigned Nov. 5, following allegations of corruption. Tremblay had been Bixi's biggest booster.

There were plenty of red flags about the financial situation facing Bixi for any official in New York City to weigh into any decision regarding giving Bixi's U.S. partner, Alta, the concession.

A 2011 report from the City of Montreal's auditor general brought to light the fact that the city of Montreal was not in conformity with Quebec law, which states that a city can't be using public money for commercial activity — which it has done in several cities with the bike share.

Later, when a rescue plan of $108 million was designed in which the city of Montreal would lend $35 million to Bixi, Quebec's government demanded first that the city follow the auditor's recommendation and make sure it was in conformity with the law. It wasn’t clear at the time, but a sale was just an option, not an obligation in itself.

That point had since been clarified before the sale process began. Regardless, the city has gone ahead anyway and requested PBSC to sell its international arm.

PBSC/Bixi is also being sued by a software company that had developed the original software that ran its payment terminals, solar energy control and other elements of the bike share systems it sold to cities in theU.S. PBSC/Bixi ditched the software company and began to develop its own solutions from the ground up, which contributed to the delay in New York City.

Former Montreal Mayor Tremblay had maintained his support for keeping the international arm, saying in a press release this past June  that "international activities such as New York and other US cities finance the local bike-share system in Montreal."

The May 2011 financial package that the City of Montreal had put together included a $37 million loan with $71 million in loan and credit-line guarantees to expand the international arm in places such as New York. At the same time, the Canadian press was having a field day reporting on financial troubles facing Alta's supplier.

According to language in the New York bike share RFP, initial proposals were evaluated by an evaluation committee. That committee was assisted by technical advisors who may have included representatives from other city agencies and public entities.

The technical evaluation accounted for the initial ranking, which narrowed all the bidders down to three companies who were then shortlisted for further evaluation of their business models.

At 35 percent, "demonstrated financial capability" was the single biggest determining factor for the short list, followed by proposed levels of  investment to capitalize the system; value of the system services provided to the public; and the amount of revenue offered to the city.

Ross Sandler, director for the Center for New York City Law at the New York Law School, (who has not read and is not familiar with the the bike share RFP or contract) explained that the term "demonstrated financial capability" is simply a legal term of art. It basically means the bidding company needs to be able to fulfill the terms of the contract. He said the city can ask for whatever it wants to determine a competing bidder company's financial health.

"That bidder has to demonstrate that it's responsible," Sandler said. "One of the aspects of being responsible is having the financial wherewithall to carry out the contract."

But, he said the decision about whether a bidder is responsible is within the city's discretion. Sandler explained that there are a wide range of factors the city can look at when making that determination, including its past performance.

In September 2011, the city's DOT named Alta the vendor for what was set to be the nation's largest bike share program.

Cody Lyon is an avid New York City cyclist and freelance journalist for TechPresident, Wine Enthusiast, the Real Deal and the Biz Journals.