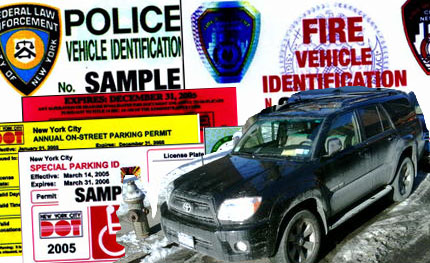 In early January 2008, little more than one year ago, Mayor Michael Bloomberg, Police Commissioner Ray Kelly and Transportation Commissioner Janette Sadik-Khan announced a plan to scale back a program that is a cherished perk for city employees and an infuriating irritant to the rest of us. The three officials said they would "reduce the number and misuse of government parking placards" -- the often misused permits that allow city employees to park their vehicles in designated areas and at metered spaces free of charge for an indefinite period of time.

Citing efforts to "reduce traffic congestion, decrease the city's carbon footprint, encourage the use of public transportation and reduce the demand for curbside parking in connection with city business," the trio held a press conference and pledged to reduce the number of city-issued placards by 20 percent, prosecute individuals using counterfeit placards or misusing valid ones, and conduct a thorough review of citywide parking allocations and regulations.

A year later, city officials point to substantial progress. But community activists, from Parkchester to Chinatown, say that despite tough talk and some decisive city action, the problem has not gone away.

"I still feel like a prisoner in my own apartment and can't, on the best days, park in my own ZIP code, while placard abusers have carte blanche here," said a disgruntled Upper East Side resident, who asked to remain unnamed. "A no parking area is a free parking area for them," he added.

A Brief History of Parking Placards

Parking in New York City has been the subject of a Calvin Trillin novel, the set-up for a memorable Seinfeld episode and the cause of much malfeasance. It's an obsession for most drivers and has significant impacts on pedestrians, cyclists and transit users. It should come as no surprise then that the use of parking placards has long been hotly contested.

For years, local reporters like David Seifman of the New York Post and Pete Donohue at the New York Daily News published hard-hitting stories about the use and abuse of city issued parking permits, and community groups like the Brooklyn Heights Association and Lower Manhattan's Civic Center Resident's Coalition did their best to call attention to the issue. Not until Transportation Alternatives released Uncivil Servants, a snap-shot survey of parking placard abuse in Chinatown, though, did the public have data thorough enough to detail the extent of the parking placard problem.

That survey was followed by the September 2007 publication of another Transportation Alternatives report, titled "Above the Law," that found "77 percent of permit holders use them illegally" and the launch of uncivilservants.org, a user-driven anti-placard Web site. By the winter of 2007, the parking placard issue had been cemented in the public's consciousness.

The Problem with Placards

In addition to the obvious "it's unfair" argument that surrounds the parking placard debate, advocates maintain that the inappropriate use of parking placards adds tens of thousands of additional vehicles to the city's already overcrowded streets. A 2006 study by Bruce Schaller, now deputy commissioner of planning and sustainability at the Department of Transportation, found that if government workers commuted by auto at the same rate as their private sector counterparts, 19,200 fewer vehicles would enter Manhattan every day. The report concluded that the free and convenient parking that placards allow encourages many civil servants to drive. It also finds that $46 million a year in potential parking meter revenue is lost as a result.

Transportation Alternatives, in its numerous studies, also points to the dangers and inconveniences caused by illegally parked vehicles that go unticketed and untowed. One of the group's earliest press releases on the issue proclaims, "Such egregious illegal parking slows emergency response times, jeopardizes public safety, cripples truck and delivery traffic, impedes pedestrian flow, damages businesses and sends a message to community residents that their neighborhood is less important than the private vehicles of civil servants."

Residents of neighborhoods where illegally parked cars clog the streets have even stronger words. "This crap is a severe quality of life issue for residents like me. If I could come and go as I please and park anywhere at any time I would have a significantly better existence here," said the Upper East Side resident.

But some city employees, particularly teachers, firefighters and police officers insist that being able to park easily is essential to their jobs. The author of NYC Educator, a blog focused on education issues, sarcastically responded to the mayor's placard reduction: "Of course, it behooves a good teacher to spend 20 minutes trying to snag a parking space, or walk to school from Connecticut, if that's what it takes to maintain 'accountability.' You can't effectively implement 'reforms' if you don't thoroughly inconvenience unionized employees on a regular basis for no reason whatsoever."

Christopher Fenyo, a firefighter, offered another argument in a comment on the New York Times' City Room blog: "We are often detailed midtour to other firehouses when there is a fire somewhere else, and some firemen get hurt," he wrote. "We use our personal vehicle because it is, believe it or not, more efficient to go from Harlem to Astoria, for example, at 2 a.m., than it is to use mass transit (and if the fireman detailed doesn't have a car, one of those who do will often loan them theirs). That fire company is out of service until they are fully staffed." He continued, "So the faster I get there, the better for everyone, civilian and employee alike. It ticks me off when I see permits abused. And it rightly angers the public. But make no mistake, we need to be able to park cars."

In early 2008, when Bloomberg, Kelly and Sadik-Khan announced their plans, the stage was set for unprecedented action on the parking placard issue.

In mid-March, the Transportation Department followed up by releasing a comprehensive study of parking in Lower Manhattan that found fewer than 2,000 parking spots available to drivers without placards and more than 11,000 available to those in possession of them. In April, news came that the police department was aggressively cracking down on illegally parked cars with placards. The New York Post reported that 178 tickets were issued in a four-day Internal Affairs' sweep of streets in Lower Manhattan -- along with the arrest of a retired sergeant for using a fake placard.

Then in May came the meat and potatoes of the administration's plan: a drastic citywide reduction in the number of placards from 80,770 to 54,891, along with a pledge to cut the Department of Education's 63,390 placards by a similar percentage. By July, the Post was reporting that the police had issued more than 3,530 tickets to parking placard abusers over a three-month period.

The most recent numbers are even more striking. "The mayor's efforts have resulted in over 50 percent fewer placards being issued to city workers," according to Jason Post, a spokesman for the mayor. "To encourage compliance, a dedicated unit in NYPD's internal affairs bureau has issued over 6,000 summonses, and over 1,000 cars have been towed for placard violations."

As a result, he continued, "Neighborhood leaders have told city officials that they see a noticeable reduction in the misuse and abuse of placards, and with over 78,000 fewer placards on the street, it's easy to understand why."

Despite these efforts, critics insist that the most flagrant types of parking placard abuse, like parking in front of fire hydrants and employees' using placards after working hours, still go unchecked because many police officers turn a blind eye to benefit other cops, as well as city employees.

"On paper, the city has made enormous cuts [in the number of placards], and we give them credit for it," said Wiley Norvell of Transportation Alternatives, which will soon begin another citywide survey of placard abuse. "But without the day-to-day enforcement from NYPD to back it up, illegal parking and permit abuse are still rampant."

Some neighborhood residents are more explicit: "It has gotten worse," said Oscar Ruiz, who lives in the Parkchester section of the Bronx. "The same people, who I have pictures of from a year ago, have new placards and their committing the same violations. How can you park in front of a hydrant five days a week? I have pictures of that."

"I spoke with parking enforcement and they tell me they would like to give tickets, but they can't," Ruiz continued. "It's NYPD politics. They don't summons their own." For many residents, this is the sticking point: Despite the administration's efforts and the drastic reduction in the number of placards issued, the NYPD still shirks its ticketing duty.

Jan Lee, the owner of a Mott Street business and member of the Civic Center Resident's Coalition, said he has noticed some real change on Mott Street but worries about what will happen in this election year and what could come when a new commanding officer is appointed to head his local precinct.

"The issue is that all of a sudden there will be a huge blitz, but that can change with who's at the helm," he said. "That's why it's premature for City Hall to pat itself on the back."

To avoid such irregular enforcement, Lee and his colleagues want to get rid of the parking placards all together. In place of the permits, they suggest the city develop a 21st century system that would let civil servants who need to park for official business register their vehicle to a given space for a set amount of time using a telephone or computer, the city's 311 helpline and Department of Motor Vehicle information. Any ticket given to the vehicle while it was registered to use a particular space would be void, but a ticket given afterward would be as valid as any other.

"What this would do is discourage government employees from using cars and abusing parking privileges," Lee said. "More importantly, taking away the physical reminder -- the placard itself -- would remove a degree of intimidation for those whose job it is to enforce the law."

According to Lee, the mayor's office was not receptive to the idea. "We mentioned this to (Deputy Mayor) Ed Skyler and he laughed in our face. They don't want to give up a bargaining chip," he said, referring to the value of placards in union negotiations and during an election year.

How all of this -- the elections, appointments of future commanding officers and new technologies -- will affect the placard problem is anybody's guess, but what seems quite certain is that the issue will continue to raise tempers on all sides.