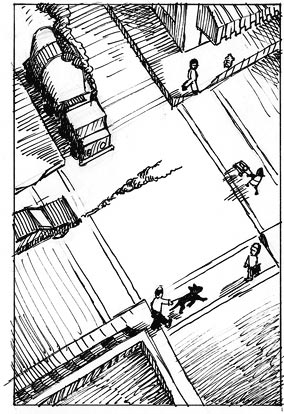 Eleven-year old Christopher Adam Scott rode his bicycle across the pedestrian overpass of the Clearview Expressway in Bayside. As he reached the corner of 46th Avenue and the expressway service road, a car struck him, killing him almost instantly.

Six years before, 12-year-old John Shim was riding a bicycle in the same spot. He too was struck by a car and died of his injuries nine months later.

Local residents believe a stop sign could have helped save the lives of both boys.

But stop signs cannot solve all traffic safety problems, transportation experts say. For example, the U.S. Department of Transportation, which sets standards for stop signs and traffic lights, cautions, "Stop signs should never be installed as a routine, cure-all approach to curtail speeding, prevent collisions at intersections, or discourage traffic from entering a neighborhood."

And when they are misplaced, stop signs can make a situation worse. "Studies have found when stop sign are placed at intersections where they are not really needed, motorists become careless about stopping," says an information sheet issued by the Center for Transportation research and Education in Ames, Iowa.

The department refers the request to the Traffic Engineering Unit in your borough. That office makes a preliminary study of the street corner in question, including traffic and pedestrian volumes, vehicular speeds, accident history and sign spacing. Eventually the unit will conduct a field investigation to observe traffic on the street corner at various times and on different days of the week, over a period of several weeks.

The inspectors want to determine whether conditions at the intersection meet federal standards for traffic lights and signals set out in the Manual on Uniform Traffic Control Devices published by the U.S. Department of Transportation.

The investigation takes about six weeks. Then, if the department approves the request, an installation will be scheduled. The sign is usually put in within three or four months.

This sounds efficient and thorough, but is it really?

Not exactly, says Roe Daraio, longtime activist and president of COMET: Communities of Maspeth and Elmhurst Together.

Daraio estimates that 95 percent of her requests for stop signs have been fulfilled. "You just have to be a little creative," she says.

COMET keeps a close watch on corners and records problems, listening to accident reports on a police scanner. "You should always be able to say what dates and times the accidents occur," says Daraio. "The more clearly you express (the problem) to the agency, the more likely they are to respond."

Typically, she writes to the head of the Queens Borough transportation office, Joseph Cannisi, rather than to Commissioner Weinshall, as the city guidelines suggest. Since Weinshall's office receives thousands of requests each year and forwards them to the boroughs, Daraio says, writing directly to the borough office eliminates one step.

Daraio also advises that the letter provide as many details as possible about the street corner, such as how many children live nearby or if there is a school. She strongly suggests enlisting local community organizations in the quest, because they probably have a working relationship with key officials, as COMET does with Commissioner Cannisi.

The borough transportation office works closely with the local police precinct to assess the need for the sign. To get the police on your side, Daraio advises reminding the police of the frequency of accidents on your specific corner.

Sometimes, DOT decides to install a stop sign — even if community residents would prefer another remedy such as a traffic light. That is fine with Daraio.

"I find that when drivers see yellow lights ahead of them, they floor it,' she said. "We know night drivers don't come to a full stop at a stop sign, but at least they slow down a little."

In deciding between a stop sign and a traffic light, transportation officials consider the number of vehicles that go through an intersection as well as how fast they are traveling. Visibility and the presence of other traffic lights nearby can also affect the decision.

But evidence of need does not guarantee that the city will install a sign — or a signal. The intersection in Bayside where the fatal accident occurred still has no stop sign and does not seem likely to get one. Transportation Commissioner Weinshall told the Western Queens Gazette that, while "it's very tragic what happened with this little boy... federal standards were not met" for the installation of a stop sign or a traffic signal

No one has told community residents what precise conditions the intersection fails to meet.

Since the denial of the stop sign, the city transportation department has taken several steps to try to make the intersection safer. It has, for example, installed cone shaped objects to guide oncoming traffic away from the pedestrian bridge and posted a sign on the bridge advising bikers to get off their bikes and walk across the overpass.

Community residents would prefer a stop sign. And at least some of them think they know why their request was rejected. "This is how politics works — red tape," local Democratic Party activist John Bisbano told the Western Queens Gazette. "All they know is numbers."

(Do you need a stop sign in your neighborhood? Tell us about it by going to the Community Gazette for your area.)