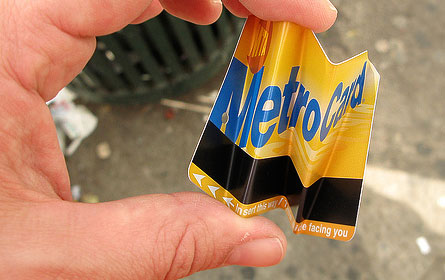 New York City straphangers won’t see their fares skyrocket or their service slashed next month. That much seemed certain after Gov. David Paterson Thursday signed a bill to bail out the Metropolitan Transportation Authority. Just about everything else surrounding the MTA's future and the service it provides to millions of New York transit riders, however, remains up in the air.

Critics from various camps challenged almost every aspect of the bailout bill: the way it was negotiated, the fees and taxes it implements, its short and long-term efficacy, and the effect it might have on New Yorkers' travel habits. To further complicate the picture, the MTA's chief executive officer resigned the same day the bailout passed.

The future health of the MTA will depend on, among other things, the economy, the state's next round of elections and the federal government's interest in increasing aid to the authority. The bailout bill, though, will play a major role. So how will it work and what do its supporters and detractors say about it?

Through a series of taxes and fees to be applied in the 12 counties served by the MTA, the state Legislature aims to raise about $1.8 billion for the cash-strapped authority. The bulk of the money will come from a 0.34 percent payroll tax ($3.40 per $1,000) applied to all businesses including the self-employed, except for schools, which won a reimbursement clause in negotiations. This payroll tax is estimated to raise $1.53 billion. The rest of the money -- totaling a little more than $270 million -- will come from additional fees on driver's licenses and learner's permits ($2), vehicle registration ($25), yellow-cab trips ($.50) and an additional 5 percent sales tax on car rentals.

Although the bill does not establish how much MTA fares and tolls will increase -- the authority’s board makes that decision -- it has been widely reported that, in the wake of the bailout bill, the single-ride fare will increase to $2.25 from $2, the cost of a 30-day MetroCard will increase $8 from $81 to $89, and other fares, such as bridge and tunnel tolls, Access-A-Ride trips and commuter-rail tickets, will increase about 10 percent. This is appreciably less than the 20 to 30 percent increases called for in the MTA's doomsday plan.

The more modest increases will raise about $500 million per year for the authority and help stave off the service cuts proposed in the doomsday plan. Additional hikes are scheduled for 2011 and 2013.

The bailout bill also mandates a series of reforms intended to bring more accountability and transparency to the MTA. Measures aimed at curbing abuse include an annual forensic audit of the authority by the state Legislature, a clear and public policy on the granting of privileges and benefits to authority employees, such as using livery cars and authority-owned automobiles, as well as a whistle-blower provision that ensures contractors receiving MTA funds provide workers with information on how to report fraud or waste.

The bill seeks to improve transparency and accountability by calling for the regular posting and reporting of revenue and expense targets, updated financial projections and gap-closing initiatives in, as the floor memo insists, "plain English."

The bill also consolidates the positions of MTA chairperson (a job still held by H. Dale Hemmerdinger) and MTA chief executive officer (the post from which Elliot "Lee" Sander resigned), a move seen by some as a harbinger of Sander's abrupt departure.

The pride expressed by the legislators who eventually passed the MTA bailout bill seems to have little foundation in fact. Even advocacy organizations that went to the mat during its passage have measured praise.

In their comments on the rescue, most credit the legislators for taking action, but express reservations. Mary Barber, managing director of Living Cities for the Environmental Defense Fund said in a representative statement, "Our political leaders deserve credit for ending this crisis for today. However, we remain concerned that the MTA capital plan is not fully funded and that the continuing downward economic spiral leaves the MTA's financial situation vulnerable. Identifying dedicated, long-term revenue sources in order to maintain the health and affordability of our transit system must remain a high priority for the governor and state legislators."

On the other hand -- and seemingly voicing the more popular point of view -- are the plan’s critics. Suburban representatives, cab-drivers’ groups and advocacy journalists imply the bailout bill violates a traditional tenant of dedicated-tax policy: that the thing being taxed ought to have an immediate and demonstrable relationship to the thing receiving the money from the tax, or at least induce beneficial behaviors related to the thing receiving revenues.

The Senate voted along party lines on the bailout, with all 32 Democratic members giving the bill their blessing. But some dissenting Assembly Democrats -- 15 voted no -- harshly criticized the plan, charging that the payroll tax places too great a burden on areas that receive few services from the MTA. Assemblymember Sandra Galef, an Ossining Democrat, told the Poughkeepsie Journal, "The further out you get from the city, the less connection there is between businesses and transit. There's no connection between transit and a hardware store in Putnam Valley." Republican Sen. Steve Saland of Poughkeepsie concurred, claiming that Dutchess County was a "revenue hostage" of the MTA.

Bhairavi Desai, the executive director of the Taxi Workers Alliance took issue with the bill's $.50 surcharge on every yellow-cab ride, telling the Daily News that it was not fair or feasible to collect. "They are not looking to do the right thing or the fair thing," she said. "They want to do the easy thing."

Most pointedly, Aaron Naparstek, editor-in-chief of the Website Streetsblog, said, "What is most striking about this deal is the way in which it punishes New Yorkers who don't own cars. If you're someone who gets around via mass transit, taxis and rented cars, the state Legislature has just socked you with a bunch of new fees and taxes. If, however, you regularly commute over the East River bridges in a gas guzzling 2008 Cadillac like, say, state Sen. Carl Kruger, you can still do that for next to nothing. When it comes to transportation policy, it's almost as if the New York State Legislature is living in 1956 when gas was a nickel a gallon, rush hour was actually only an hour and climate change meant that you better not forget your umbrella when you left your house in the morning."

There are also questions and criticisms concerning how much funding the rescue plan will actually bring in and where it will go.

William Neuman and Nicholas Confessore of the New York Times point out that the amount that will be collected through the bailout plan this year -- about $1.1 billion -- is a far cry from the $1.8 billion that state legislators keep claiming their bill will generate annually.

This is in part a result of vague language (the need for "plain English" comes to mind). In addition, while earlier versions of the legislation retroactively applied the payroll tax to wages earned since Jan. 1, the final bill applies only to wages since March 1. Thus the actual amount raised will be less than originally estimated. Neuman and Confessore also report that the taxi surcharge will not be collected until January 2010, further reducing the amount of money generated in the short-term.

However much the bill actually brings in, some experts believe it will not solve the authority's basic problems. John Petro, an urban policy analyst at the Drum Major Institute wrote that the “plan does not address the root cause of the MTA's budget troubles: an over reliance on debt to finance the transit system's maintenance, repair and expansion. Albany's plan would force the MTA to continue to borrow for these needs, increasing the already crushing debt burden. Without long-term investments in capital needs, the MTA will forever be facing budget shortfalls, deferred maintenance, crumbling stations and stalled projects." He added, "We will be back at square one soon enough. This vicious cycle needs to end."

In the view of some political insiders, the bill's shortcomings are a direct result of how it was negotiated. They fear the horse-trading over the bailout signals a new era in Albany politics, one that could be even more self-serving and craven than previous regimes. These observers attribute part of the problem to the Democrats' two-vote edge in the Senate. The Senate majority can pass a bill only if every Democrat agrees to it or if the Democrats manage to gain some defections from Republican ranks. On the bailout, for weeks the Democrats leadership proved unable to move the party in unison, lengthening the process.

In an excellent piece in the Observer, Jason Horowitz and Jimmy Vielkind quote Gene Russianoff of the Straphangers Campaign as saying, "Things have gotten unhinged. It has been really frustrating for advocates and public-policy people to think that two or three senators can hold up the whole thing."

An advocate with intimate knowledge of the process said on background, "We're not out of the woods at all. It's just not clear that this [bailout] is going to fly, and particularly that this is going to support the capital plan. All they [the state Legislature] has done is push out all of the hard choices until after their next election."

Certainly, the MTA bailout bill isn’t the most popular piece of legislation passed this year. Even those in positions that would seemingly obligate them to support any strategy that keeps fares low and eliminates the threatened service cuts commend the rescue plan carefully.

Former MTA chief Richard Ravitch, who at the behest of Gov. Paterson laid out an alternate funding plan including East River Bridge tolls, "was disappointed that the bill only funds two years of the capital plan, but said the rescue needs to happen," according to the New York Post.

Mayor Michael Bloomberg told reporters in Atlanta, "Look, while it's not perfect and it's not everything that we would want ... something had to be done."

And, indeed, something was done. Just how effective it will be, only time will tell. What’s certain is that the next time the MTA is in a heap of budget trouble, there will be lots of people with lots of divergent views waiting in the wings and wondering whether they will be able to take center-stage, bow and loudly proclaim, "I told you so." With so many voices making such diverse claims, surely someone will have that odd honor.