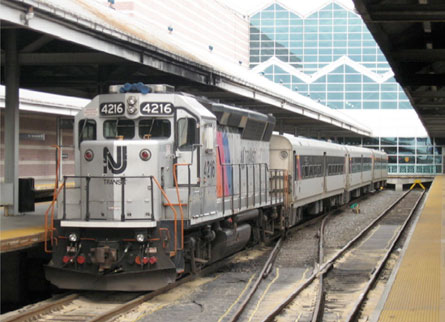 The largest transit public works project in the country held its groundbreaking ceremony on the western shore of the Hudson River just two months ago. The Mass Transit Tunnel, the venture's third name in 15 years, is a fully-funded $8.7 billion trans-Hudson rail link connecting the west side of Manhattan to northern New Jersey.

Its many powerful proponents, including the governors of New York and New Jersey, numerous elected officials from both states, the Federal Transit Administration, the Port Authority of New York and New Jersey, the New Jersey Turnpike Authority -- all of whom have contributed funding to the project -- as well as countless advocacy groups assert that the new tunnel will speed commutes, ease congestion, create jobs and provide environmental benefits.

As is to be expected with a project of this size, the plan has its critics, too. Some of the more vocal naysayers meet on the fourth Wednesday of every month in Lower Manhattan under the moniker the Regional Rail Working Group. These dissenters don't dispute the need for a second commuter rail tunnel under the Hudson. They do, however, believe the current plan isn't worth its price tag, and they're telling everyone they can, including Obama Administration appointees.

In the past 25 years, the number of people passing through the existing two-track, century-old rail tunnel connecting northern New Jersey to Penn Station has more than quadrupled, soaring from roughly 10 million in 1984 to about 44 million today. Every hour, 23 New Jersey Transit trains pass through the old tunnel during rush hour, and as any regular rider can attest, that's a recipe for delays.

While Metro-North commuters are graced with an on-time performance rate of around 97 percent, their New Jersey bound cohorts on the Northeast Corridor line have a rush hour performance of 85.09 percent, according to the Asbury Park Press.

In addition to nearly doubling capacity, the new tunnel will ease the minds of many safety-minded commuters and elected officials, pull nearly 22,000 vehicles off the road, reduce greenhouse gases emitted by 67,000 tons, and generate and sustain 6,000 jobs through the construction phase and 44,000 jobs when completed.

So What's the Problem?

George Haikalis, president of the Institute for Rational Urban Mobility, a New York City-based nonprofit transportation group, and chair of the Regional Rail Working Group, wants a new tunnel. He wants better transit, cars off the roads, greenhouse gases reduced and safety concerns ameliorated. He just thinks there's a better way than the current iteration of the Mass Transit Tunnel.

Haikalis asks, "If we're going to spend nearly $10.5 billion on this project, I'd like to make it's as good as can be. Isn't that commonsense?" His significantly higher cost estimate includes the rehabilitation of the Hackensack River's Portal Draw Bridge -- an "unfunded, but absolutely necessary" $1.7 billion link to the tunnel's New Jersey entrance.

He and the working group believe that the tunnel, which as now conceived ends at 34th Street and Seventh Avenue about 180 feet below ground and connects to Penn Station by a series of escalators, should link directly with the tracks there and continue on to Grand Central Station. "It would be the mother of all train station connections," he says, adding that it would be "the obvious choice for regional rail advocates."

For Haikalis, Penn Station should act as a "through station" for New Jersey Transit, as it does for Amtrak, with another stop at Grand Central and then a turnaround at a rail yard somewhere north or east of the city. Then regional connectivity would be a reality -- a simple transfer, not two trains and an uptown then cross-town subway ride -- could get one from Trenton to New Haven.

And to some extent most agree that Haikalis and the Regional Rail Working Group are right. New Jersey Transit's press release for the groundbreaking ends, "The project has been designed to allow for expansion in Manhattan to the east in the future as conditions and funding permit."

Neysa Pranger of the Regional Plan Association said, "We absolutely believe the tunnel should continue to Grand Central Station, but that's a second stage. We certainly don't think the current environmental impact statement should be ripped up."

And that's the real sticking point. The Regional Rail Working Group's vision centers on a tunnel that comes into Penn Station at a shallower depth than the current version in order to physically connect the new tracks with already existing ones, which would facilitate through-travel, smoother transfers and shorten the time it takes commuters to reach the surface, which Haikalis estimates to be an additional four or five minutes. It also requires interoperability between Metro-North trains and tracks and New Jersey Transit trains and tracks at Grand Central Station. Although much of this would not require a return to the drawing board -- this alternative was put forth in a 2003 tunnel plan -- it would require a great deal of cooperation between Metro-North and New Jersey Transit, as well as a new environmental impact statement, which would negate most, or all, of the already-secured $8.7 billion for the project. In the minds of everyone but the most optimistic, then, the plan will surely proceed as is.

"People have said about my efforts, 'The perfect is the enemy of the good,'" Haikalis said to me in a recent phone conversation. "Well, I think that's a stupid way to discuss something, and we're not talking about perfect. We're talking about what's better. Much better," and with that in mind, he and the Regional Rail Working Group are continuing on their quest.

"We had back-to-back meetings with President [George] Bush's Railroad and Transit people about this, we've already met with Obama's Deputy Secretary for Transit Policy, and we have a pending appointment with the Federal Railroad Administrator next month. Whether the new administration will be willing to challenge states, and demand the most for their money, we'll see," he said, sounding quite confident.

Peter Rogoff, President Obama's Federal Transit Administrator attended the Mass Transit Tunnel's groundbreaking, where he said, "The Obama administration is thrilled to partner with New Jersey to build this truly transformational investment. It will improve the lives of thousands by shortening their commute. And best of all, it will create jobs now. The Obama administration is committed to seeing this project through to its completion."

And although that makes it sound like plans for the Mass Transit Tunnel won't be changed any time soon, Haikalis and his colleagues are convinced that history will judge them favorably, and if things aren't changed, commuters of the future will have another reason to shake their fists.