Unless you are a real policy wonk, you probably are not aware of the most important transportation issue in New York City this election season. No, it is not the well-publicized debate over metered parking on Sunday, an issue that has a relatively tiny impact on the daily lives of New Yorkers and even less on the growth of our economy. The far more pressing issue is a transportation bond act that is vitally needed to restore, maintain and expand the transit system. But, unlike Sunday parking, it has garnered almost no attention just weeks before the election. On behalf of the large and diverse Vote Yes for Transportation Campaign, I urge you to do just that on Proposal 2 this Election Day.

The Rebuild and Renew New York Transportation Bond Act of 2005 is critical to funding the state’s five-year transportation needs, helping to provide congestion relief, safe roads and expanded public transportation service for all New Yorkers. The $2.9 billion act is split evenly between Metropolitan Transportation Authority transit improvement and highway projects that touch every corner of the state, improving mobility while fueling economic growth, creating jobs and protecting the environment. The state’s 2025 Transportation Blue Ribbon Panel warned last year that the entire transportation network is in danger of deteriorating without significant funding, and the bond act is a key part of that funding package.

That is why nearly every elected official in the state -- including Governor George Pataki and Attorney General Eliot Spitzer, Mayor Michael Bloomberg and challenger Fernando Ferrer, Senate Majority Leader Joseph Bruno and Assembly Speaker Sheldon Silver, and City Comptroller William Thompson â€“ supports the bond act. Other backers include labor, business, civic and environmental organizations, from the state AFL-CIO to the Partnership for New York City, from the New York Building Congress to the Regional Plan Association and the League of Conservation Voters. 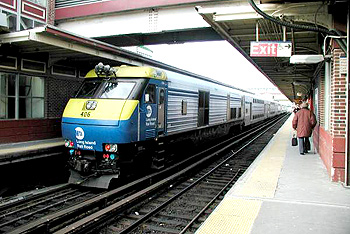 There are plenty of reasons why New York City residents should support the $2.9 billion act. First on the list is $450 million to restore and maintain the aging transit system that makes the city possible. This money will pay for new subway cars and buses, track repairs, tunnel lighting, a bus locator system, and Staten Island Railway bridges. The past year has brought numerous examples of the system’s fragility, from track fires to derailments, and the safety of all straphangers is at stake.

The second reason to support the bond act is the $900 million it will provide toward the first significant expansion of the subway system in more than 60 years. These funds will be split between East Side Access (which brings Long Island Rail Road trains into Grand Central) and the first phase of the Second Avenue Subway, two projects that will greatly expand the capacity of the transit system and provide critical redundancy in case of natural or manmade disaster. For example, if there were an incident on the East Side today, the entire Lexington Avenue line would be shut down, crippling movement and the economy. But in the event of such a problem, the 2nd Avenue Subway could continue to carry passengers along the East Side. Similarly, the Long Island Rail Road extension would provide back-up commuter rail service during a major disruption at Penn Station. Both of these projects have languished for decades, but that should not be an excuse to reject them. They are critical to the growth of the region’s economy and our safety, and their completion will be nearly guaranteed if the bond act passes.

THE DANGERS OF DEFEAT

Finally, we must consider what would happen if the bond act does not pass. The $450 million for maintenance of the subway system would have to be found elsewhere. That would likely set up a choice between two unpleasant options. On the one hand, the MTA could fill the gap by issuing more of its own debt, putting further pressure on its operating budget and leading to even more fare hikes. On the other hand, the MTA could fill some of the gap by choosing not to fund other items already in its capital plan, such as the station rehabilitations that are so important to many city neighborhoods. In either case, an already decaying system will become more vulnerable and slide further toward the disrepair that plagued it in the 1970s. No one wants to go back there.

The $900 million that the bond act sets aside for expansion is unlikely to be replaced if it fails, causing the state to lose $4 billion in federal funds that were headed our way. Washington is waiting for the state to match some of that money, and, if we don’t, the federal funds will then go elsewhere. More importantly, if voters reject the bond act, we would lose the opportunity to expand a transit system that is no longer able to accommodate its current ridership and is certainly not prepared for the economic and population growth that the city envisions -- on the Far West Side, in Lower Manhattan, East Harlem, 125th Street, Downtown Brooklyn, Greenpoint/Williamsburg, Flushing and in so many other places.

A REASON TO BORROW

Some people will undoubtedly argue that the state’s system of borrowing money is in need of reform. They are absolutely correct. New York must address “back-door” borrowing, where the state’s public authorities pile up debt with no voter approval and little involvement from elected officials. But this bond act is different. Long-term borrowing for transportation infrastructure will always be appropriate, and the needs of our transportation system are too urgent and important to hold hostage to a reform effort that will be not be completed this season.

We have much to gain from a healthy and growing transportation system and too much to lose if we fail to keep that system running at a world-class level. On November 8, New Yorkers have a chance to show how important transportation is in our daily lives. Vote yes for transportation. Vote yes on Prop 2.

• The Transportation Bond Act: Vote No by Nicole Gelinas

For more information in favor of the Transportation Bond Act:

â€˘ Vote yes for Transportation
The coalition supporting the act

â€˘ Debt We Can Live With: Front-door Borrowing for Transportation
A Newsday editorial