Gotham is an old city with an aging physical infrastructure. But the state’s $2.9 billion Transportation Bond Act, which will be on the November 8 ballot as “Proposal No. 2,” is not the best way for New York City to get the money it needs for its vital transportation assets.

The city certainly does need money for its mass transit, roads and bridges. New York’s subway system, parts of which turned 100 years old last year, needs $18 billion in investment over the next four years just to maintain its current state of repair. More than half of the city’s bridges are considered to be in less-than-stellar condition, and some are actively deteriorating.

But the transportation bonds on the ballot, if approved, will be issued by the state, not the city. The state doesn’t have infinite funds, and thus should make each dollar go a long way. But, despite this, it has not prioritized its proposed transportation-infrastructure investments according to urgent need.

What does this mean for New York City?

The city’s subways, roads and bridges will receive about $1.6 billion of the bond proceeds. At 55 percent of the total, this doesn’t sound like such a bad deal â€“ especially in light of the fact that city residents, workers and businesses pay a little less than half of state taxes.

But the problem is that of that $1.6 billion earmarked for New York City, the bonds provide only about $700 million in funding for projects that the city needs completed now. So, in effect, New York City taxpayers will pay about $1.3 billion (their share of state taxes to fund the bond issue) in order to get back about half that in investment so critically necessary that it justifies new debt.

To wit: The bond act would provide the state-run Metropolitan Transportation Authority with $450 million to maintain the MTA’s core infrastructure, much of it within New York City. This means hundreds of millions of dollars for such mundane but crucial investments as new subway cars and buses, track replacement, tunnel lighting and other maintenance.

But the bond act would provide a further billion dollars for several pie-in-the-sky expansion projects at the MTA: $450 million each for the Second Avenue subway (from the Bronx to Lower Manhattan) and for the East Side Access project (to connect Long Island Rail Road commuters to the East Side of Manhattan), and $100 million for a rail link from Lower Manhattan to Kennedy Airport.

Any one of these expansion projects might be worth seeing through to completion â€“ but neither the city nor the state has committed to doing that. The Second Avenue subway, for example, will cost $16 billion. 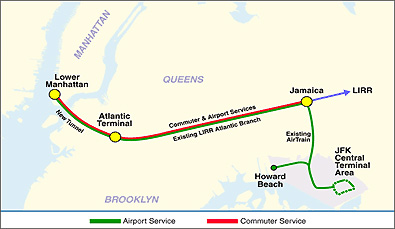 In a rational world, the city and state would pick one of these projects â€“ and make room in the budget to raise the capital necessary to build it. But each Albany official has his pet New York City project (Assembly Speaker Sheldon Silver likes the Second Avenue Subway, while Governor Pataki likes the rail link to JFK), so no single project ever gets enough funds to make real progress.

Until the state and the city can figure out which of these three multibillion-dollar projects it likes best, the MTA would do better to commit the entire $1.45 billion raised through the transportation bond act to making critical investments in the assets it already has, to ensure that New Yorkers can depend on a reliable transportation system.

What about roads? Of $1.45 billion earmarked for roads and bridges statewide, the city will get $273 million, or 19 percent. Some of the projects involve work on critical arteries in and out of the city: $81 million to rehabilitate the Van Wyck Expressway in Queens and $23 million to make repairs to the Henry Hudson Parkway between Manhattan and the Bronx. But at least one major project is not quite so critical: $19 million for a “green oasis” in the Bronx.

And to get its $273 million, the city must help pay for $1.2 billion road projects outside the city, including $21.5 million for 11 miles of new hiking trails in Washington County and a new pedestrian bridge near the Erie Canal.

These initiatives, and dozens of relatively small upstate road projects, may indeed be worthy â€“ and no one is suggesting that upstate be deprived of infrastructure critical to its economy, or that the congested Bronx be deprived of green space.

But the state has so badly mismanaged its finances in recent years that it already has far too much long-term debt: more than $48 billion, which puts it fifth in the nation in terms of debt per person. According to state Comptroller Alan Hevesi, only about half of that debt was for prudent investment in long-term capital assets like transportation infrastructure â€“ another 20 percent was for day-to-day operations, and another 25 percent was to fund state and local programs that should be paid for upfront.

Thus, it is not prudent for the state to raise new debt for worthy “extras.” Every penny should go toward the critical infrastructure that is badly in need of maintenance and repair.

Hiking trails and greenways are great â€“ but the taxpayers who want them should pressure their local politicians to pressure Albany to get the state budget under control, so that we can afford to help pay for them without breaking the bank. If Albany were to cut its bloated and fraudulent Medicaid program by 15 percent, for example, state and local governments would have an extra $3 billion each year to fund smaller capital projects upfront.

This would send Albany a message: No more debt until state leaders reform the budget to get the debt we have under control.

Nicole Gelinas, a chartered financial analyst, is a senior fellow at the Manhattan Institute and a contributing editor to City Journal magazine.

For more information against the Transportation Bond Act:

â€˘ New York's Endangered Future: Debt Beyond Our Means (in .PDF format)
A report on state borrowing by the Citizens Budget Commission

â€˘ No on Prop 2
A New York Post editorial Â