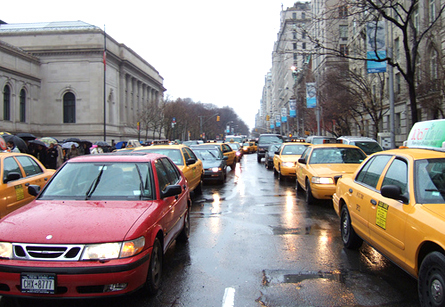 The New York City Department of Transportation, of which I am the commissioner, is responsible for among other things, the Staten Island ferry, nearly 800 bridges, 6,000 miles of roads that contain 1.3 million signs and 12,000 signalized intersections, and 65,000 parking meters. It is a transportation network that, for the most part, was put in place decades and even centuries ago. We have not built a new highway in this city in nearly 40 years. We haven’t added a major subway line since the 6th Avenue line in the 1940s. Our infrastructure requires an enormous investment just to maintain a state of good repair.

The magnitude of our facilities and the investment they require is only part of the story. New York is one of the densest cities in the world. While Chicago has a population density of 13,000 people per square mile, London 14,000, and Mexico City 15,000, our city has about 26,000 people per square mile and Manhattan nearly 67,000. And that is just the people who live here. Over 2 million people from outside Manhattan enter the central business district every day. Not surprisingly then, the space the Transportation Department is responsible for teems with activity: pedestrians, cars, cyclists, trucks, construction and commerce.

Every day the city makes changes about how space is used. These decisions have an enormous impact, not only in how we travel but on how we work and how we play and how we live. Following are some of the initiatives we have completed or begun and some new efforts we will focus on in the weeks, months and years ahead:

While the Metropolitan Transportation Authority provides bus service, the ability of those buses to serve New Yorkers depends on their ability to move through our crowded streets. In the last two years, along with the state transportation department, the city and MTA have been working hand in hand on a bus rapid transit initiative. We will introduce measures to allow buses to move more quickly, including colored bus lanes, improved bus lane enforcement, signal prioritization, wider bus stop spacing, next-bus information, and quicker fare collection, Very shortly, we will announce five corridors for pilot bus rapid transit. We expect to implement plans for two of the corridors by fall of 2007.

Buses are not the only mode we are trying to make more viable. Last month, the transportation department, along with the parks and health departments, took significant steps toward better safeguarding NY cyclists. This administration released a study of bike fatalities and injuries that a leading bike advocacy group here called “the most thorough analysis of cyclists’ serious injuries and fatalities in the United States.”

The report confirmed the importance of motorist and cyclist education, bike helmets and bike lanes. And it justified a plan to add 200 new lane miles of bike lanes, paths and routes over the next three years. We will be placing new “share the road” signs and markings, installing more bike racks and working with agencies and advocacy groups to conduct a bicycle safety campaign aimed at cyclists and motorists.

While we must try to increase cycling, bolster our transit system, and reduce auto use, truck traffic is likely to increase in the years ahead. Our population is growing dramatically and, with the lack of rail access, nearly 99 percent of our goods arrive by truck. That is why it is important to limit the number of trucks in residential neighborhoods.

We have also been focusing on how the delivery of goods and services affects the use of our curb space. For years, traffic engineers and economists have proposed creative curb-space pricing that would help move goods more efficiently. Our Midtown parking program does just that. It encourages truckers to rotate out of legal parking spots quickly, giving others an opportunity to load and unload. This cuts back on illegal parking and on the number of vehicles circling the block to find a parking spot. The program combines three elements: charging for commercial parking, placing multispace meters to free up more space, and a value pricing schedule to encourage truckers to get in and get out within an hour.

In Lower Manhattan, we have undertaken a comprehensive curb-space study. It will include a block by block survey of curb activity that will tell us where people are parking, where they are coming from, and how long they have parked. We hope this analysis can help inform new strategies for how to manage this valuable real estate.

But perhaps the most important step we have taken involving parking meters was in the interest of improving safety for pedestrians on Queens Boulevard. A few years ago, we narrowed the service road available to motorists by adding meters, an action that almost every Queens elected official said would be a mistake, claming it would slow traffic. It did. But along with improved signal timing, the installation of fees and other safety measures, this traffic calming dramatically reduced the number of accidents and pedestrian fatalities on the boulevard from a high of 18 in 1997 to one in 2004 to two in 2005.

But one pedestrian fatality is one too many. New York is above all a walking city. Efforts to protect pedestrians are the Department of Transportation’s most critical mission.

We have pursued many initiatives to better provide space for and protect pedestrians. And the numbers speak for themselves: In each of the last two years, pedestrian fatalities hit their low level since 1910.

But there is much more we can do to reduce fatalities, provide better access, and make us all feel secure when we walk our streets. We will be undertaking a number of initiatives to better serve those on foot in our city. They point to three key principles: focusing safety efforts where there is the greatest need; thinking of our public space beyond just parks and roads; making changes to our streetscape by challenging old paradigms.

In 2004, we announced our safe routes to school initiative to focus on safety improvements for our children. After studying the areas and the accident histories around the city’s 1,400 public, private and parochial elementary and middle schools we came up with a list of 135 priority locations. Our consultants have now come up with recommendations for over 90 of the 135, and we have begun to make improvements on these sites.

These measures include adjusting signal timing, adding school crosswalks and installing speed reducers. Most important, the plans call for a substantial amount of capital work on streets and sidewalks around these schools.

In the years ahead, we will perform similar work for the next 135 schools and for 40 of the city’s 400 high schools. And we have not neglected other school locations. We have, for instance, installed 69 speed reducers around other schools over the past four months.

Our work for pedestrians extends beyond safety. We are also looking to boldly reimagine how our street space is used. This past spring in Brooklyn, we created the Willoughby Street pedestrian plaza. In an area with low vehicular volumes and rampant illegal parking, we closed off streets and added tables, chairs and planters. We took away some road space but, in doing so, created a street that that now accommodates high pedestrian volumes and large lunchtime crowds, providing a safe and pleasant space to walk around or enjoy a meal.

Next month, we will create a similar space in front of Stuyvesant Town on First Avenue and we’ve also developed plaza plans for Astor Place and for Louise Nevelson Plaza in Lower Manhattan.

In the years to come, the department will work with communities and other city agencies to reallocate street space and create more of these public plazas in neighborhoods in all five boroughs. These open spaces will make walking more enjoyable, preserve neighborhood character, and can serve as the heart of a neighborhood through which all activity can pulse.

From Bowtie to Times Square Shuffle

Willoughby Street is one example of how a small regulatory change in the use of street space can have a dramatic impact. Anyone who has been on Broadway around 42nd Street knows that walking there often means standing, squeezing, and twisting your body to get through the crowds. To help mitigate this pedestrian congestion, we have extended sidewalk space in both Herald and Times Square and will soon be making these improvements with permanent materials.

Now another change is taking place. Back in 1964, the city created the Times Square bowtie. It gave traffic on Seventh Avenue and 45th Street the option of either staying on Seventh or switching to Broadway. Under the latest change, traffic on Seventh will have to continue into Broadway, while traffic on Broadway will have to continue into Seventh. We are calling this the Times Square shuffle and are making it for pedestrians. Because of it, we will be able to expand the pedestrian island between 45th and 47th Street. We will also push the curbs out, expand the sidewalks at several locations, and add three new crosswalks.

These steps will help relieve the pedestrian congestion and make the sidewalks safer, more navigable and more welcoming. By reversing one decision from a few decades ago, we can make a big difference I today’s world.

To find the other Times Square shuffles and the other Willoughby Streets while we undertake the enormous day to day operational responsibilities is not easy. That is why we’ve created a new Office of Strategic Planning. This unit is participating in the mayor’s long-term planning and sustainability initiative, which is considering what New York City must do to preserve and improve our high quality of life as the city grows to a population of 9 million.

This long-term effort is considering a wide range of strategies to shift travel away from the automobile and onto transit. I expect that its recommendations will include some big ideas and will pose some challenges to the way that we have dealt with our public space in the past.

Iris Weinshall is New York City transportation commissioner. This article is adapted from comments she made at “Manhattan on the Move: A Transportation Agenda for a Growing City,” a conference presented by Manhattan Borough President Scott Stringer.