New York City has the most bus riders of any city in the country -- but the slowest and most unreliable buses, according to city officials. Two and a half million people board New York City buses each day, then travel at an average of 7.5 miles per hour as their buses sit stuck in traffic, stopped at red lights or waiting for passengers to board.

"The buses are slow en route and in wait," said Gene Russianoff, attorney and chief spokesman for the New York Public Interest Research Group's commuter advocacy group, Straphangers Campaign. "It wouldn't hurt to have a copy of 'Gone with the Wind' if you're planning a long bus trip."

Almost 20 separate north-south bus routes in Manhattan require close to two hours to complete their 10-mile journey. You can take Amtrak 110 miles from New York to Philadelphia and enjoy an authentic Philly Cheese steak in about 90 minutes.

And the problem is getting worse. Incentives like free subway/bus transfers, ridership have boosted the number of bus riders by 42 percent over the past decade but between 2002 and 2006 bus speeds decreased by 4 percent, according to the mayor's office.

Despite the dismal statistics, any effort to boost the quality and popularity of mass transit in New York City must include buses. Improving bus service remains far easier, faster and more cost efficient to than improving the subway system.

"Unlike subway lines, when talking about buses these are not items that need huge multimillion dollar capital output," said New York City Councilmember John Liu, chairman of the Transportation Committee. "We're talking months, not years or decades. It is common sense."

The Road to BRT

"BRT tries to combine the speed and reliability of rail services with the flexibility and cost effectiveness of bus services," said Russianoff. In true BRT, buses travel in a straight, traffic-free path, like subways and railroads, meaning that bus lanes must be specially dedicated. The methods for accomplishing this - and even the definition of "dedicated lane" -- vary from city to city and country to country. The lanes can entail painting the "bus only" lanes a bright, distinctive color, physically separating the bus lanes from other traffic or even moving the bus lanes to the middle of the road, to avoid problems with turning cars.

U.S. cities and cities around the world are successfully using an array of these techniques, to reduce traffic and wait times, increase bus speeds, rider capacity and rider satisfaction while at the same time improving the environmental and reducing the number of car accidents.

In trying to speed its own buses New York can look far to the south. During the mid-1990s, BogotĂˇ, Colombia, has a 21st century BRT that has won accolades from around the world. But this was not always the case. A World Bank report, "Colombia: Overcoming Traffic Gridlock in BogotĂˇ" concluded, " BogotĂˇ's rapid growth resulted in complicated commuting patterns, severe congestion and a deteriorating transportation network. The traditional bus system was chaotic, with too many buses, poor conditions, and no organized stops."

In 2001, the city began building a BRT system, the TransMilenio. It created new bus stations that look like above-ground subway stops and work much like railroad stations. Wide bus lanes run down in the middle of the street, physically cordoned off from other traffic. The buses are elongated and have multiple doors that are flush to the curb for easier boarding. Electronic, real-time signs display the bus schedule; and fares are collected before boarding. TransMilenio, which was completed in about three years, has significantly decreased traffic, improved air quality and reduced road accidents. It has proved so successful that it has served as a model for other large cities around the world, including Los Angeles, London, and Paris. 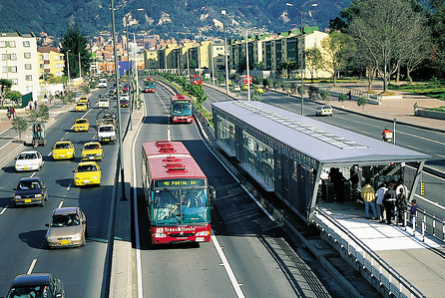 New York Tries to Catch Up

New York has lagged behind many cities, including BogotĂˇ, London and Paris, but it has launched some pilot programs to speed its buses. Last summer, the Department of Transportation painted existing bus lanes bright red in areas of Manhattan and the Bronx. Russianoff believes this will have a positive impact.

"While we do have lanes that are supposed to be 'bus-only,' they are not respected or enforced," he said, "this will remind people these lanes have a special purpose."

Democratic New York State Senator, Liz Krueger wants cameras placed on the outside of the buses. "We're never going to have a transit cop on every corner, nor would we want one," she said. "But mounting cameras on buses and streets would make it easy to track down violators who drive or park in the bus lanes, much as they do now at red lights and tunnels."

Paul Steely White, executive director of Transportation Alternatives, a non-profit organization that promotes travel by means other than cars, wants a more ambitious dedicated lane system mirroring BogotĂˇ's. He thinks bus riders are entitled to it.

"Since there are more bus riders then car riders and one bus can carry more than 10 times the number of passengers as a car. Why shouldn't they be a priority for street space?" he asked.

Not everyone agrees with White, however. This spring, "bus bulbs" were introduced on lower Broadway, at Spring Street and Walker Street. Taking the name from their London counterparts, the bulbs call for extending sidewalks about 10 feet into the street. This lets buses load passengers without having to pull over to the curb.

"The reason bus bulbs work is because the bus can maintain a straight trajectory while it's completing its route," White said. In New York for buses to waste time pulling into bus stops, especially when several buses arrive at once.

Like dedicated bus lines, bulbs take space from other vehicles in order to speed up bus transport. Some residents and shop owners say this only makes existing congestion worse.

"I'm not sure what the goal is," said Albert Capsouto, owner of Capsouto Freres restaurant in Tribeca. "I guess if they're trying to make driving down here completely intolerable, then I'd call it a success."

That was exactly the idea Paris' mayor had in 2001, when he vowed to reduce traffic and improve air quality in the auto-centric city. "What Paris has done right is to make it awful to get around by car and awfully easy to get around by public transportation," the Times reported last summer.

Despite the cynics, more bus bulbs are currently under construction on Broadway.

Buses can spend 20 percent of their time stuck at red lights or in traffic, and another 30 percent loading passengers. "Waiting 15 minutes for a bus to come, or watching a bus pull away and not knowing when the next one will come is the biggest frustration for many riders," said White. It seems either there are no buses at all, or three buses show up in a bunch, causing delays as each bus loads and unloads passengers. Either way, you wait.

Bus Priority Signaling, now being tested in Staten Island, allows better coordination between buses and traffic lights and so could help address some of the delays. If a bus is running late, a green light can be extended until the bus makes it through the intersection, so the bus can stay on schedule.

In addition, New York City Transit has begun testing Global Positioning Systems on buses and adding real-time electronic signs at bus stops that show when the next bus really will arrive. The technology is being tried out at along the city's busiest bus route, running on First and Second Avenues.

"The benefits are twofold," said Krueger, whose district includes the bus stops. "It's very valuable for people at the bus stops to have information about when the next bus is pulling up." More importantly, she said, "it provides a coherent and logical pattern of bus traffic, with one central office sending buses where they are needed at a particular time or given a particular circumstance." This provides valuable flexibility in the event of is gridlock, bus bunching, or a burst steam pipe. "For New York City, GPS is huge," Krueger said.

Krueger, White and Russianoff would all like to see changes in the current fare collection method. On-board MetroCard fare collection is time consuming and cumbersome. Most cities collect bus fares prior to boarding to reduce wait time.

Modifications to the buses themselves - creating longer buses to accommodate more riders, additional doors for entering and exiting, and lower floors - would make it easier for passenger, particularly the elderly and disabled, to board and so cut the amount of time buses spend at bus stops.

A Time for Testing

A spokesperson for the transportation department said it is studying the effectiveness of the current pilot programs, and hope to have a report early this year. Officials are exploring other alternatives, as well. The city plans to have five BRT routes, one in each borough, by 2009.

Whatever form New York City's BRT will ultimately take is still unknown. But, clearly, something has to be done. The more attractive we make the buses as a choice of transportation, and discourage other vehicles, the more likely we are to alleviate the congestion that makes New Yorker's wonder whether they should walk or have time to take the bus.