City Council Speaker Christine Quinn endorsed the creation of a citywide ferry service and an expansion of a small business insurance program in her State of the City address last week. Now advocates and stakeholders are weighing in, and - for the most part - appear to be praising the proposals. 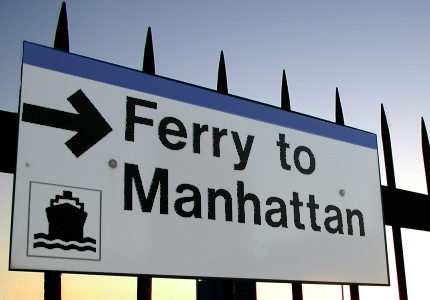 Last week, City Council Speaker Christine Quinn announced her support for a five-borough, year-round ferry system that Mayor Bloomberg and the city Department of Transportation are developing. Such a proposal may seem like a pipe dream to many New Yorkers, who have seen ferry service remain fairly stagnant, either from a shortage of funding or an apparent lack of demand.

But the next time you are heading between waterfront neighborhoods like Astoria, Queens and Red Hook, Brooklyn, just imagine how much nicer the trip could be on a ferry. Rather than fuming at the scarcity of G trains, envision yourself on the ferry’s top deck as you are whisked down the East River and the Manhattan skyline floats by.

A comprehensive ferry system would not only give us a better view, it would turn waterway commuting into a viable and appealing form of public transportation. If done right, a ferry system could be affordable, environmentally conscious and ease the mounting pressure on our rickety transit system.

Transit for a Coastal City

The Big Apple has had a long and complicated relationship with ferries. Gone are the days when steamers plied the waters between Manhattan and Rockaway several times a day with more than 3,000 passengers aboard. With notable exceptions like the Staten Island Ferry, waterfront commuting has gradually gone the way of the dodo. That’s because service is infrequent, fares tend to be relatively high and political support has been soft. Because of their high capacity, subways get most of the attention these days â€“ New York City Transit just recorded its highest annual subway ridership in more than a half-century, with 1.56 billion rides in 2007.

But while the subway network hasn’t expanded in decades, the Big Apple certainly has. Neighborhoods that were once home only to industry are now coveted addresses â€“ the only problem being that there is no subway to serve the new residents. And as anyone who has been on the subway recently knows, the trains are crowded. Congestion pricing is a great start, since it will help us pay for new buses and trains and help clean the air. But congestion pricing alone won’t solve all our transit woes, so we must explore complementary options.

Ferries have a number of advantages over other modes of mass transit. New York City is surrounded by water, and our waterways and waterfronts are, in many cases, untapped resources. Because they rely on the water to move passengers, ferries require very little infrastructure to set up compared with multi-billion dollar subway tunnels. Ferries are also flexible enough to keep up with changing population trends and would help commuters leapfrog all those local subway stops if they are going between boroughs outside Manhattan. There’s also a local economic benefit, as shops, restaurants and services would sprout near ferry terminals.

The first step should be to implement service where the need is greatest. That means in far-flung areas that have been clamoring for ferries for years. It seems barely a month goes by in Howard Beach or Broad Channel when the topic isn’t brought up at civic association meetings. Even as you are reading this, the Sunset-Ridge Waterfront Alliance is collecting signatures online for a petition to reinstate service at the 69th St. Veteran's Memorial Pier in Bay Ridge.

There is a compelling economic argument in favor of ferry service to these communities. Far Rockaway, for example, is one of the poorest areas in New York City, and its distance from the central business district of Manhattan has clearly contributed to its economic isolation -- the average commute time to Manhattan is well over one hour. The Economic Development Corporation is now reviewing bids from private ferry operators to start a two-year pilot program to lower Manhattan. The timetable isn’t clear yet, but, at a minimum, service would be provided Monday through Friday during peak rush hours.

Ferries will in all likelihood require some level of government support â€“ as our buses, subways and commuter trains all do. The price of a ticket must also be fair. In addition, a viable ferry system must include sensible connections to make the door-to-door commute a desirable one.

In too many instances, getting to and from the ferry itself is not a pleasant experience. For example, a number of large employers are located near the 34th Street dock in Manhattan, but getting to them from the water is a hassle, requiring commuters to cross the FDR Drive and another lane of cars. To reach the Hunters Point ferry terminal in Long Island City, pedestrians must use haphazard walkways and pass through an active parking lot. For commuters coming off the subways or buses in Long Island City, the shortest walking distance to the dock is 10 blocks.

We must also make sure the ferry system is environmentally sound. Energy-efficient, clean fuel vessels are essential to reducing air pollution and greenhouse gas emissions. Fortunately, clean-fuel watercraft is off in the future; solar-powered ferries, for example, already are in place in several cities around the world. If the new ferries are owned or operated by the city, they would also be required to use ultra low-sulfur fuel under legislation the City Council passed last week.

With New York City expected to grow to 9 million residents by the year 2030, ferries will also advance the discussion about how to create more transit-oriented development. Neighborhoods like Red Hook and Williamsburg are growing at a rapid clip yet have limited access to the subways. If we pair future communities with ferry service, we can ensure that our waterfront areas are models of 21st century design, urban planning and sustainability.

Marcia Bystryn is the executive director of the New York League of Conservation Voters. Â