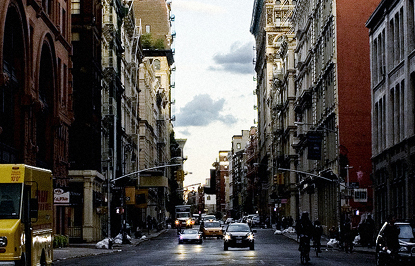 "If they want to come here with their engineers and bulldozers, we'll be at the barricades with balaclavas," said Sean Sweeny, director of the SoHo Alliance. For Sweeney and his supporters, the Department of Transportation's plan to close Prince Street in between Lafayette Street and West Broadway to automobile traffic from 11 a.m. to 6 p.m. for 14 consecutive summer Sundays constitutes an assault on their neighborhood.

Last month, when the department presented the plan to Manhattan Community Board 2's Traffic and Transportation Committee, some people let the agency know as much. "The whole room erupted in boos. It turned riotous," Sweeney said. "I've been on the Community Board for 18 years and it was one of the most cacophonous, riotous, calamitous meetings I've ever been part of. SoHo has been ruined in the last 10 years with commercialism. This would have been the nail in the coffin. The meeting was our Little Big Horn, our last stand. We're not becoming a mall."

But other SoHo residents, like Ian Dutton and the rest of Community Board 2's Traffic and Transportation Committee disagree. "If you think that closing Prince Street on a couple of Sundays will turn it into a mall, you haven't walked in SoHo in 10 years," said Dutton. "What you have now is a very uncomfortable pedestrian experience for everyone ( the people who live here and the tourists) so why not see what can be done to make it better. There is no point in cutting off our nose to spite our face."

And so the battle lines were drawn.

Despite the almost immediate acerbic reactions to the plan (the Streetsblog.org post that broke the story received 75 comments , 10 of which were, to put it mildly, vehemently opposed). The Department of Transportation did not propose a temporary closure on Prince Street simply to flex its muscles. The idea probably had root in London's highly successful temporary street closures, called "Very Important Pedestrian days," on Regent and Oxford streets, two of the West End's premiere shopping corridors. The work of world renowned urban planner Jan Gehl, who conducted pedestrian counts and street life surveys for the city along Prince Street in 2007 may have also encouraged the proposal, along with a 2006 Transportation Alternatives's study conducted by Bruce Schaller, now a deputy commissioner at the transportation department.

All of these efforts point to a way of creating districts where pedestrians greatly outnumber vehicles. In some locations, the reasoning goes, a street has more value as a place for pedestrians than solely as a means of automobile transportation. This kind of thinking no doubt guided the transportation department, along with a desire to create a more pedestrian friendly city, an explicit aim of both Mayor Michael Bloomberg's PlaNYC2030 and Transportation Commissioner Janette Sadik-Khan

Of course, temporary street closures are nothing new. New York City has a long history of them, most far less contentious than the recent Prince Street hullabaloo. In 1970, Mayor John Lindsay decreed that portions of Fifth Avenue and 14th Street be closed to cars in honor of Earth Day. The plan was so popular that Fifth Avenue was made car-free four times that July. A Department of Commerce and Industry survey concluded that 77 percent of the visitors stopped to shop on car-free days. "Suddenly the avenue was full of baby carriages, bicyclists, street musicians, smiling couples, all reveling in the car-free quiet and safety of what had become wall to wall sidewalk," Time magazine reported later that summer.

For five years in the early 1990s then-Bronx Borough president Fernando Ferrer closed the Grand Concourse from 161st Street to 198th Street every Sunday from July to November. Mayor Rudolph Giuliani put an end to that, but in 2005 Bronx Borough President Adolfo Carrion Jr. brought Car-Free Sundays back to the Grand Concourse where they remain a summer attraction.

Even small-scale temporary street closures, like the one on Sundays on the Lower East Side's Orchard Street, which has been happening since the mid-1960s, have proved popular over time and largely without a deleterious impact on area traffic. "Disappearing Traffic? The Story So Far," a paper by Sally Cairns and others, examined over 70 road closures and surveyed more than 200 transportation professionals on the subject. It found that "predictions of traffic problems are often unnecessarily alarmist, and that, given appropriate local circumstances, significant reductions in overall traffic levels can occur."

Still, when the idea of closing a street, even temporarily, is first proposed, many local businesses and residents object. "Communities tend to be resistant to any city-sponsored street closing. They claim that it's people in cars who are shoppers," said "Gridlock" Sam Schwartz, president and CEO of Sam Schwartz PLLC and a former first deputy commissioner at the city Department of Transportation. "It's kind of like a Yogi Berra-ism, trying to convince people that 'nobody goes there anymore because it's too crowded."

Few would argue that Prince Street isn't already crowded. There are narrow sidewalks, scores of vendors, cars, bikes and subway entrances between Lafayette Street and West Broadway. According to the transportation department's "Prince Street Pedestrian Project" presentation, about 4,500 people per hour walk on Prince Street's sidewalks on Saturday and Sundays between 10 a.m. and 6 p.m., while 200 cars per hour use the street during the same time period.

Those in favor of the plan see it as a sensible and proportionate allocation of street space, a precious commodity in downtown Manhattan. They emphasize that a trial closure one day a week will determine whether creating more room for people will make the street safer, the vending less intrusive and easier to regulate, and the neighborhood a more pleasant place to live, work and shop. They point to Schaller's study of Prince Street, which showed only 8 percent of people surveyed arrive there in a private car and 80 percent perceive the street as being overcrowded.

The Schaller Consulting study also found that "by a ratio of five-to-one, expanding pedestrian space would attract people to come to Prince Street more often, even if that meant taking away space to park. Results are almost identical for visitors and those who work or live in the area."

Many of the SoHo residents who oppose the Prince Street pilot program object for precisely that reason. They do not want more were people on their neighborhood streets. Many point to what Sweeney describes as the "garbage, traffic congestion and crowds of strolling tourists who think they own the street and stare at the residents in their windows like they are curiosities" brought annually by the Feast of San Gennaro, which runs for 11 days on neighboring Mulberry Street. "We don't like tourists," Sweeney said.

For its part, the transportation department has insisted that the temporary closure will not turn Prince Street into a permanent street fair. Representatives showed a slide at the Community Board meeting emphasizing "no stalls, no food kiosks, games or rides," and promised to address concerns about the street vendors by increasing enforcement. Many at the meeting, though, remained skeptical.

Ethan Kent, a vice president at the Project for Public Spaces, a non-profit group that works with cities all over the world to create engaging streets and public spaces that serve communities, said, "If I thought that temporary closures meant a street fair every Sunday, I wouldn't want it either, but that's just not the case. There are ways to make streets work for everyone, but you have to plan and manage. The best way to prevent a neighborhood from changing for the worse is planning for the best."

Kent, who has consulted on pedestrian projects from Hong Kong to Poughkeepsie, emphasized the importance of involving all the stakeholders as early as possible in any planning project. "Maybe if the DOT had gotten some businesses on board and partnered them with the supportive residents and then asked, 'what can make this street work better for you?' there would have been a different outcome. I'm sure all the naysayers weren't in favor of speeding cars and honking horns and exhaust fumes, but were afraid of a plan they had no part in," he said in response to the controversy in SoHo

"Planning" and "community involvement" have become buzzwords in the wake of all that has happened in SoHo. On both sides of the debate, people point to the need for community involvement in the planning of any temporary street closure. Shirley Secunda, a retired urban planner and chair of Community Board 2's Traffic and Transportation Committee, who supports the street closing plan said, of the administration "they came before us with a fully developed program ( before people had a chance to give input and even if it's a good plan ( that's a limitation right there. If they gave us more time we could have worked with them to make sure it was as good as it could be for everyone."

Sweeney, more colorfully concurred saying, "The process was so skewed and plutocratic and autocratic. The DOT tried to bulldoze SoHo."

And so despite their differences, the two camps of SoHo residents fighting over 14 summer Sundays on Prince Street agreed on the need for an open process. Community Board 2, at the behest of many area residents, eventually passed a resolution declining the transportation department's proposal that reflects as much. It reads: "CB2 also appreciates DOT's willingness to monitor and modify this test project based on community criteria and input and to sunset it if not affirmatively reviewed, but regrets the absence in this case of a true community-based process in which the neighborhood has been consulted from the start about its problems, concerns and improvement ideas."

For now the future of the Prince Street plan is murky. Now that the Communty Board has come out against it, the transportation department seems disinclined to go ahead with it in its current form. But the idea of street closings remains very much alive. Some people in SoHo would still like to see pedestrian imporvements in the area, and the department, without specifying any locations, confirmed that it is looking at similar proposals in different neighborhoods around the city.

Its statement about Prince Street implies that the department has learned a bit from what happened: "We have listened to the concerns voiced by SoHo residents and will find ways to address our shared concerns about traffic, street vendors, and congestion," said department spokesman Seth Solomonow. For their sake, and for the future of temporary street closures, that seems like a sensible course of action.

Graham Beck is the managing editor of StreetBeat, the biweekly newsletter of Transportation Alternatives and a writer. He lives in Brooklyn.Â