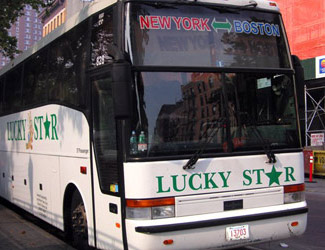 On a recent Wednesday evening, Erin Brown waited for the Fung Wah bus to Boston with a dozen or so other people on a crowded Canal Street sidewalk. "It's such a crush - the people, the vendors, the cars, narrow sidewalks, narrow streets. I don't know why they leave from here, but the price is right," she said.

Brown is not alone in her sentiment. It often feels as though every inch of Chinatown is jam-packed. Cars clogs street from the Manhattan Bridge to the Holland Tunnel. Sidewalks overflow with tourists, workers and neighborhood residents. Stalls spill out from shops, and lately it seems that every few blocks there is a line of 20 or so people queuing up for an interstate bus.

The buses are nothing new. Since 1998, companies like Fung Wah, using spaces reserved for tour buses or agreed upon spots in the neighborhood, have run curbside operations, picking up and dropping off passengers. The recent surge in travel costs, though, has made more outfits see the benefits of such a low-overhead way of doing business. This means more buses jamming city streets and curbsides and more bus queues on already crowded sidewalks.

It has reached the point, according to City Councilmember Alan Gerson, where there now are more interstate bus pick-ups and drop-offs in Chinatown each day than there are at the Port Authority. Although the competition has driven down prices for travelers, it has created some difficult situations for neighborhood residents, passing pedestrians and local businesses.

The trip from New York to Boston on Amtrak is $89. By car, at $4 for a gallon of gas, the 220-mile drive costs somewhere about $30, without tolls. The Fung Wah or Lucky Star bus leaving from Canal Street or Chrystie Street respectively is $15, and their upscale neighbor, the Bolt Bus, which departs from the sidewalk outside of Penn Station, is about $20 with a reserved seat and wireless internet. Given the economics, it's no surprise that the bus business is booming.

Chinatown already has one of the highest childhood asthma rates in the city - one study estimates that one in five households has at least one person suffering from the condition. Some neighbors believe the increase in buses and the traffic they generate waiting and circling can only exacerbate the situation.

What's more, the multiple drop-off and pick-up points used by the various bus operators complicate the neighborhood's notoriously tricky traffic patterns. In a Chelsea Now article, police officers from the nearby Fifth Precinct report that it is difficult to maintain a steady flow of both pedestrian and automobile traffic because of the buses. The buses' multiple staging areas also make it difficult to regulate trash and parking.

"It's a part of the city where there is already an intense utilization of the curbside," said Wiley Norvell, a spokesman for Transportation Alternatives. "When things go wrong at the curb, nothing else on the street functions well. There is a definite need to consolidate and take stock of our curbside regulations: where buses are aloud to park and idle, and where passengers are allowed to queue."

And the City Says

In 2006, Michael Lau, the commanding officer of the Fifth Precinct, told the City Council Transportation Committee that the crowding of discount buses in Chinatown brings dangerously congested streets, the possibility of accidents and even violence as bus operators compete for parking spots and passengers. He claimed that 30 different bus companies dispatch more than 100 buses each day from Chinatown's curbsides

In response, city officials presented a plan to the local Community Board, Manhattan Board 3 that would have consolidated the interstate bus stops in a two-block area near where Pike Street meets the F.D.R. Drive. Residents of the nearby housing projects understandably were none too pleased and urged the board to vote down the proposal. It did 23 to 7.

For sometime now, the Department of Transportation has been working on a study of the bus traffic in Chinatown. Although a department spokesperson was unavailable for comment, judging by its efforts with Community Board 3, the department doe seem to be paying attention and listening to stakeholders.

Still, with gas prices high, air fare exorbitant and the expense of Amtrak tickets, the curbside bus boom in Chinatown and elsewhere around the city seems likely to continue, pressing officials and bus operators to come up with ways to keep fares low and streets and sidewalks clear.