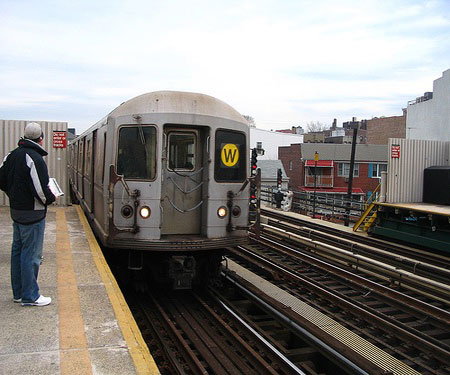 Are the drastic service cuts adopted by the Metropolitan Transportation Authority board yesterday a bow to reality or simply a tool to goose the state legislature into giving it more money?

Earlier this month the MTA revealed that it faced a budget gap of around $400 million. The gap arose from a combination of factors, according to the agency. The state legislature reduced MTA funding by $143 million in its end-of-the-year deficit reduction plan, a payroll tax enacted by the legislature has brought in around $100 million less than expected and a State Supreme Court judge ruled that the MTA must make good on an 11.5 percent pay hike to transit workers over the next few years. All this put the Metropolitan Transportation Authority in a place no one wanted it to be again -- facing a major funding shortfall and promising drastic cuts if something isn't done.

On Wednesday morning, the MTA board voted unanimously to accept a budget that will eliminate two dozen bus routes and the W and Z subway lines, shorten the G and M lines, cut door-to-door paratransit service, and eliminate free rides for school students. Over 700 workers are expected to be laid off, and MTA administration will take a 10 percent pay cut. The MTA board will have to hold a round of public hearings and another vote before the cuts go into effect next year. A number of board members who voted for the plan voiced their hope that the cuts can be avoided.

Service cuts won't begin until July. Students would have to start paying half fare in the fall and finally full price in 2011.

Now, as advocates and straphangers and parents rage against the cuts, a game that played out last spring will start all over again -- with the legislature blaming the MTA for being alarmist and for not being forthright about its financing and the MTA accusing the state of being unwilling to come up with a sustainable funding mechanism for the authority.

Again straphangers will be left in the lurch, wondering if the state will act fast enough to make sure they aren't stuck holding the bill.

"They're the ones that put a deal together and said, 'You're fine for two years," board member Jeff Kay has said, referring to the legislature. "It's their deal that fell apart."

Manhattan Borough President Scott Stringer told the board New Yorkers are tired of the MTA's constant cash crises. Their "budget dance is quickly becoming known as the hustle," Stringer said.

Austin Shafran, spokesman for the Senate majority, took a more conciliatory approach. "We don't blame the MTA for the fiscal crisis," he said. "They didn't cause the financial problems, but more can be done to avoid these cuts."

Shafran attributed the $100 million shortfall in payroll tax collections to a lack of compliance, something typically seen with new tax collections. Despite that, he said, "The MTA has to tighten their belt and do more with less, like most New Yorkers."

"I am pretty ticked we are right back where we started," said Gene Russianoff of New York Public Interest Research Group's Straphanger's Campaign. The scenario played out for months last year as the MTA and advocates pressed the legislature to pass a bailout plan. Transportation activists pushed for a plan that would put tolls on bridges into the city -- making drivers part of the plan, as they put it. But recalcitrant senators balked at proposed tolls, mocked the MTA's bookkeeping.

Eventually, under mounting public pressure, the legislature passed a plan that did not include tolls on bridges, but also avoided significant service cuts and raised fares less than originally proposed. It did include the payroll tax. The package was largely seen as a stopgap.

Now, seven months later, with the state, too, facing financial crisis, there was no rush to plug the MTA's funding gap.

Some say the MTA's proposed cuts, specifically eliminating free rides for students, are designed to shock politicians into action- -- perhaps even to get them to consider congestion pricing next year.

"Last spring, we worked very hard with a number of other organizations to create a mechanism that would get the MTA through not just the thin times but the long haul," said Wiley Norvell of Transportation Alternatives. "But instead what we got puts the burden on straphangers and businesses. Drivers were left out of it. Now we have severe cuts laid on straphangers. And advocates are forced to make a Sophie's choice between funding capital projects or just keeping what we have running."

Norvell said he is heartened by recent comments from Mayor Michael Bloomberg and Gov. David Paterson to the effect that implementing congestion pricing or bridge tolls would have headed off this financial mess. "Hopefully, what is on the table sets things back in motion to put the fourth leg back in place- -- congestion pricing," said Norvell.

But skepticism about charging people to drive into Manhattan persists. Sen. Kevin Parker said he would need more details. "Congestion pricing is not a silver bullet," he said. "The last plan that was before us would have cost the state more money in the first two years before it actually made money because of spending on infrastructure. So it would not solve an immediate cash crisis."

While the route cuts are severe, the idea of charging students, many of whom now get three free rides a day, to go to school has sparked the most outrage. "I have two daughters and I can't believe they would get rid of rides for students," said Russianoff. He estimates it would cost him around $900 to provide his daughters with Metrocards for most of the year.

Council Speaker Christine Quinn and Councilmember James Vacca proposed that the MTA use $90 million in unspent stimulus funds and $50 million in operating funds that are currently going to supplement the MTA's capital budget to avoid major cuts. But some advocates note that doing this would take away the urgency and make it harder for the MTA to force the legislature to consider congestion pricing -- or at least increasing its funding.

Paterson and Senate Democrats have responded to massive parent and student outcry and say they will act quickly in next year's budget to restore funding to the program.

In most other cities, the school system or city or state government -- not the transportation authority -- funds student ride programs, according to Russianoff. Here, he said, city funding for the program has "flatlined" while costs have increased, and "the state's support is down to an astonishing $6 million.

While Bloomberg said, "We are not going to stand for" elimination of the free student rides, he has apparently not offered to increase the city subsidy.

In general, the relationship between the legislature and the MTA remains tepid at best. "The MTA's credibility with the legislature is very low," said Russianoff. "They were told the bailout was enough. Then the MTA turned on a dime and all of a sudden, out of nowhere, they have this gap, and the legislature was shocked by the turn of events."

The rift between the MTA and the legislature is probably what stands in the way of instituting a steady source of MTA funding -- a source such as congestion pricing. A lot of legislators simply think the agency cannot be trusted. They see this budget crisis as "manufactured" and "alarmist."

He is supporting legislation that would actually phase out the MTA's payroll tax by the end of next year but conceded his bill has as much chance of moving as "you and I do of flying without an airplane." And so, Miller said, he expects "the rest of the state will just be used to make New York City happy until the three men in a room aren't all Democrats from New York City."

As for the service cuts, Miller did not express much concern. "So now New York City has to face service cuts. Boo hoo," he said.

Senate Democrat Brian Foley has proposed a bill that would reduce the payroll tax in Suffolk and Nassau counties.

The two members' action undercut the threadbare relationship between the MTA and suburban legislators.

Meanwhile, Democratic senators and Assembly members who represent the outer boroughs and opposed tolling the bridges last spring have remained fairly silent as the MTA's fiscal crisis has played out. A number did not return calls for this article.

Sen. Martin Dilan, head of the Senate Transportation Committee, said he was shocked by the MTA's shortfall announcement, specifically about the lower than expected returns on the payroll tax. He wrote Walder to share his displeasure.

"It is an affront to our burgeoning partnership, often discussed in previous months, to exclude us from this critical information," Dilan wrote, adding: "Additionally, it is difficult to think that our exclusion was simply a matter of being overlooked. One can only conclude that by going to the press first, your organization was in fact using the media to once again stir the bees' nest, rallying fears of insufficient funding and potential fare increases and service cuts."

Senate Finance Committee Chair Carl Kruger had also issued a statement blaming on the MTA for its fiscal projections. "Our ability to budget is only as good as our ability to forecast," he said.

He went on to say that he expected the payroll tax to "kick in" in the coming months. "It is my hope," he wrote, "that the MTA will not create an atmosphere of confusion or a needless sense of unrest over what appears to be self-adjusting bookkeeping issues. We all recognize that shortfalls are real and that expenditures are exceeding revenues. That is why we're addressing the situation in this manner."

Calling the MTA "the Grinch that stole education," Parker condemned the authority for suddenly announcing a $400 million deficit and then voting on a plan before anyone had time to take action. "I have no idea what's going on with the MTA's books," he said. "We still haven't received the forensic audit we asked for earlier this year."

Despite such suspicions of the MTA, Norvell hopes that the current brouhaha over drastic service cuts will lead to real discussion about congestion pricing. He said he thinks the public won't let legislators off the hook.

"This spring, something unique happened," said Norvell. The public and the media didn't allow legislators to use the MTA as a wooden shield. That didn't fly last spring and legislators were forced to come up with a decent compromise. Beating up on the MTA for months doesn't create new revenues."