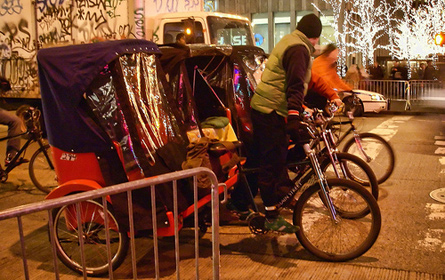 Times are tough in New York’s pedicab industry. Drivers and owners of the bicycle taxis usually count on holiday season business to get them through the slow months of winter, but this year the recession and dismally wet weather weakened December business.

To further complicate the picture, new regulations governing the pedicab industry went into effect on Nov. 30, and it remains unclear how deeply these changes have affected business. The rules require that all pedicabs be inspected, insured, registered, and equipped with seatbelts and tail lights and that all pedicab drivers be licensed by the Department of Consumer Affairs.

Considering this is the low season for pedicabs, no one has much hard information on the impact of the new rules. A consensus appears to be merging, however, that things have changed.

David Pollack, executive director of the Committee for Taxi Safety and one of the strongest advocates for regulation, seems pleased with the results. "Pedicabs had been a big problem for the longest time," he said. "Guys running red lights or going the wrong way down one way streets used to be a constant issue." Pollack reported that complaints from taxi drivers abut the bicycle cabs had decreased.

Complaints from pedestrians are down too, according to the office of City Councilmember Daniel Garodnick, who represents several of the neighborhoods most trafficked by pedicabs. Persistent nuisances like pedicabs on sidewalks or in no parking zones, and aggressive drivers harassing passers-by for a fare seem to have dropped off, according to the council member’s office.

Not all are satisfied however. The City Room blog reported in December that the 2009 holiday season was one of the worst on record for the pedicab businesses. "The economic crisis, a series of wet weekends and new regulations requiring licenses for pedicab drivers have created a perfect storm of misery in New York’s pedicab industry," it said.

While the weather and the economy have had an effect, some in the industry think the regulations have made the situation worse -- at least for now. For one thing, the number of people who have applied for pedicab licenses is far lower than the number of pedicabs in the city. According to the city's Department of Consumer Affairs, there are currently 943 registered pedicabs and 490 licensed drivers. For pedicab owners, many of whom own small fleets of the vehicles, this means massive amounts of lost revenue from rentals as their cabs sit idle.

"We’ve seen an 80 percent drop in revenue from December of last year," said Greg Zukowski, owner of Revolution Rickshaws, a company that rents out pedicabs to drivers.

Whether or not some businesses will be able to last that long, though, is uncertain. January to March is the low season for pedicab rentals, and owners depend on a fat holiday to make it through that dry period. This year there were not enough pedicab drivers to fill the seats, and owners have been left struggling to find ways to get by.

The Drive to Regulate

When pedicabs began traveling city streets, they were subject to few, if any, regulations. By 2006, though, discussions had begun and the City Council held hearings on what, if any regulations, should govern the estimated 350 pedicabs then operating in the city. In 2007, the council passed legislation, which capped the number of pedicabs allowed to 325. It also required drivers to get licenses and have insurance; set safety standards for the cabs; and required pedicab operators to determine how they calculated fares. Mayor Michael Bloomberg, who initially supported the measure, vetoed it, but the council overrodethat veto.

The battle was not over. The pedicab owners sued the city, successfully challenging the system the Department of Consumer Affairs planned to use to award licenses. Last summer, the City Council passed new legislation, which eliminated the cap on the number of pedicabs. Otherwise, much of the original legislation remained, including the driver's license, mandatory safety inspections and required safety features like seatbelts and taillights.

Obtaining a pedicab-driver’s license is relatively simple. The applicant must be a licensed driver, submit a photo ID and fill out several forms including a Child Support Certificate. According to the Department of Consumer Affairs, processing the application averages about five days. However several pedicab drivers did complain of slow turnover, most often because Consumer Affairs sent their license to the wrong address. The cost of the license is $35 a year.

Despite such problems, some drivers praise the new system. "In the past we were discriminated against by customers because the city wasn’t regulating the industry," said Jeff Larson, a pedicab driver for three years. "In general I think the regulations are very positive, especially the safety codes."

Now that they have been recognized by the city, pedicab owners and drivers think they deserve a more pedicab-friendly infrastructure.

"On the ground it's challenging," said Zukowski, who also is the head of the http://www.nycpedicabassociation.org/ Pedicab Owners Association. "City infrastructure hasn't really accounted for pedicabs yet." He pointed to the lack of taxi-stands for pedicabs, rules forbidding pedicabs from riding across any of the city's bridges or in bike lanes, and a continuing dispute with the Department of Parks and Recreation over how and where pedicabs can give tours through Central Park.

Any kind of regulations and improvements to tackle these issues will probably be put on the back burner for now, while those concerned about pedicabs see if the new regulations have made a difference. "Things always get better in the winter," said Wally Rubin, manager of Commmunity Board 5 which represents some of the most heavily trafficked pedicab routes in the city). "So if changes are made in November, as they were this year, the time to test them is spring and summer, not January."