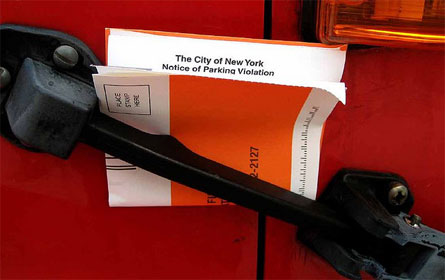 While annoying, each of these serves a greater personal or social purpose. With parking tickets, there are policy considerations and revenue benefits, and the fines serve as an incentive for advancing those policies: keeping parking spots available, allowing street cleaning, helping traffic move.

That does not make anyone want to pay them, though. For many people the main experience they have with courts involves contesting or paying motor vehicle infractions, whether moving or parking. A judge attending a party of non-lawyers can always expect other guests to tell him or her about jury service or the terrible things that happened in traffic court.

With parking tickets, one issue revolves around the ability to plead "not guilty." New Yorkers can fight parking tickets, but until the final decision is rendered, they will be presumed guilty of letting the meter run out, parking on the wrong side of the street on alternative side parking days or having incorrectly interpreted the often confusing signs that mark streets in many of the city's businesses district.

A person can plead not guilty of a parking offense by mail, on the internet or in person. The problem though, is that the New York City Parking Violations Bureau and the Department of Finance require the driver or registered owner to pay the fine within 30 days. Pleading not guilty by mail or on the internet may result in a determination more than 30 days later. Paying the fine upon a finding of guilt then could entail a late penalty for the 30 days the not-guilty plea was under consideration. So someone who does not pay the fine, pleads not guilty and is found guilty must pay not only the original fine but also the penalty for late payment.

In one case, Sanford Young, a lawyer, was ticketed for allegedly parking on Manhattan’s Upper East Side at 6:59 p.m. in a spot where parking was not allowed until 7 p.m. He did fight the case and estimated that he spent $10,000 of his own legal time on it.

A Notice of Parking Violation (the summons) was issued to Young’s vehicle as it sat parked across from 1330 First Ave. The summons charged violation of the weekday prohibition against parking in that area between the hours of 4 p.m. and 7 p.m. On Dec. 9, 2005, Young entered a plea of not guilty through the city's website and requested an online hearing. In the field provided to explain the asserted defense, he made the following statement:

"A New York Minute": The ticket, which says I was parked at 6:59 p.m. in a "No Parking ... 4P-7P" area is absurd and wrong! Knowing full well -- as a life long New Yorker and lawyer -- that it is not legal to park on the avenues until 7:00 p.m., and that some officers write tickets in the last few, I did not park my car until a couple of mins past 7:00. I am certain it was past 7:00 because I was watching my car clock -- which is in the instrument panel. I also know that the clock is accurate because I synchronize it with my cell phone which time is set by Verizon and my watch. Therefore, I respectfully ask that the summons be dismissed. Thank you.

By letter, the Department of Finance's Adjudication Bureau acknowledged receipt of the request for a hearing and offered to reduce the fine from $65 to $43. Young did not accept the offer. An administrative law judge issued a decision and order finding the petitioner -- Young -- guilty, saying, "Respondent is not persuasive that he did not park until after the restriction ended."

The Parking Violations Bureau suggested that the agent's sworn summons must prevail over petitioner's unsworn online statement. The city, though, allows written testimony to be submitted through its website, and that testimony is always unsworn. If the sworn summons of a traffic officer would, as a matter of course, prevail over the electronically submitted testimony, submitting it would then, regardless of the facts of the situation, be an exercise in futility -- an illusory alternative to a paper or in-person response. Young's summons was ultimately dismissed in State Supreme Court.

Another motorist received a "red-light summons" for being in a crosswalk after the yellow light turned red. This is not considered a "moving violation" because the offense was detected by photos taken by hidden cameras. The driver pled not guilty, by mail, contesting the position of her car in the photo. Upon a written finding of guilt, she sent a check for the full penalty, $50. However, the city added another $25 because more than 30 days had elapsed since she received Notice of the Violation.

Boshnack points out that when motorists do appeal, the agency may render the case moot by dismissing the ticket and refunding fines already paid. In that event, the case goes no further -- a good outcome for the driver that may reflect the city’s desire to avoid further litigation or to avoid determinations adverse to the Parking Violations Bureau.

Drivers though should not count on that and think they can skip paying the fine. Paying the penalty is a prerequisite for appealing a Parking Violations Bureau decision. The Rules of the City of New York read, "No appeal shall be permitted unless the fines and penalties assessed by the Hearing Examiner are paid, or the respondent shall have posted a cash or recognized surety company bond in the full amount of the final determination appealed from." In other words, payment is due before a determination is made. That might be called a presumption of guilt.