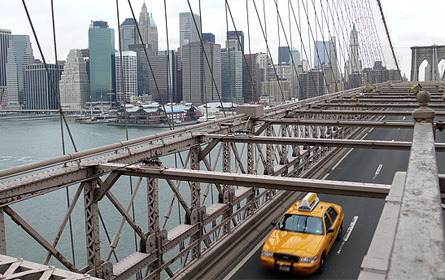 Photo by Julian Hutchings
A proposal by some upstate state senators would allow the City Council to place tolls on the Brooklyn Bridge and other East River crossings.

The Metropolitan Transportation Authority has been conspicuously absent from the Albany debate this year. But as the session winds down slowly, the MTA and its issues are creeping back to the forefront, thanks to a group of upstate and Long Island Republican senators who want to drastically cut back the payroll tax that helps pay for mass transit and commuter rail. At the same time, they would pave the way for tolls on the East River bridges, an idea that has been touted as a solution to both the MTA's chronic fiscal woes and Manhattan's traffic congestion. This time around though, even some supporters of the tolls have their doubts.

In 2009, with the MTA facing a huge budget gap, the state government enacted a tax in the city and counties serviced by the MTA including Putnam, Westchester, Rockland, Orange, Suffolk, Dutchess and Nassau. The tax as it stands raises $1.34 billion annually for the MTA. Although it amounts to only 0.33 cents on every $100 dollars paid by employers, many politicians from these areas have opposed it, saying the MTA provides limited service in their districts and most of the businesses in their counties don't benefit from it.

Sen. John Bonacic, whose district encompasses Delaware County, Sullivan County and parts of Ulster County and Orange County, has introduced a bill that would do away with the payroll tax in all counties except New York City. To make up the revenue he would allow -- but not require -- the New York City Council to set tolls on the East River Bridges: the Brooklyn Bridge, the Manhattan Bridge, the Williamsburg Bridge and the Ed Koch Queensboro Bridge. The charge could be between $2.50 and $5. This idea has been frequently proposed before -- most recently in 2009-- and has always failed.

Bonacic has the support of fellow upstate Republican Sens. Gregory Ball, William Larkin, Stephen Saland and Lee Zeldin. The bill does not have a sponsor in the Assembly as of this writing, although Bonacic has reached out to possible sponsors and notes that a number of Assembly Democrats y voted against the payroll tax in 2009.

Although some transit advocates have supported tolls or charging people to drive into Manhattan in the past, they expressed reservation about Bonacic's plan.

Advocates like New York Public Interest Research Group's Gene Russianoff say there are simply too many variables that could leave the MTA with a gaping financial shortfall. If the council decided not to implement tolls or implemented very low tolls the MTA would end up losing money. "The bill does not set a toll rate," says Russianoff. "It only allows the council to implement them." He added that some studies concluded that a $3 toll, such as one previously recommended by Assembly Speaker Sheldon Silver, "would cost us money."

Neysa Pranger of the Regional Plan Association says that the MTA's finances are not particularly strong especially when it comes to its capital plan. "We need to be looking for new sources of funding not getting rid of them," she said.

Bonacic, however, thinks the tolls would provide more than enough money. He says that the payroll tax in the suburbs is supposed to generate $343 million a year, while the tolls could generate as much as $533 million annually. "I think the revenue stream from tolls would generate about a $200 million surplus. It's a revenue enhancer they can spend as they see fit." Bonacic did not say how much he thought motorists should be tolled.

The debate revives talk of congestion pricing, which many transportation advocates, including Russianoff, favor. Mayor Michael Bloomberg has reportedly been working on a revamped version of congestion pricing called "traffic pricing" as a way to better fund the MTA and perhaps reduce fares. Bloomberg's plan, however, supposedly would not roll back the payroll tax. Bloomberg recently talked about funding mass transit through "pilot technology and pricing based mechanisms," while introducing his environmental plan earlier this month.

The City vs. The Suburbs

For Bonacic the debate comes down to one of usage and services. He says train service in the small part of Orange County that he represents has not improved since the tax was implemented. He describes the situation as, "taxation without transportation."

At the same time, Bonacic says the payroll tax hurts not-for-profits and businesses. "This stunts job creation," he said. He said that the payroll tax raises $18 million per year in Orange County where only 2 percent of resident use MTA services. "The legislature implemented this when everything was controlled by Democrats from New York City. The passion against it has not subsided," he said.

But Russianoff disagrees. "People may say, 'Well, I don't take the train,' but the people who go to the florist may come up on one, the people pushing the shopping carts may have gotten there thanks to MetroNorth or the subway or bus."

Russianoff described the situation as a slippery slope. "If they think it isn’t worth paying for the service then what about the other MTA taxes, like the sales tax? I don’t think it would be fair for subway and bus riders. I think in the end it would cost the MTA funding."

Meanwhile, city legislators say that tolls on the East River bridges would hurt their middle class constituents. Sens. Tony Avella and Toby Ann Staviskyissued a press release slamming the plan. "Tolls are a tax, and middle class families can’t afford to keep paying more while getting less in return. The legislation proposed by Long Island and upstate Senate Republicans to place tolls on the East River bridges will adversely affect commuters, small businesses and working families in outer-borough communities who have very limited access to public transportation," it said.

Bonacic is trying to sell the plan as environmentally friendly. His arguments for the tolls are similar to the ones made for congestion pricing. "Everyone who goes into New York should pay their fair share. It would reduce traffic and be better for the environment if people started using public transportation more."

But the truth is any bill that features bridge tolls faces an uphill battle in Albany, and Bonacic does not yet have bipartisan support on the bill, although the first supporter he wants to bag is a big one. "I need [Gov. Andrew] Cuomo to get behind this, because he has said he doesn't like the payroll tax. But this is just the beginning," the senator said.

During a visit to Poughkeepsie in January Cuomo called the levy on payrolls "a very onerous tax.' He went on to tell reporters, "It's not just in this area; people are complaining about it on Long Island, the entire metropolitan region. ... I understand the need to finance the system. If we can find a better way to do it, I’m open."

The Independent Democratic Conference, made up of Sens. Diane Savino, David Carlucci, David Valesky and Jeff Klein, also has made repealing the payroll tax part of its agenda. Klein, the leader of the breakaway group, listed the payroll tax as one of the biggest mistakes the Democrats made while they were in the majority. However, Savino and Valesky voted for the tax in 2009.

It's not clear if the four would support tolls. The group has said it blames gross mismanagement" for a third of MTA’s current fiscal debt." In its agenda, they say, "Our goal is to conduct a comprehensive forensic audit of the MTA to find areas of waste and corruption and determine the need and the efficacy of the current MTA tax."

Whether or not his bill gains traction, Bonacic expects the next two months will see more legislation that will propose other ways to fund the MTA and do away with the payroll tax on upstate counties. "There are enough upstate legislators who recognize this is simply unfair," he said.

Russianoff also anticipates major debate over how to fund the MTA before the end of the session. As for Bonacic's bill, he said, "We don't support it, but I think it raises an interesting question about what would it take to get the legislature to seriously consider bridge tolls, whether they were connected to payroll tax or not."