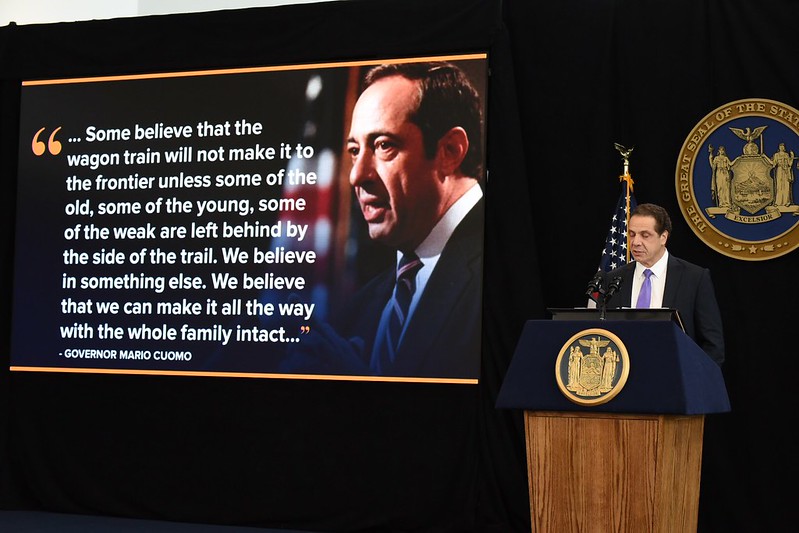 Early in 1984 I visited Governor Mario Cuomo’s office in Albany at his invitation. He wanted to discuss a talk I’d given at the New School about his first year as governor. I found myself going on about the growing dominance of the governor in New York’s legislative process. Governor Cuomo loved to debate. I knew from earlier experience that trouble was ahead when he started a sentence by addressing me as “professor.”

“Don’t you realize, professor,” he said, “that when it comes to making law, they can act without me, but I cannot act without them?” His point was that he could block passage of a law, but that a determined legislature, by a two-thirds vote of those elected to each house, could override his veto.

Fast forward to the 2020 election. It resulted in “veto-proof majorities” – one party with more than two-thirds the seats – in both the Assembly and the Senate. This has not occurred in New York since 1948, and was a first for the Democratic Party in the legislature since the adoption of the state’s current constitution in 1894. It has generated considerable discussion about the prospect of the legislature using the override power to enact a more progressive policy agenda than favored by Mario Cuomo’s son, the current governor, Andrew Cuomo. How realistic is that conjecture?

The Rules and Their Consequences
All state constitutions provide for an executive veto; all also provide for legislative override. In New York, the executive veto power was added to the state Constitution at the 1821 constitutional convention. (Previously the veto resided in a Council of Revision. That Council might be overridden by two-thirds majorities of both houses; this possibility was carried over to apply to the new governor’s veto.)

Compared to provisions in other states, New York’s legislative majorities required to override a governor’s veto are both the most typical and the most demanding. In 36 states the majorities needed in each house to override the governor are the same as in New York. In six – and in unicameral Nebraska – it’s three-fifths. In six it’s a simple majority. Unique to Alaska, two-thirds of the members of both houses meeting jointly are required to override.

Nationally, state legislatures seek to override about one in 20 gubernatorial vetoes. But in New York, override attempts are very rare. The two-thirds vote required in each house is a high bar. Also, the relative strength of the governor’s overall powers discourages taking on the executive. For much of the 20th Century, a constitutionally-based gerrymander usually produced Republican majorities in the Assembly and Senate. Until fairly recently, however, the state’s history of political competitiveness kept one party or the other from overwhelming dominance within each house. Thus, from the governorship of Democrat James T. Hoffman in 1872 until that of Democrat Hugh Carey in 1976 – a period of 104 years – New York governors used the veto freely, but none was overridden.

The History in New York
In the 19th Century all city charters were state laws; they therefore could only be adopted and amended by the state legislature. The legislature in 1872 overrode Governor Hoffman’s veto of a charter amendment concerning the structure and accountability of the proposed elected City of Albany Police Commission favored by the leaders of both major parties.

Over a century later, in 1976, during the second year of the Carey administration, the override arose from political pressures connected with a massive New York City fiscal crisis. In response to draconian New York City budgets the teachers union sought a state legislative mandate that total New York City education spending not fall below the average spent for this purpose in the three previous years. Governor Carey vetoed the bill; he said he did so to assure equity in the distribution of the inevitable pain that the city’s fiscal crisis was producing. The legislature overrode the veto. The courts however, found unconstitutional the substance of the bill and the process by which the veto was undone in the Senate. So this was actually, finally, a failed override attempt.

The six successful overrides since then focused upon financial issues, such as state spending, mandates upon New York City, and local taxation.

Governor Carey was often dismissive of the legislature. Moreover, under Speaker Stanley Fink, the Assembly became more assertive in independently advancing a policy agenda. Also, as austerity eased later in Carey’s second term the legislative houses, restive with gubernatorial dominance of revenue-estimating, each developed an independent capacity to project how much more money there was to spend, and set out to spend it. In 1979 the Assembly overrode Carey’s vetoes of Assembly initiatives, backed by the Senate, to ease the impact on working poor and older New Yorkers of heating price increases arising as a result of the energy crisis. In 1982 many of Carey’s numerous vetoes of legislative budget adds were overridden. Also, in that year the legislature overrode the governor’s veto of a bill passed to circumvent a politically-explosive state high court decision requiring full value assessment of real estate for tax purposes.

In his 12 years in office beginning in 1982, Mario Cuomo himself had not a single veto undone by the legislature. His successor George Pataki, a Republican, was overridden three times. In 1996 he failed in an attempt to block a measure favored by the New York City Police Benevolent Association that the city’s Republican mayor, Rudolph Giuliani, claimed would result in $200 million in additional labor costs. In 2003 the legislature overrode Pataki’s vetoes of several state and New York City tax bills, most importantly the first state increase in the personal income tax rate in over two decades. And in 2006, the Senate and Assembly overrode almost all of Pataki’s vetoes of their budget additions.

Since then, there have been attempts, but no veto overrides passed by both houses of the New York legislature. Democratic Governor David Patterson’s 2010 veto of an ethics reform bill was overridden in the Democratic Assembly, but not in the Republican Senate. In 2018 Governor Andrew Cuomo’s veto of a bill that sought to fund full-day kindergarten in the remaining nine New York school districts that had not instituted it, was overridden unanimously by bipartisan vote in the Republican-run Senate. However, in the Democratic Assembly, where the bill had also initially passed unanimously with bipartisan backing, Speaker Carl Heastie declined to follow suit.

Most significantly, however, overriding the governor in this circumstance of divided partisan control requires majority party legislators in one house to take on a chief executive of their own party, daunting and risky for members who might later be dependent on gubernatorial support or good will for realization of their ambitions. History shows that each override effort in the state has been variously motivated in the specific circumstance by the convergence of a different mix of factors, including for example: a desire to assert the power of the legislative institution; a need to please a valued constituency; and/or a wish to publicly embarrass or sanction the governor, the mayor of New York City, or another political adversary.

Notwithstanding its rarity until now, experience elsewhere suggests that more frequent override politics might well be in store for New York with the arrival of Assembly and Senate veto-proof majorities. In 2021, according to Ballotpedia, “…there were 22 state legislatures where one party held a veto-proof majority in both legislative chambers.” (Unicameral Nebraska also had such a majority in its Senate, though it is formally non-partisan.) Analogous to the coming situation in Albany, most of these legislatures were controlled by the majorities of the governor’s party.

Yet co-partisanship did not preclude veto overrides, most focused on fiscal issues. For example, in Mississippi in 2020 the Republican legislature overrode a partial veto by Republican Governor Trent Reeves of an education appropriation bill linked to teacher pay. And in Oklahoma the Republican legislature overrode Republican Governor Kevin Stitt’s veto of the state budget as excessively draconian. In both of these states overriding the governor’s veto requires a two-thirds majority in each house, just as it does in New York.

A busy 2021 legislative session is in the offing in Albany. In the still early days of a long dark COVID-19 winter, the Senate and Assembly will likely continue meeting remotely. Early on, legislators will have to decide whether to continue the governor’s pandemic-related emergency powers, initially limited to a year. The mix of spending cuts and taxes to address the state and local fiscal crisis will dominate the agenda. Unless delayed by the unavailability of Census data, majority members will be focused upon adopting redistricting plans that assure job security for themselves and further entrench Democratic control of both houses. Democrats will almost surely also try to grow their share of the (shrinking) state Congressional delegation.

Proposed changes to the state constitution, a process in which the governor has no formal role, offer opportunities for legislative assertion without the need to override. Legislators will consider first-passage of a constitutional amendment to ask the people to help them regain some of their greatly diminished fiscal powers. There is also an unfinished ballot-access, election-reform agenda. Having been given a taste of the convenience of no-excuse absentee voting, constituents will expect its continuance. This will require second passage of a constitutional amendment. An amendment will also be needed to reform New York’s party-dominated process for election administration, which again proved very problematic this year.

Newly-elected progressive Democrats see veto-proof majorities as a tool for wresting control of the policy agenda from the governor to institute their social change agenda in such areas as health care, criminal justice reform, and tenants’ rights. They are likely to be disappointed.

As noted, there is a lot to do in the coming session, in a difficult environment. Second, just look at the state’s map of the presidential vote in 2020. Much of the territory outside the big cities is red, including in some New York City suburbs. Democratic legislators elected from these areas are moderate, even conservative. They do not necessarily embrace a full progressive agenda. Moreover, Governor Andrew Cuomo is of their own party, remains very powerful, and intends to seek a fourth term. Also, Cuomo’s status was elevated as he became the alternative Democratic voice to President Donald Trump’s in addressing the pandemic. He retains a national platform that has a multiplier effect: it is a political and governmental resource within the state. And in recent months, as the state’s Democratic Party has re-centered to the left, the governor has found a way to visibly move with it, for example on the question of police reform.

But then there is the budget.

New York is looking at a $14.9 billion shortfall for fiscal year 2021 and a total revenue gap of $63 billion through fiscal year 2024. Federal aid to states and localities has still not been appropriated. The governor has publicly said that the state will need to raise new taxes. But almost certainly he will seek to fill the gap with far more cuts than new revenue, while most Democratic legislators will prefer the opposite. Moreover, taxing the rich more heavily, advocated by progressive Democrats, might be preferable to their less liberal colleagues than higher property taxes or major layoffs in school districts and municipalities. So this is where the Democratic legislative intra-party unity required for veto override politics may emerge. And, as Governor Andrew Cuomo’s father taught me, “they” might very well make law without him.

Note: this column has been updated with two additional veto overrides not included when the piece first published.