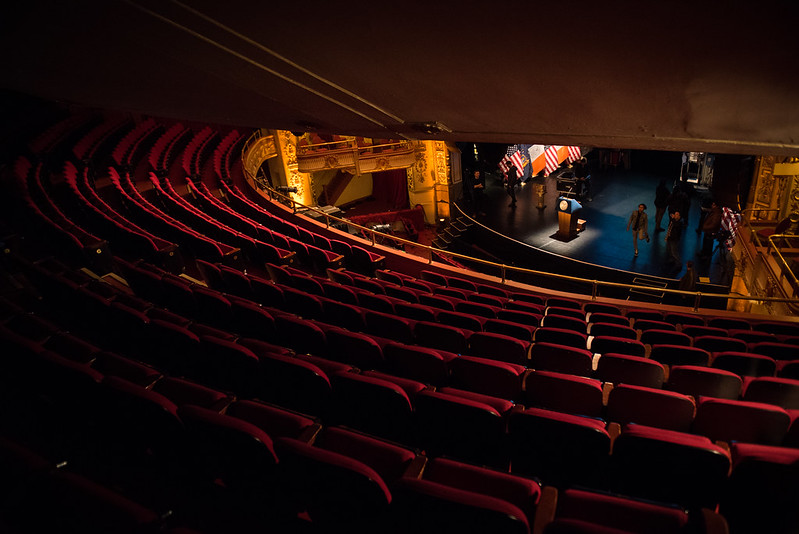 Theaters shuttered—some will never return. Countless entertainment professionals in perpetual unemployment—fortunate if they still qualify for unemployment benefits or union-backed healthcare. An entire season of “A Christmas Carol” and “The Nutcracker” productions moved online.

The stage was set for Governor Cuomo’s announcement this week to revitalize New York’s critical arts industry—an economic engine, essential creative torrent, and source of joy, community, and soulful fortification for all of us, and an industry devastated as much as any by the pandemic.

While we applaud the governor’s attention to the arts and some of the commitments he made in his State of the State, it will take a lot more to support the arts—both the institutions and the individuals—than pop-up performances by Chris Rock and Amy Schumer.

Don’t get us wrong: prominent New Yorkers sharing their star power is a piece of the puzzle (and, if nobody’s doing this already, let’s turn their pop-up shows into a Made-in-New-York Netflix special, and commit the proceeds to support regional non-profit theaters as the recent online production of A Christmas Carol and fundraisers by the Actors Fund have done), but such celebrity events are the icing, not the cake; the sizzle, not the steak. And New York’s arts need a full buffet of innovative, well-resourced, ambitious efforts—as creative and nimble as our arts world itself.

We may not be Chris Rock, but we are enmeshed in the world of independent arts. As performance practitioners, producers, and non-profit board members (Justin, the founder and Board Chair of The Tank, a 17-year-old performing arts venue committed to tearing down economic barriers to presenting and experiencing new work; Tiffany, a Tank Board Member and Artistic Director of Elisa Monte Dance, a 40-year old Modern dance company committed to creating an inviting, welcoming and forward thinking environment for dance artists) we’ve seen the fate of too many independent venues before and know the juggling act we all do to survive. We’ve also seen how artists—backed by smart public policy—can sustain lives for themselves and art for the public.

So what can the city and/or state do? From grants and loans to small theaters to negotiating with and supporting landlords with non-profit tenants to programs that keep paid staff in their jobs, rather than sending them onto unemployment, to initiatives that care for freelancers and independent contractors who make up so much of our cultural ecosystem, there is no shortage of policy possibilities.

Give property tax breaks to landlords to pass on to small nonprofits, guarantee loans to back payroll, hire artists to become teachers' aides that support small cohort learning when schools reopen, use theaters as classrooms because we need more space, open public spaces up to public performances that operate within clear, sensible distancing rules—a policy-maker or legislator doesn't need to look far to see endless possibilities that could subsidize our cultural landscape and leverage our cultural capital to help sustain, nourish, and rebuild our city.

(Hint: many of these ideas could be great ones in the best of times as well as the worst of times.)

We're not pretending to know which policy is best. We're the creators—we know what our city and society needs, we're here to help create it, and support the thousands of artists that call The Tank home each year however we can, as we have been doing during the pandemic in which we’ve kept our staff employed, expanded the team, and continued to give artists a stage and a stipend. Right now, we’re here to challenge and partner with the policy-makers ready to make that happen.

Here are a few principles that lawmakers should look to in order to ensure the vibrancy of independent arts in New York:

1. Space is sacred. We need space to create, share, and experience art and culture. In the near-term, that may be outdoor space. In the long-term, it's knowing we'll still have our indoor ones. When the world is ready to come out of our homes and off our screens we’ll need to have spaces that are protected for cultural experiences.

2. Creativity isn't free. We don't go into art for the money, but creating art can't only be a game for the independently wealthy. We want to respect creators' time and work, compensate them, and allow them to build viable lives off their cultural contributions. That means backing venues that support artists, backing salaries of staff in these venues, and promoting policies—from tax policy to health care to worker protections—that support freelancers and independent contractors.

3. We're all in this together. Everyone, from the student in universal pre-K to the housebound senior at risk in this pandemic, benefits from live performance. Let's subsidize it to make sure it's accessible to all: from where it takes place to how much it costs. And let's make sure that everyone has access to creating—without financial obstacles, gatekeeping or other systems of marginalization slamming the doors on the next generation of performers.

4. It can't just be the big guys. We want Broadway to come back; we want the members of Broadway unions and staff at big theaters to be taken care of until it does, but we want to make sure any program doesn't just work for the big business of Broadway but for the huge constellation of small, independent venues. For artists just starting out, it’s these venues that make New York worth coming to in the first place.

5. Be Bold and creative! This is advice you’d give to any performer, writer, designer—let’s challenge Governor Cuomo to the same. The governor announced a plan to employ 1,000 artists—why not 50,000? New York is possibly the only city that could implement a program at this scale and still engage only a small portion of residents who make a living in the arts. Why not build a New Deal, WPA-style public works corps, or create a program that floods our schools with artists running enrichment programs in underfunded neighborhoods or even in-person, small-pod experiences for remote students?

Governor Cuomo suggested pop-up shows—let’s make them every Saturday night, in every town and city that can partner to host them, every week until the pandemic lifts, bringing together the headliners with the newcomers, giving a boost to the emerging artists on the coattails of our Empire State celebrities? Governor Cuomo talked about flexible seating—how about flexible real estate? A program to give empty spaces for a year to arts nonprofits, giving landlords life in their storefronts and covering utilities or insurance, then work with them to scale up to a mutually agreeable rent in subsequent years. Or borrow “cheap money” with interest rates so low and build and update arts venues across the state. Use union labor, put folks to work, and prepare for the next generation of theater- and concert-goers ready to emerge from the covid cocoon.

If we look at major legislative achievements in our history they relied on the combined efforts of everyday people, artists, activists, and legislators. Now is the time for a big achievement.

Independent performance spaces are the lifeblood of the cultural life of New York City, pumping ideas and creativity and talent through every fiber of city life. Small arts venues give performers their first stage—whether those artists are stepping up from the Bronx or busing in from Buffalo. These are the venues where you can take risks as a performer and learn your craft. It's where young and new audiences can afford to see shows. And these are the spaces from which the creators emerge who then shape our culture through theater, dance, film, music, and more.

There's no question that New York runs on cultural energy, from the bright lights of Broadway to the world-class concert stages to the glorious outdoor festivals. The city needs those venues open again, when it is safe for performers, staff, and audiences. But the cultural heart of our city can't beat again without the lifeblood running through it—so any plan to support Broadway or Lincoln Center or BAM needs to also ensure Off-Off-Broadway, independent music venues, rehearsal spaces, and the ecosystem of small performing arts spaces, come back. There is more than one way to be an artist. Not everyone wants to be The Metropolitan Opera or New York City Ballet. We need small and mid-sized companies, independent artists, collectives, and community-based art to create a healthy arts ecosystem.

In the best of times, independent spaces like The Tank exist on a razor's edge—a couple bad box office months away from insolvency or one greedy landlord from a rent hike and eviction. You can fill column after column with the names of the beloved venues that have closed in recent years: as prominent as CBGB’s and UCB, as quirky as the Zipper, Galapagos, and Shetler Studios—and those are the famous ones. In the best of times, it's the mix of community support, shoestring budgets, volunteer labor, staff devotion, and luck that keeps these venues alive. Having moved among more than half-a-dozen venues since our founding, we feel fortunate every day we are able to continue in our artistic mission.

So in the worst of times—which a pandemic is for the live arts—we're all in deep sh*t. Venues that eke by on $10 tickets are locked up tight and people should be able to experience quality art at this price. Volunteers and artists are facing their own economic and health crises. Landlords that want to be generous face their own financial crunch, as do foundations and donors. Companies that are too small to be taken seriously for loans may just blink out.

Think about what artists have contributed to New York City. In a time when the city is experiencing collective trauma, allow artists to do what we do best—heal, entertain, and bring out catharsis. When our city recovers—when, not if—we'll need these venues, or at least the people that brought these venues to life to help create new ones. And if those people flee the city or flee this industry or can't overcome their own financial insecurity to produce, support, and give their life to art, then our whole city will be the worse for it. Although New York is extremely competitive it is also a place where you can create opportunity. Dreams come true here. Everyday we are living ours.

The show must go on. The show will go on. We're not giving up on New York. We know New Yorkers won't give up on us. And we need New York—the government, institutions, power-brokers, policy-makers—to do the same.

***
Justin Krebs is the founder and Board Chair of The Tank and a candidate for City Council in Brooklyn’s 39th District. Tiffany Rea-Fisher is a Tank Board Member and Artistic Director of Elisa Monte Dance. On Twitter @justinmkrebs and @treafisher.