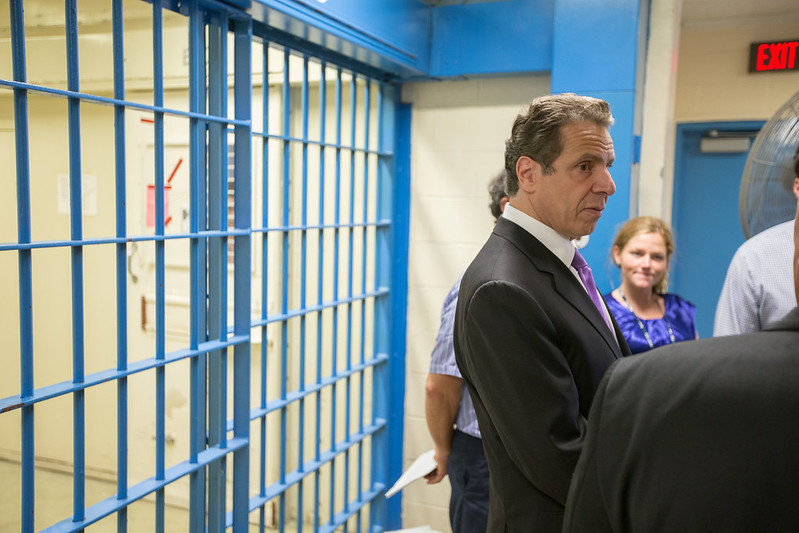 For nearly a year, we’ve borne witness to the devastating effects of COVID-19. We wept at the sight of fellow New Yorkers entering hospitals, and at the images of trucks storing our deceased neighbors. But there are tens of thousands of New Yorkers whose pandemic traumas have, by design, been kept out of our sight. They are the hardest hit and the least protected. These are the New Yorkers incarcerated in jail and prison cages across the state, and our state leaders are failing them when they need help the most.

New York’s incarceration problem isn’t new or unique, but the failure of state leaders to respond to COVID-19 behind bars has spiraled an already horrifying crisis to new lows. With no option for social distancing, poor access to hygiene, and inadequate medical care, jails and prisons are coronavirus hot spots. Thousands upon thousands of people across New York’s jails and prisons have contracted the virus, and dozens have died. Inexcusable delays in testing made tracking the virus’ spread incredibly difficult. And a recent plan to vaccinate incarcerated people, which was only prompted by litigation, will only apply to people aged 65 and over and people the prison system deems as “medically frail.” It’s unconscionable that all people in jails and prisons aren’t being offered the vaccination like other people in congregate settings across the state.

This intensifying crisis didn’t prompt the immediate action we needed or that public health experts urged — to curb admissions and to release as many vulnerable people as possible. Instead, state leaders did the opposite. The historic bail reform laws passed in 2019 were working to bring the state’s pretrial population to historic lows at the beginning of the pandemic. However, months into the worsening outbreak, state leaders gutted key provisions, bringing the jail population up nearly 30% higher than before these rollbacks went into effect.

Just as troubling is the failure to release those inside state prisons. Over the past year, a shrinking number of people have been granted parole and New York’s strict parole laws mean that far too few can access this opportunity for release. This is unfortunately nothing new.

Before the pandemic, our elected leaders fell victim to the fear-mongering tactics that some backwards-facing members of law enforcement and media have recycled for decades. When bail reform passed in 2019, law enforcement flooded the media with inaccurate stories that were filled with lies and anti-Black rhetoric. The evidence has long made clear that reducing incarceration does not lead to increases in crime and, in the case of New York, bail reforms did not impact crime rates, according to the NYPD’s own data. What these reforms did was dramatically decrease unnecessary pretrial jailing at a time when jail made people four times as likely to contract COVID-19.

We cannot afford another legislative session of pandering to these dangerous fictions.

Our state leaders must take action to protect the more than 30,000 people in New York prisons. Even as some vaccinations roll out, Governor Cuomo must use his clemency power to immediately release people who are older, immunocompromised, and nearing release. The Legislature must work to reform a parole system that has resulted in far too few releases. Passage of both the Fair & Timely Parole Act and the Elder Parole bill will begin to offer the release opportunities people in prisons deserve.

Elected leaders must also revisit bail reform, be honest about why they rolled so much of it back, and actively work to address the rapidly increasing jail populations driven by their misguided rollbacks. The same leaders who invoked the names of Kalief Browder and Layleen Polanco to demonstrate the injustice of pretrial incarceration must recommit to bail reform so that too many other New Yorkers don’t come to the same tragic fate.

New York leaders failed to meet the moment to address COVID-19 behind bars, and they must act now before more lives are lost. It’s our moral obligation and it is in the interest of both our collective public health and safety.