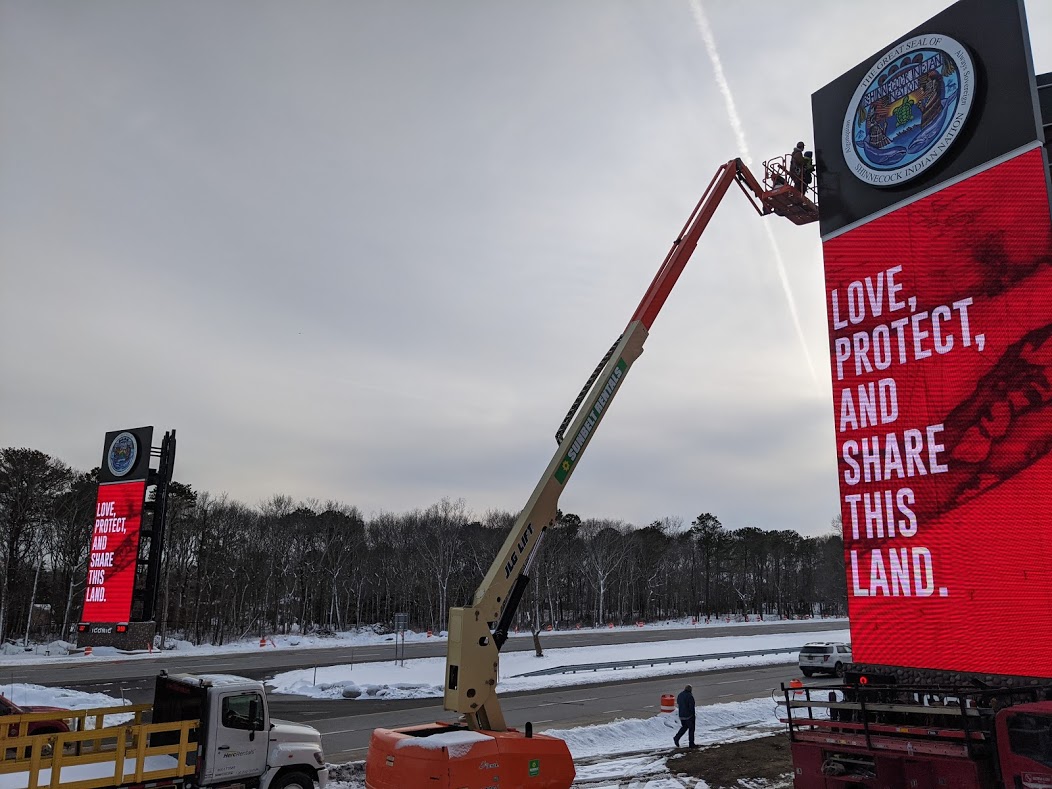 Whether hoisted up or torn down, historical monuments are proxies of political power. Each carries its own negative with it: what else could/ should be here? What else was here? A highway monument honoring indigenous communities is denigrated as anathema or praised as progress depending on how it casts and shifts power; these are the tensions of our unreconciled settler history.

The billboard monument on Sunrise Highway is a source of revenue for the Shinnecock Nation, a federally-recognized Native American tribe struggling to provide for its people in the bastion of wealth that is the Hamptons. The revenue from the billboards will be used for child care services, food security, reproductive health access, dental care, and other urgent needs, and will be a foundation for future economic development projects. Beyond aesthetics, this monument furthers the Shinnecock Nation’s ability to survive and thrive on their land.

The engraved mural on the Albany highway has little economic benefit for the communities it is supposed to honor, the Stockbridge-Munsee, St. Regis Mohawk, and Delaware tribes. The native dancers are a concession, a compromise meant to smooth over the NYS DOT’s determination to build on a sacred site. The DOT promised to “include the aesthetic treatment [to] reference the Native-American heritage and culture…” after learning that the site for the proposed flyover was ancient, and sacred. The image of native dancers petrified in rock unlocks the space for thousands of cars to whizz by on a new flyover. If there are potential benefits for the indigenous communities, they lie in the realm of representation and spirit; the material benefits flow directly to the State of New York.

On Long Island, the billboard monument trumpets the Shinnecock Nation’s continued presence within the place known as the Hamptons. The violent settler narrative of the “vanishing Indian” is no match for the 20-foot billboards and the twinkling lights offering one singular message: this is indigenous land.

This unapologetic assertion of Shinnecock presence has called down controversy on the monument since construction began in 2019. For some of the neighbors in the Town

of Southampton, this vision of indigenous survival and presence was a distasteful intrusion into their highly-priced dream of rural bucolia. Vacillating between concerns about aesthetics, to potential driver distraction, to the need to preserve the ‘character’ of the Hamptons, residents of Southampton claimed that their aesthetic preferences should be valued over the Shinnecock’s economic development agenda. But NIMBY hardly works when it is not actually your backyard!

If the Shinnecock billboard monument is a vision of future-facing indigenous sovereignty, the Albany mural’s origin story has troubling echoes of the past. The engraved dancers were a condition of the NYS DOT’s construction, but when the new flyover opened at the end of 2019 the mural was not installed; the DOT attempted to break even this modest promise about the erection and placement of these murals. After being prodded and cajoled into keeping its word, the state finally began installing the Capital Region murals in January 2021. The Northway’s monument tells an old story, a weary narrative about the slipperiness of New York State’s tongue toward indigenous communities echoes again.

The Capital Region mural requires little of the state government and the non-indigenous neighbors. The engraved dancers are an aesthetic supplement furthering the priorities of the Albany government; they do not displace the status quo bequeathed by the settler past. Alternatively, the Shinnecock billboard monument is a vision of indigenous sovereignty come to life and bathed in neon light. Created and designed by the Shinnecock Nation, it directs wealth to the Shinnecock, alone. Trumpeting the vibrancy of a community rowing hard toward continued survival, the billboard monument sends an unmistakable message of permanence and power.

Now framing the highway that cut through Shinnecock territory in 1959, the billboard monument makes it clear that the indigenous future is not petrified in stone, to be gazed upon and consumed; it is dynamic, shifting, and expanding around us. This monument does not ask that we remember the Shinnecock Nation, but that we respect it, its members, and their rights, today and beyond.

***
Abena Ampofoa Asare is the author of Truth Without Reconciliation: A Human Rights History of Ghana; writes, researches, and teaches about historical justice and the African Diaspora; and is an Associate Professor of Africana Studies & History at Stony Brook University.