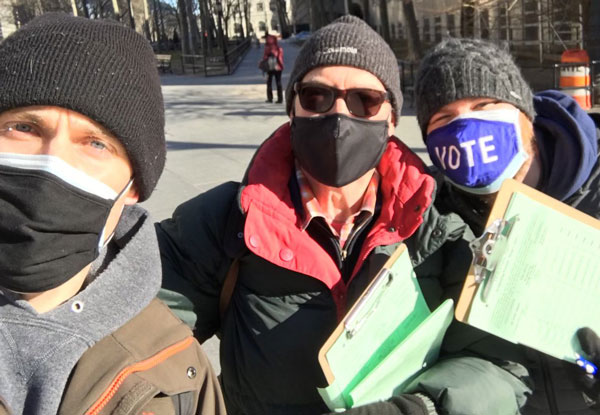 Today — Tuesday, March 2, 2021 — thousands of people are taking to the streets across the five boroughs. Armed with facemasks, gloves, hand sanitizer, more pens than you can imagine, and stacks of inconveniently-long papers, these determined New Yorkers have made the decision to participate in our democratic system by collecting petition signatures to help get candidates on the ballot.

Many of them, however, did not make this decision of their own volition. Instead, they were given an ultimatum by our governor, our legislature, and our judicial system: have unnecessary, person-to-person interactions during a pandemic, or you/your candidate can’t run for office.

Disappointed does not begin to capture how the three of us and over 350 New York candidates are feeling. We are scared, and deeply concerned. After a year of failing to plan, months of public consternation, and a dismissal by a state judge, candidates, their staffs and volunteers are now forced to put their health, and the health of prospective constituents, at risk all in the name of an archaic, outdated process.

Even amidst the state’s vaccination effort — which does not currently make candidates and their campaign staff and volunteers eligible — New York continues to report nearly 10,000 new cases a day statewide, and there have been more than 47,000 deaths from this disease in our state. Still, even vaccination is not a cure-all; the Centers for Disease Control and Prevention cautions that vaccinated individuals can contribute to the spread of COVID-19.

New York has been in a state of emergency since January of 2020, which means our state elected officials and party leaders had over a year to figure out a safe way to petition and determine which candidates make the ballot. Instead our government failed us with their inaction and people are going to be forced into tens of thousands of unnecessary interpersonal interactions.

Governor Cuomo, who has repeatedly put politics before the health and safety of New Yorkers, has state-of-emergency authority that would allow him to waive the 2021 designating petition signature requirements. No one questioned his executive order last year that immediately suspended petitioning and lowered the thresholds, and yet with ample time to better prepare this year, the bare minimum was done.

The Legislature also failed to adequately step in, and instead let proposals languish for months, only to end up passing legislation that does absolutely nothing to protect petitioners. The bill signed by the Governor lowering the total signature requirements is not enough. Exposure is exposure, and we now have several new, highly-contagious variants of COVID-19. Reducing the amount of time New Yorkers have to petition does not help either, we are now cramming together during that shorter time period to collect signatures. While the state of our economy is a valid concern and may warrant the opening of certain businesses, petitioning has zero economic purpose. We are talking about a some-risk, no-reward endeavor.

Another bill that passed extends County Committee terms for one year, but does not address other volunteer, largely uncontested political party seats, like District Leader or Judicial Delegate. Most importantly, the bill's main flaw is that it essentially creates a county-by-county “opt-in” solution that must be voted on by each county committee.

Other bills were introduced (and even passed) in the Legislature, but either fall far short of truly protecting petitioners, or were left to languish: A bill that prevents anyone from the opportunity to ballot petition is helpful, but extremely limited in who will benefit from it. More so, under this bill, the uncontested candidate would still have to go out and petition.

A bill that would allow for electronic petitioning, which is the strongest proposal in the Legislature, is still sitting in the Senate and Assembly elections committees, even though it was introduced on January 6. Had this bill been passed immediately, the Board of Elections may have stood a chance of implementing an online petitioning infrastructure. We know it’s possible — both New Jersey and Rhode Island recently announced the implementation of online designating petitions to reduce the likelihood of campaigns becoming superspreader events.

Right here in New York, we successfully implemented online solutions for legal processes, including remote witnessing and electronic signing by notaries, and remote Board of Elections hearings due to the dangers posed by COVID-19. But even if this bill allowing for electronic petitioning was passed within days of its introduction, two months notice may not have been enough for a body that is marred by inadequate funding, bureaucracy, and politics.

That’s why, when it became crystal clear our leaders would not go beyond a careless “we’re working on it” approach to prioritizing public health, we filed suit. But even during the hearing, we knew that the dangers of creating a superspreader event were not truly considered.

Some of the “alternatives” proposed by the judge, like setting up plastic tents along the city sidewalk to protect petitioners, are simply outrageous and not feasible. Anyone who’s petitioned knows that it is an intimate, one-on-one interaction. The petitioner must first engage someone, most often a stranger, and ask them to stop and speak, explain why they stopped them (because many people are unaware of this process), convince the person to sign for all the candidates on the petition, and witness the person sign. In large cities where you can’t canvass door-to-door to target voters, the most effective way to do this to collect the appropriate number of signatures is to stand on crowded and busy pedestrian areas.

Our electeds may have reduced the number of required signatures, but let’s look at a quick example, one that City Council Member and comptroller candidate Brad Lander shared: if a New York City Comptroller candidate needs 2,250 signatures under the new law, they’ll most likely collect three times that amount (which is standard practice for all candidates), amounting to 6,660 signatures per candidate. With seven candidates running for comptroller, that’s at least 50,000 mandated interactions. And let’s not forget: this doesn’t include candidates running for Mayor, City Council, Borough President, Manhattan District Attorney, District leader, or Judicial Delegate. Council Member Lander’s example was for only New York City, but we will have candidates throughout the entire state engaging in these dangerous interactions. How can we collect signatures  while maintaining social distance?

The truth is we can’t. New Yorkers deserve better, and we hope the state Legislature will reflect on the danger they put hundreds of thousands of people in, while most of them do not have to lift a finger and petition until 2022. To all of our fellow candidates, campaign staffers, and volunteers: please take care of yourselves, your neighbors, and your communities. Double-up on masks, rotate and clean pens, and commit to not challenging each others’ signatures.

Despite the failures of many, let’s get through this safely.