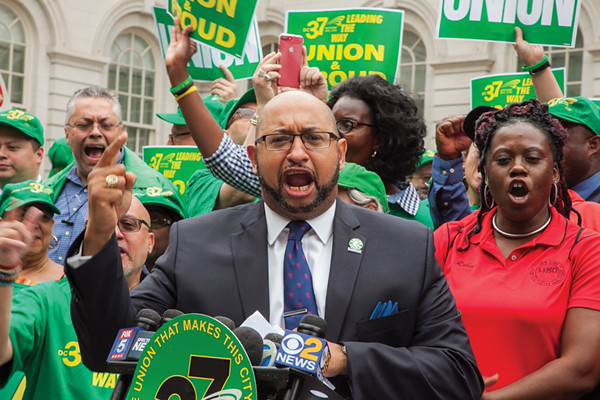 On January 1, a new Mayor will take on what is — even under normal circumstances — one of the most important and challenging elected offices in our nation. New York City’s next executive leader will inherit a city ravaged by the coronavirus pandemic and resulting citywide shutdown. The events of the last year devastated our communities, shuttered businesses, and took tens of thousands of lives. Whoever takes the city’s top job next must have the strength to confront this historical crisis and be decisive in action.

District Council 37 is New York City’s largest public sector union. We represent 150,000 city workers and 50,000 retirees. We’re the people helping your kids cross the street to school safely; we’re the paramedics who race around this city night and day transporting New Yorkers to care; we’re the ones working in your libraries and planting trees and flowers in your parks. Recently, we’re among those who you refer to as “essential.”

During this pandemic, our members suffered greatly. Some paid the ultimate price, doing their duty as essential workers, while thousands more were struck by COVID-19 yet thankfully recovered, although some with lingering effects. Even still, throughout this pandemic our members remained steadfast in providing services to the public. As we approach one of the biggest decisions we’ll make as an organization this year – which candidate to support for Mayor – we do so with the commitment and sacrifice of our members in mind.

The challenges our next Mayor will face are vast: closing a huge budget deficit, working with state and federal leaders on proper funding for our frontline workers and institutions, reaching out to the communities hardest hit by the pandemic, and daring to go beyond slogans and gestures by addressing the social and economic inequalities that plague our city. Ultimately, the person we elect to lead us must maintain the vision and strength necessary to push responsible public policy in a bold, new, direction.

Taking a new direction is often difficult — and it will be here — but this city demands a leader who has a firm grasp of the issues that will shape our future. We seek a mayor with the foresight to look beyond recovery and move New York City forward.

Strong leadership is required to improve and expand the city’s infrastructure, in making green initiatives a permanent priority, by taking up the fight to shore up our social safety net through ensuring equal access to the city’s social services to all New Yorkers, and to develop long-term reforms with non-negotiable goals for how our children are educated from preschool to our city university system.

We want a Mayor who isn’t afraid to fight and has the courage to not back down under pressure. A leader unafraid to stick by their principles is one who inspires.

When it comes to the city budget, our view is simple: A budget is a statement of principles. If you value essential workers and services, you will make sure they are funded and provided for.

Tens of thousands of frontline workers have spent the last year staring down the fear of being laid off. Only after weeks of tough negotiations were unions able to hammer out an agreement that held off – at least for now -- 22,000 layoffs of essential city workers. But the threat still looms.

An austerity budget is not the answer and our next Mayor must commit to find another way. Next year, we expect a Mayor who backs up this year’s campaign promises of valuing the people who make this city run and understands that investing in city services is critical to New York City’s recovery.

Our city survived thanks to essential workers in our public institutions, our first responders and workers in municipal hospitals tending to the sick, and school workers providing hundreds of thousands of meals to children and the elderly even though schools were closed. Public library workers went to great lengths to provide services. Parks workers and highway maintainers kept working. Workers in social services, 911 and 311 operators remained on the job in dangerous work conditions giving vital services to people in need.

The Mayor our union shall support will be someone who understands that if you value these institutions you first must also respect and value the workers who allow them to function, and not set them up to be the scapegoat for every budget crisis.

The city’s public workers did their jobs, even under the most exhausting and stressful conditions. We certainly expect the same from the candidate we choose to be our next Mayor.