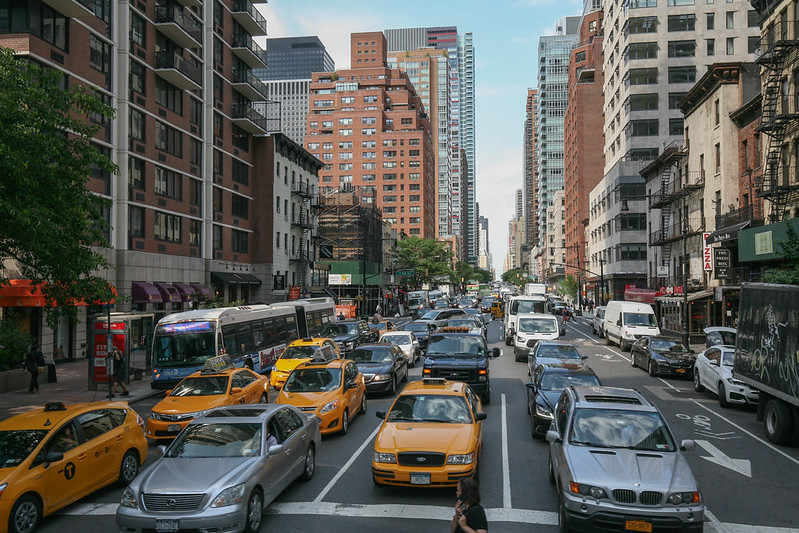 In 2019, my colleagues in Albany approved congestion pricing for drivers to enter a proposed zone in midtown Manhattan (over my strenuous objection and “no” vote). Under the plan, anyone entering the borough south of 60th Street in a car or truck will be charged an extra fee.

The idea was first proposed by former Mayor Michael Bloomberg in 2006 and was designed to reduce midtown traffic and add much-needed revenue to a city transportation system in dire need of it. It was set to begin this January, but was delayed because of COVID-19. Now, with covid far from over, city leaders and the MTA are rushing to push it through.

Even if it takes more time, New Yorkers - especially small business owners - have suffered enough. We should wait at least two years from the official end of the pandemic before we implement congestion pricing and burden drivers even further.

Early last year, New York City became the American epicenter of the biggest global health disaster in a century. COVID-19 has killed more than 31,000 city residents. It has cost more than 750,000 permanent jobs throughout the five boroughs. More than 43% of New York City businesses that were opened at the beginning of last year are closed right now — many will never open their doors again.

Small business owners are the lifeblood of New York City. They are the men and women who own and operate bodegas and body shops from Tribeca to Throggs Neck. They are the plumbers, electricians, and construction workers who trek in from all parts of Queens, Brooklyn, the Bronx, and Staten Island to build and maintain everything from the world-famous Manhattan skyline to structures for outdoor dining. Too many of our fellow New Yorkers live in areas far away from subway or bus lines. Just ask anyone living in Fresh Meadows, Marine Park, Throggs Neck, or on Staten Island who spends hour in traffic to drive to Manhattan — because it’s actually easier, but certainly not cheaper.

These entrepreneurs and tradespeople were already stretched thin before COVID-19 struck. They pay astronomical city rents and taxes, make payroll to keep other New Yorkers and their families financially secure, and spend thousands of dollars a year on gas, tolls, and parking just to run their businesses on a daily basis. Many have been hit hard by covid in their own households or their pocketbooks, sometimes both. Now, we are expecting them to begin to pay as much as $25 per day on top of what they are already laying out just to begin their workdays.

This was not fair two years ago (I tried rather valiantly to add an exemption for New York City residents). It’s absolutely beyond the pale now. We need to wait.

Last week, the Federal Highway Administration, under the U.S. Department of Transportation, announced that an environmental assessment (EA), instead of a more-involved and complicated environmental impact statement (EIS), would be enough to get the ball rolling on congestion pricing in New York City. After the review is completed, the MTA can begin the process of setting up EZ Pass cameras and ticketing systems north of 59th Street in Manhattan (the northern border of the proposed zone), as well as on the Ed Koch Queensboro Bridge, the Manhattan Bridge, the Brooklyn Bridge, and the Battery, Lincoln, and Holland Tunnels.

I was born and raised in the Hollis area of Queens, a quintessential middle class residential neighborhood in southeast Queens, pretty close to the Nassau border. My mother, a Cuban Jewish immigrant (who just turned 91 last week), was a public school teacher and a UFT member. My father, the son of Russian Jewish immigrants, was a veteran and an attorney who was elected by his friends and neighbors to represent them in the State Assembly — the same seat I now hold.

Despite my dad’s public profile, my parents were never wealthy. He passed away in 1994, but I can only imagine the fight he would have put up if he knew the state he ser ved for so long was going to make hard-working men and women — the same people he fought for in his time — pay a fee just to drive into Manhattan on the now-free bridges, especially during a pandemic of this magnitude.

As a former City Council finance committee chair and now an Assemblymember from Queens running for City Comptroller, I completely understand the need to add to city coffers. And as someone who has driven into Manhattan for much of my adult life, I fully appreciate the lofty goal of reducing traffic and the damage to our environment caused by cars and trucks.

But to accomplish those goals on the backs of hard-working New Yorkers and small business owners already devastated by the pandemic is just adding insult to injury.

We’ve come a long way as a city. We have weathered storms before. This one will subside. Until it does, we cannot afford to ask hard-working New Yorkers to shoulder another burden.

Waiting an extra two years is not too much to ask. Burdening our small business owners is, however.

***
David Weprin is an Assemember from Queens and a Democratic candidate for New York City Comptroller. On Twitter @DavidWeprin.