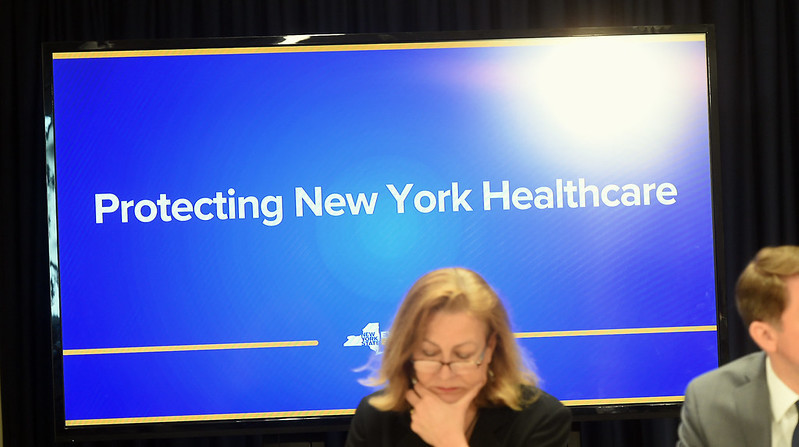 Lawmakers in Albany are again advancing the New York Health Act, which would abolish private health insurance and herd all New Yorkers into a state-run “single payer” plan financed with massive tax hikes.

Instead of building on recent progress—which has brought us closer than ever to universal health care coverage—this proposal would demolish the current system and put one-fifth of the economy under state control.

Here are 10 reasons why “Albanycare” is the wrong way to go.

It’s a Major Leap of Faith
Instead of modeling their plan on an existing system with a track record, the authors are attempting something radically different: a 100% tax-funded health plan, covering everyone and everything, with no limits on choice of provider, no premiums or copayments, and no private alternatives allowed. Nothing quite like it has ever been tried before—in the United States or anywhere else.

It’s Unnecessarily Disruptive
As of 2019, New York’s uninsured rate had dropped to a historic low of 5%, or about 1 million people, many of whom are eligible for existing programs. That puts universal coverage within reach through relatively modest investments and policy fixes. With a conversion to single-payer, the vast majority of the cost and effort would be focused on people who already have coverage—and who are by and large content with it. A single-payer system would also redistribute resources among providers, creating winners and losers with unpredictable effects on the stability of the system.

It Will Break the Bank
Even if you believe the new system can cover more people and more benefits at roughly the same cost (which is dubious in the extreme) this proposal would put the entire $300 billion health system on the state’s balance sheet—making the rest of government look small by comparison. At a minimum, the price tag could be expected to grow at roughly the rate of medical inflation year after year. Figuring out how to balance the budget of this one program—by cutting costs, raising revenue or both—would become Albany’s dominant obsession. Some level of rationing would be almost inevitable. Lawmakers would face choices between reducing payments to providers or limiting benefits.

It Requires Economy-Busting Tax Hikes
Financing single-payer—even at a cost-neutral level—would require state tax hikes on a scale never before seen in U.S. history. Some lower-income New Yorkers might save money compared to premiums, but only because their higher-income neighbors would pay drastically more. Those hardest hit by the taxes would be incentivized to move away, triggering a spiral of falling revenue and soaring tax rates. The state’s ability to raise money for other priorities—such as mass transit or renewable energy—would be diminished if not eliminated.

It Lacks Viable Cost Controls
The proposal would abolish existing restraints on spending (as flawed as they may be) without clearly identifying alternatives. For starters, most reimbursement would be on a “fee for service” basis, a model that encourages over-consumption—and rewards bungling providers by paying them twice, first to make the mistake, and then to fix it. The promise of “free” service without a consumer contribution, and without other constraints imposed by health plans, would encourage excessive use of certain tests and treatments, including many with limited or dubious value.

It’s Authoritarian
The bill mandates state-sponsored coverage for all New Yorkers, whether they want it or not, while effectively banning private insurance and private fees. Imagine imposing that level of government control over other necessities such as food, housing or education.

It Gives New Yorkers More Reasons to Leave
Wealthy individuals and businesses can easily avoid the new single-payer taxes by setting up residence in another state. People of even modest means who are happy with their current coverage might choose to live elsewhere. Medical providers who do well under the present system might decide they’re better off leaving. On the other hand, the offer of free long-term care would incentivize people to move here just before they enter a nursing home or seek other costly services.

It Leaves Too Many Questions Unanswered
The bill is long on promised benefits but short on details about the trade-offs. The most consequential decisions—starting with where to set tax rates and how to compensate providers—are left to be determined by future legislators, a future governor and a future panel of appointees. Nor has the proposal been subject to a full-fledged analysis or proper public hearings. Lawmakers should do their homework before passing what would be the most complicated and high-stakes program in state history.

It Depends on Trusting Albany
Running a health plan for 20 million people demands a level of competence and honesty that the state government has never demonstrated before. For a preview, look no further than New York’s Medicaid system, which is hugely ineffici ent and riddled with waste and corruption. Time and again, Albany puts the interests of players in the system—especially those who can afford lobbyists and campaign contributions—over the needs of the vulnerable people Medicaid is supposed to serve.

It’s the Wrong Response to a Pandemic
The best way to fight a viral outbreak is to prevent it from spreading in the first place. That’s primarily the job of the public health system—which focuses on entire populations rather than individuals and does not depend on insurance companies for money. Doctors, hospitals, nurses, etc., play the essential role of treating those who do become sick, but they’re not the ones who order quarantines, limit crowd sizes, shut down non-essential businesses or mandate mask-wearing. Most hospitals and doctors became less busy during the height of the pandemic, to the point that many hospitals furloughed employees and needed financial bailouts. When hospitals did become overwhelmed with patients, it wasn’t because people lacked coverage, but because the public health system had broken down.