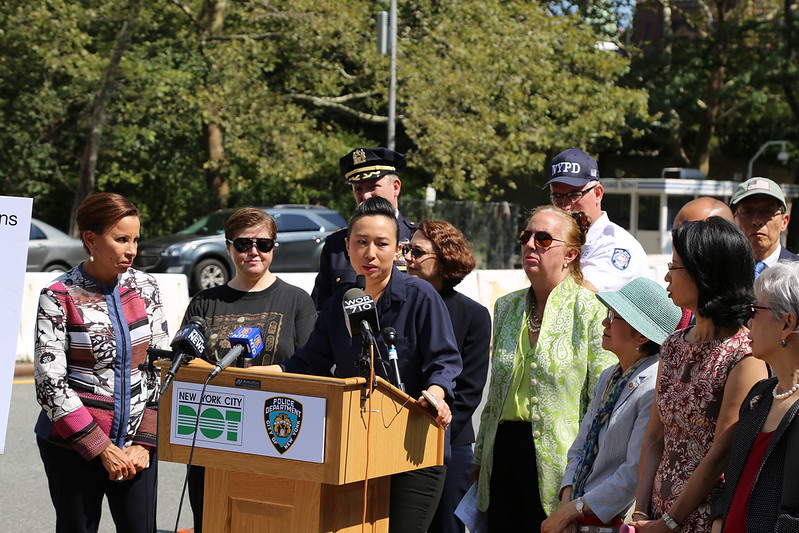 Every day, our court system loads New Yorkers down with additional fees that further criminalize poverty while doing nothing to make us safer. In fact, these court fees are among the government’s most effective means of extracting money from New Yorkers most at risk of poverty and least able to bear the financial burden.

How much money are we talking about? Every single day, New York’s courts levy around $14,000 in regressive administrative surcharges, fees and fines, on top of the money people are already paying for whatever minor violation they are accused of. These fees add up quickly and devastate low-income individuals.

These nuisance fines and fees are not intended to make our state safer, they are simply a way for the state to take in more money. And they are vastly profitable, raking in millions every year from some of our state’s poorest residents who are struggling to make ends meet and lift themselves out of poverty.

This isn’t just a story of poverty, it’s directly tied to the structural and racial inequities in our court system. In my district, which includes Chinatown, New Yorkers who face language barriers often find themselves facing late fees for fines and penalties levied in a language they can’t understand. Those fines ripple through communities — $175 for a misdemeanor here, $95 for a speeding ticket there — and are one reason why immigrant communities like those in Lower Manhattan fear seeking legal remedies in our courts. For them, the city courthouse is a place best known for draining their bank accounts (if they are banked). In fact, according to the New York City Bar, a third of all surcharge revenue comes from violations of the Vehicle and Traffic Law, not including DWI violations. And no offense is too small to be padded with multiple, opaque fees.

No matter what your economic status, if you are called before the court for any of these minor infractions, you’re likely to leave the building with your pockets lighter and your sense of justice dented. For the wealthy, that’s an inconvenience and a story to tell over dinner. But for the poor, especially those raising small children or caring for elderly loved ones, those fees mean the difference between making rent and searching for a homeless shelter.

What possible justice is that?

These fines disproportionately hurt lower income people, and the effects can easily snowball into perverse mockeries of how our justice system should function. At a recent press conference hosted by the economic and racial justice coalition No Price on Justice, Brooklyn Defender Services Staff Attorney Dane M. Fioravante laid out the horrifying case of one individual trapped in a cycle of fines and fees that ended at Rikers Island.

As Fioravante explained, in 2019 “Mike” (not his real name) was fined $200 for driving on a suspended driver’s license. Over the last two years Mike, like so many others, has worked hard to make ends meet. Unable to pay that fine, Mike found himself trapped in a debt cycle that ensnares too many New Yorkers. Earlier this year, police raided Mike’s home on Staten Island, terrifying his family and young child. What violent crime could have justified a full-on nighttime raid? Failure to pay his $200 civil fine during a pandemic that devastated low income communities.

Mike was moved from holding cell to holding cell, first on Staten Island and then in Brooklyn, where he waited until the next morning to see a judge. Still unable to pay his fee, Mike wound up on Rikers Island, one of our nation’s most violent institutions, all for a single suspended license infraction and the fees that came with it. Mike’s nightmare stay in the Rikers intake area would spiral into a four-day ordeal that unfolded in the midst of the jail’s ongoing humanitarian crisis. Our distorted fines and fees regime has turned Rikers into a debtor’s prison, and criminalized poverty on a scale that should disgust anyone interested in proportional and equal justice.

We’re making real progress in Albany toward limiting the scope of these extortionate fines and fees, but we must act faster and more broadly to correct this systemic injustice. Sometimes the slowdowns are unintentional, like when other criminal justice reform bills took priority. In other cases, right-wing media outlets pumping up a bogus “crime surge” narrative have actively scared lawmakers away from addressing issues like nuisance fees. But trapping low-income people in an endless cycle of debt and incarceration will never reduce crime or make our communities safer and may well have the opposite effect.

Fortunately, some elements of fine and fee reform are already improving the lives of New Yorkers. The Driver’s License Suspension Reform Act went into effect on June 29, ending driver’s license suspensions for unpaid traffic tickets. Even better, the measure allows New Yorkers with unpaid traffic tickets to set up payment plans that get them right with the law without destroying their financial stability or means of getting to and from work and taking other essential trips. No one’s life is made more stable by taking away their means of earning an honest living.

That’s a good start, but New Yorkers deserve better. That’s why I’ve partnered with my colleague, State Senator Julia Salazar, to introduce the End Predatory Court Fees Act prohibiting mandatory minimum fines for penal law and traffic offenses. In addition, our legislation also tackles probation and parole surcharges, a cruel set of fees that almost exclusively punish low-income people unable to pay for their freedom even though they are otherwise eligible for a termination of sentence.

Our legislation would finally end the inequitable financial burdens placed on defendants by statutory provisions that pad New York’s public finances with complete disregard to how they undermine our communities and public trust in our judicial system. We do this by empowering the courts to significantly reduce or eliminate outright many of the onerous fees New Yorkers have grown to hate. In its place, we must focus on policies that actually yield positive outcomes for our residents and our state. The exploitative fees that fill up our courtrooms only make that job harder.

New York can get serious about building a justice system that strengthens our communities instead of siphoning off their hard-earned money through administrative trickery. By reforming our courts to be free from the profit incentive, we can guarantee better representation and more productive outcomes for all.