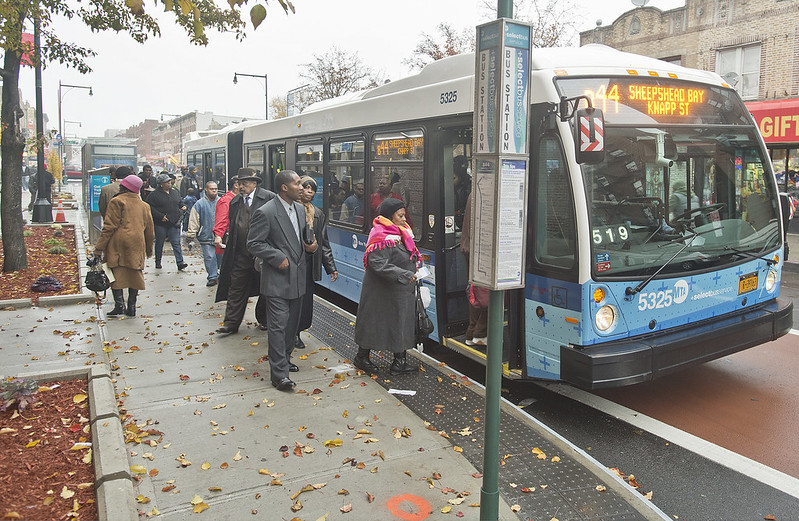 The MTA announced this past summer that the borough network redesign studies that were halted by covid will resume this fall. A Brooklyn bus network redesign is long overdue, but it must be performed in the correct manner. We have no indication that such is the case.

The intent is to design routes “from a blank slate,” which is unrealistic. Existing route segments should be realigned and service gaps filled. Is the study’s purpose to reduce operating costs resulting from the 40% bus passenger decline since covid or to make destinations more accessible and shorten passenger trip times?

The study is not objective. The MTA begins with the assumption that the major problem is buses are too slow and one solution is to eliminate bus stops so that all local bus routes in effect become Limiteds. They propose providing more bus lanes or busways, without considering the impacts on traffic. Slow buses are not the problem. The problem is people's trips need to be faster with better and more reliable service and requiring fewer connections.

The MTA never solicited problems and possible solutions from Community Boards. Instead, they held lightly-attended and ill-publicized workshops merely informing the public what they are trying to accomplish. Opinions from the public were solicited on post-it notes. Does the MTA even care what you think?

Surveys were performed and quotes for the Brooklyn Existing Conditions Report were carefully selected that fit into the scenario of how the MTA wants to proceed. People also were stopped on the street where they were informed of the MTA’s goals for the study like having the buses go faster. The public was led to responses that would support the measures being proposed like more bus lanes and fewer bus stops.

This report sets the stage for wider spacing between bus routes, increased walking to bus stops and bus routes, fewer express bus routes (because they cost too much to operate) and straighter routes requiring additional transfers, although many (45%) riders surveyed preferred using only one bus even if it took longer.

These measures, the MTA believes, will encourage bus travel. They are wrong. Bus travel will be discouraged and patronage will further erode if more stops are removed and there is less route coverage. The MTA asks riders to choose between bus frequency and route coverage, implying they cannot afford to provide both. The question is absurd. An adequate system needs both frequency and coverage. It's like asking a prisoner who has not eaten in three days if he wants food or water.

The MTA correctly states some bus routes are still based on 1920 trolley routes. And some bus routes are still based on 1930s bus routes. For example, the southern portion of the B43 is based on the need to directly serve Ebbets Field from Williamsburg, when today it would make more sense to better serve Kings County Hospital. The B16 doesn’t run straight on 13th Avenue because when the bus route started in the early 1930s, there was no 13th Avenue Bridge crossing the Sea Beach tracks. The bus had to be diverted to Ft. Hamilton Parkway.

Also, at that time Maimonides Medical Center was a small local Hospital called Israel Zion Hospital and did not merit a bus route along the length of Ft. Hamilton Parkway. So today the B16 serves double duty serving both 13th Avenue and Ft. Hamilton Parkway, when two separate routes would make more sense providing more direct travel.

The major purpose of the Brooklyn redesign study should be to alter outdated routes such as these so they provide more direct travel, reducing the need to transfer and therefore reducing travel time. That would encourage ridership.

Downtown Brooklyn has and will see more development than any other part of Brooklyn. Yet, the Existing Conditions Report states that due to the numerous subway lines operating there, its bus service needs to be trimmed and resources allocated elsewhere. That would result in additional bus transfers and travel times, rather than the opposite. There isn’t even any mention if there is capacity on the subways to absorb additional bus riders. If the subway was a better alternative, those bus riders would be using the subway today.

If the MTA follows through on its recommendations for the Bronx and Queens, Brooklyn will also likely see over half its local bus stops eliminated, resulting in longer walks to and from a bus route. This will result in longer trip times for passengers with minuscule savings in bus running times. That is because if a bus stop is lightly used, the stop is often skipped anyway. If it’s heavily used but eliminated, then the boarding times at adjacent stops will be increased and the only time saved are the seconds for acceleration and deceleration.

Extra walking is also very inconvenient during inclement weather and especially for those with mobility challenges. Massive bus stop elimination would discourage ridership. Why take a bus at all if your trip will still require you to walk a mile? You are better off taking an Uber or just walking the entire way. Over 2,000 people have signed the petition opposing massive bus stop elimination.

The study also needs to determine how to eliminate double fares, especially for short trips requiring multiple vehicles. Why should a person have to take two long bus rides to save a fare when two short bus rides and a subway might be quicker? Unlimited travel within two hours should be allowed regardless of the number of mass transit vehicles required.

The MTA is too concerned with losing revenue by allowing round trips on one fare, which would actually encourage ridership, recouping monies lost by allowing riders to combine errands for one fare. The vast majority of riders require more than two hours to make a round trip and would still have to pay twice to make a round trip. The MTA and its predecessors also did not allow many bus-to-bus transfers or bus-subway transfers for over 50 years, using the same excuse that too much revenue would be lost. It is time to take a new approach regarding fares.

Fare increases burden double-fare riders twice as much and route revisions requiring additional double fares are not fair. Former Limited B46 riders in Williamsburg had to switch to the slower local when SBS was introduced if they already required a transfer or else pay a double fare to use SBS. Fare-capping would help but is not a solution, even if it were done on a daily basis. It only has been proposed on a weekly or monthly basis. As more workers work fewer than five days a week at an office, weekly and monthly capping becomes less advantageous.

You also can’t take an SBS and change to a local or vice versa if you already transfer, without paying an extra fare. The MTA eliminated a long-standing policy of route modifications not requiring extra fares many years ago and now adds a third transfer only when a community protests. They also do not publicize these three-legged transfers to prevent new riders from using them.

An “improved” routing network should not require many (30% or more) to walk further and take extra buses (possibly paying extra fares) with longer trip times so that the MTA can operate fewer routes with buses saving running time to reduce operating costs. I developed an improved Brooklyn Bus Network that can be found here. In my plan, the local bus network is restructured with the major objective of increasing ridership by making the system more user-friendly.

It accomplishes this objective by making most trips possible using only one or two buses or combination of bus and subway. Service gaps are filled; routes are generally longer, straighter, and more direct, but with most buses traveling shorter distances to better increase reliability and better fit service to demand. Airport access and interborough travel are also improved. Implementation is accomplished in phases with a small investment in increased operating costs to generate greater revenue. A cost-neutral approach is wrong for a borough that has been growing significantly since 2009 in both population and businesses.

We now have a real opportunity to improve Brooklyn bus service. Let’s not waste it.

***
Allan Rosen is a retired and former director of MTA NYCT Bus Planning with three decades experience in transportation and a Masters Degree in Urban Planning. On Twitter @BrooklynBus.