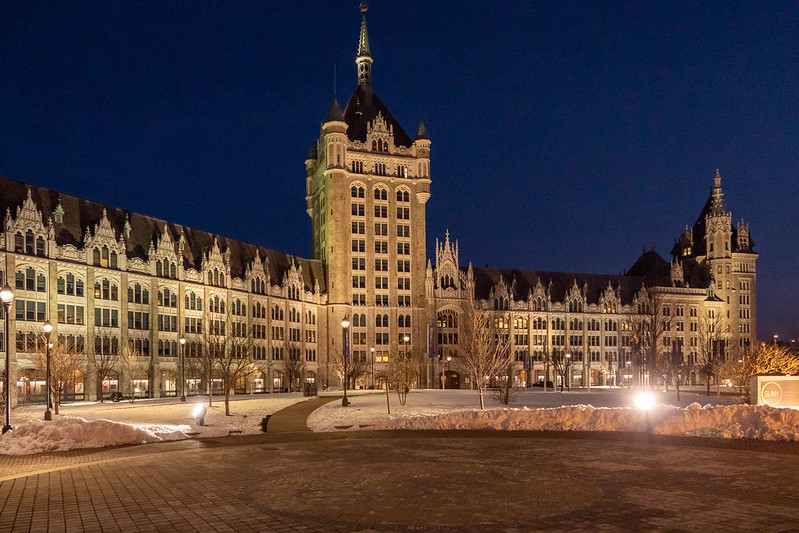 New Yorkers have a birthday of sorts coming up. On April 20, 1777, the Convention of Representatives of the State of New York, an ad hoc group of patriot leaders elected the previous year to guide New York’s Revolutionary War efforts and develop its first constitution, finished its work on that document.

It was a remarkable document, prepared on the fly by the group that had kept out of reach of British forces by fleeing from New York City (just before it was occupied by the British in 1776)  to White Plains, to Fishkill, and finally to Kingston where it completed its work on the document.

The work was done in such haste that the final version of the document included cross-outs and marginal corrections. There was no time to even make a clean copy before the document was read publicly for the first time by the convention’s secretary on April 22. He climbed atop a flour barrel outside the building where the group had met and read it aloud to Kingston citizens. Then, the new document was rushed off to the printer.

The document declared that the convention, acting “in the name and by the authority of the good people of this State, doth ordain and determine and declare that no authority shall in any pretense whatever shall be exercised over the people or members of this State but such as shall be derived from and granted by them.”

In 1777, a document purporting to represent the consensus and will of the people was a startling, radical departure from the past.

The original copy of the first constitution is preserved in the New York State Archives, and can be read online at the Yale Law School Avalon Project. William A. Polf’s 1777:  The Political Revolution and New York's First Constitution provides a good introduction. It is also described in Peter Galie’s Ordered Liberty: A Constitutional History of New York and in my book, The Spirit of New York: Defining Events in the Empire State's History.

Hastily-organized elections were held in the spring and summer and the first legislature assembled in Kingston in September 1777 and got to work. The fledgling government had to flee as British troops assaulted and burned Kingston on October 16. It soon re-assembled in Poughkeepsie and resumed work. By then, patriot forces had defeated British incursions from the west (at Oriskany) and the north (at Saratoga) and a minor incursion from the east (at Bennington).

Why should New Yorkers (and people beyond New York) be interested in the state’s birthday and its critical origin and survival year of 1777?

It is a key part of an inspiring against-the-odds story of determination and resilience. In early 1777, it was by no means certain that the rebellious colony of New York would survive and achieve independence along with a dozen other colonies. By the end of the year, New York had written a constitution, established a government, held elections, fended off invasions from three directions, and survived invasion and destruction of its capital.

It was unprecedented. The writers had some British and other European precedents, New York’s own experience, and political philosophers to draw on. But there was no such thing as a “state” when they began. Other rebellious colonies were still writing their own independence documents. The Articles of Confederation, creating a government framework to link the new states together, would not be created until later in 1777.

It represented compromise and consensus. The writers had a number of disagreements and varying viewpoints and perspectives going into the process. But along the way they put aside their differences, compromised, and came together to develop a consensus document. That process is worthy of study now, when too often it seems difficult to reach agreement on divisive political issues.

It was concise. At about 5,000 words, it also included the Declaration of Independence as a preface. It outlined the powers of a two-house legislature (similar to what we still have today) and the governor (also similar in some ways to what we have now), provided for a secret ballot, and endorsed freedom of religion. There was a placeholder for the judiciary; that had to be fleshed out by the first legislature.

It was successful, flexible, and enduring. The first constitution proved to be a viable framework for years when New York grew remarkably fast. It endured without major changes until 1821. Even then, the structural changes were relatively modest. The new constitution streamlined the process for appointing state officials and strengthened the governor’s veto power.

It left important work undone. The convention discussed abolishing the horrible practice of slavery but in the end did not. That had to await legislation in 1799 and 1817. It included restrictions on voting rights for men, which were gradually eased over ensuing decades, and denied women the right to vote, not rectified in New York until 1917. The constitution had no bill of rights other than protection of freedom of religion. The legislature enacted a bill of rights in 1787 and they were embodied in the 1821 constitutional revision.

***
Bruce W. Dearstyne is a historian in Albany, NY. SUNY Press recently published the second edition of his book The Spirit of New York: Defining Events in the Empire State's History and will publish his next book The Crucible of Public Policy: New York Courts in the Progressive Era later this year.