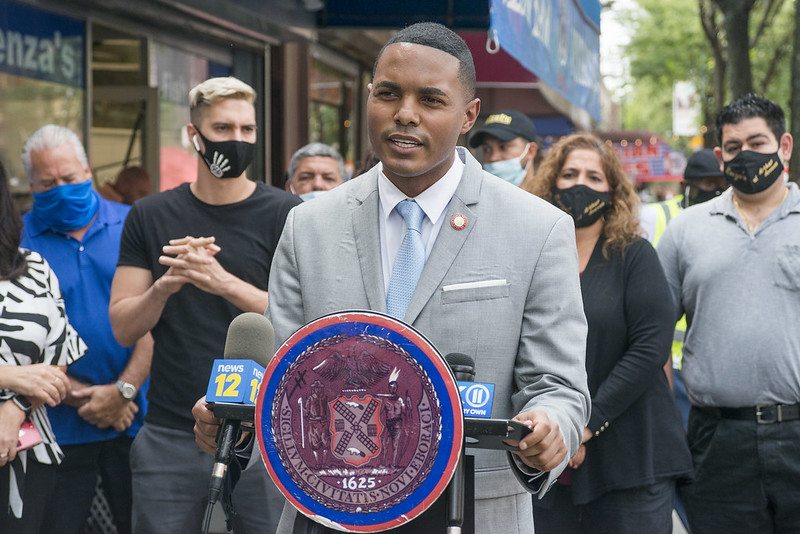 As congressional representatives seek re-election this year, there is one member of Congress who doesn’t need to worry about having an opponent: Rep. Ritchie Torres. At the time of this writing, there is no word of a candidate circulating petitions to challenge Torres in this June’s Democratic primary. As political insiders well know, it is rare for an incumbent in New York not to have a challenge.

Many may have taken notice of Torres’s popularity in his congressional district, as is evident in this Data for Progress poll. According to the poll, Torres enjoys a 73% favorability rate in the 15th Congressional District.

The rise of Ritchie Torres is one that I foresaw in these pages some years ago. I believe the rest of the country will continue to share our New York experience of Torres as a thoughtful legislator who has an uncanny ability to dig through complex policy issues and who articulates his positions clearly and concisely.

Equally fascinating to me has been Torres’ political philosophy since 2013, a posture of pragmatic progressivism. The “pragmatic” part of this posture has earned Torres the scorn of some other progressives.

Contemporary political progressivism in the United States has several variants. The current trajectory of progressive politics can perhaps be distinguished between those on the socialist left and those on the liberal left, who consider themselves more pragmatic.

By “pragmatic” I am not referring to the philosophical school of thought of pragmatism made popular by the likes of William James and John Dewey in the 20th century. Rather, I refer to “pragmatic” as an electoral and governing approach to politics that seeks to achieve social ends through the most practical means possible.

These two distinguishing markers of political progressivism–the socialist left and the liberal left– are hardly a recent phenomenon. Since the 20th century, progressive politics has been quite diverse. Interestingly enough, the socialist left once had a similar influence in New York and national politics to what it has now, though the impact is perhaps a bit greater now if we consider the number of socialists that are being elected to local office. The recent electoral successes of socialists are due to their intentional efforts to work within the Democratic Party instead of functioning as a third party as they did decades ago.

Perhaps the most prominent and influential socialist figure in 1930s electoral politics was Norman Thomas, a member of the Socialist Party of America. Thomas’ charm, charisma, and intellect helped to catapult the socialist agenda into the national political discourse.

Yet this socialist influence began to wane with the social progress achieved through FDR’s New Deal initiatives. What replaced it for the next few decades was the influence of the liberal left.

What has been deemed “liberal left” I call pragmatic progressivism. And it is in this wing of progressive politics that Ritchie Torres resides. Pragmatic progressives seek most of the same goals as other progressives: universal healthcare, adequate funding for education and housing, fair wages, among others. The “pragmatic” element in this type of progressivism acknowledges that to function, politics must maintain a healthy equilibrium between competing interests.

The key difference between the socialist left and pragmatic progressives lies in the paths they take to achieve progressive aims. Pragmatists assert that the attainment of progressive goals may entail negotiating with those competing interests that are at different points along the political spectrum. Therefore, pragmatists make no bones about the fact that they must work within an imperfect and indeed broken system full of people with different opinions and constituencies that make these negotiations necessary. Pragmatists see these negotiations as necessary for the work of progress.

If Norman Thomas was the face of the socialist politics that preceded current socialist movements, like the contemporary Democratic Socialists of America (DSA), then the theologian and ethicist Reinhold Niebuhr, in the same era, represented the pragmatic progressivism exemplified today by Ritchie Torres.

In the 1930s, Niebuhr was part of the Socialists of America party and even ran for office twice on their ballot. The realities of World War II and the social and economic impact of FDR’s New Deal changed his politics, leading him eventually to co-found New York’s Liberal Party and later the Union for Democratic Action, which eventually became the Americans for Democratic Action. Niebuhr understood that the seeking of political perfection was far from realistic; therefore the necessity to seek compromise. He believed that the idealism of the socialist left, as was evident by their propensity to clamor for pacifictic alternatives during World War II, was indeed an attempt to seek the perfect. Yet, Niebuhr would assert that the perfect can’t be the enemy of the very good.

Torres reflects in word and deed the type of progressive politics espoused by Niebuhr—seeking progressive goals by balancing realities of politics and governance.

When have we seen Rep. Torres’ inclination toward this kind of pragmatic progressivism? Let’s take a look at his stance on the “Defund the Police” movement prominently espoused by those on the socialist left. Speaking to Jose Diaz-Balart on MSNBC last month, Torres said, “...any elected official who’s advocating for the abolition and/or even the defunding of police is out of touch with reality and should not be taken seriously.” Torres prefers to speak of a “reform the police” type of movement, one that acknowledges the necessity of policing for ensuring public safety while acknowledging also that there are structural deficiencies within police departments that need deep and sustained reform. Torres says, “What most New Yorkers want is not less policing or more police, but better policing — more accountable and transparent policing.”

Perhaps this stance of Torres’s points to his inclination to work within a broken system in order to seek necessary changes from within rather than seeking a total abolition of a system that doesn’t work for many, particularly for communities of color. Hence, Torres has developed positions and backed legislation that seek to attack root causes of crime like poverty and housing instability, and pursues policies to address them.

Torres’ position on the “Defund the Police” movement and his penchant for reforming systems from within deficient structures could perhaps be seen in a police reform bill fight in 2017, during his tenure in the New York City Council.

The 2017 Right to Know Act, a controversial and much-debated set of police reform bills, sought to deter police abuse and to ensure transparency in any interaction between an officer and an individual.

There were two bills in the Act, one introduced by then-City Council member and now Brooklyn Borough President Antonio Reynoso and the other introduced by Torres. After hearings and negotiations, Torres made changes to his bill.

The Reynoso bill was championed by many police reform advocates, earning the praise of Monifa Bandele, a spokesperson for a prominent coalition, since Reynoso’s bill would bring “transparency and accountability regarding searches during non-emergency policing encounters that have no legal basis other than a person’s supposed consent."

Of Torres’ bill, Bandele said: “This NYPD bill being advanced by Torres is neither the Right to Know Act nor a compromise, but political backroom dealing and a surrender of legislative independence to the NYPD and the Mayor.” Bandele’s statement reflected the sentiment of other reform advocates, who felt that the updated version of Torres’ police reform bill conceded too much to the NYPD.

Torres indeed negotiated particulars of the bill with NYPD representatives and the mayor’s office. But he insisted that any concessions made to the de Blasio administration would ensure the needed transparency in a number of interactions between police and individuals.

Torres earned the scorn of both police reform advocates and the police unions. History has shown that this type of criticism from both extremes is often the result of political decisions made by pragmatic progressives. Acknowledging the need for negotiations between disparate political interests and views in order to achieve progress on behalf of the citizenry never earns them friends at the extremes and most devoted parties, but does win them broad support among the more pragmatic general population.

Torres has done this again with his position on the status of Puerto Rico, siding for statehood for the Caribbean island, a position favored by conservatives on both the island and the mainland. A little over two weeks after winning his congressional race in a historically majority-Latino (and Puerto Rican) congressional district that was once represented by Herman Badillo, Torres penned an op-ed declaring his support for Puerto Rico statehood. His statehood stance can be succinctly captured by his declaration that “As Americans, we must speak out forcefully against the de jure disenfranchisement of our fellow citizens in Puerto Rico, for it represents a deep rot at the very core of American democracy, not to mention a manifestation of the very systemic racism against which millions have stood in protest.”

Using the lens of systemic racism to critique the current status of Puerto Rico is in essence utilizing a progressive principle (the fight against systemic racism and the acknowledgement of Puerto Rico’s colonial status) in order to stand on the side of statehood, a position long held by mostly conservatives in Puerto Rico.

This position places Torres on the opposite side of the issue from the other two Puerto Rican congressional representatives in New York City, Reps. Nydia Velázquez and Alexandria Ocasio-Cortez, both of whom have introduced the Puerto Rico Self-Determination Act of 2021. The bill seeks to give Puerto Ricans on the island the opportunity to finally determine their status through an elaborate process that would include publicly-financed elections and a convention with delegates elected by the Puerto Rican people. Torres believes that Puerto Ricans have already determined their will by a recent referendum in which voters selected statehood as their preferred option.

While the police reform bill and Torres’ position on the status of Puerto Rico may cause some to question his progressive bona fides, it is also important to remember his championing of a myriad of progressive issues. For instance, Torres has introduced a bill that would require the Federal Home Loan Banks to drastically increase investments in affordable housing, community development, and small business lending. And of course, on the issue of public housing, few elected officials in New York have been as relentless and consistent on the need to revamp our public housing facilities through massive federal investment. More recently, Torres led a push, supported by Ocasio-Cortez, demanding that billions in funding be secured for public housing and rental assistance.

It is difficult to peg Torres solely on one end of even the progressive spectrum. Throughout his career as an elected official, Torres’ positions have reflected the thinking of a pragmatist who acknowledges the need to balance interests for the greater goal of achieving progressive values.

***
Eli Valentin is an adjunct professor at Iona College. He writes regular columns for Gotham Gazette, largely focused on Latino politics in New York City, and is a frequent guest political analyst at Univision NY. On Twitter @EliValentinNY.