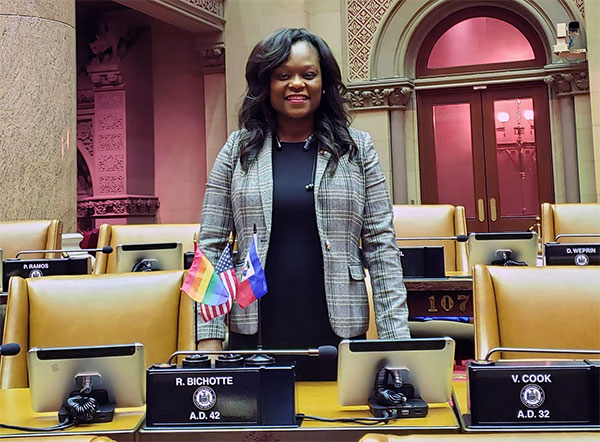 Abortion is a matter of life and death for a woman. Those who are pro-choice like me know that access to safe abortion care can prevent a woman from losing her life, and restrictions can - and are - ending it. And for Black women like me, who know what it’s like to lose a child because of maternal healthcare inequities, this is a nightmare that’s only going to get worse.

Women pioneers fought tirelessly to grant us suffrage, reproductive freedom, and other essential rights. But today our rights are being stripped away and we cannot let that happen.

Access to safe, quality, and unbiased health care for pregnant Black women has always been challenging -- and now access to a safe abortion, a woman’s civil right, has essentially been eliminated in Texas. With the Lone Star State outlawing abortion after six weeks of pregnancy, in the midst of another spike in covid with the Delta variant, risks to women’s health -- in particular Black women’s health -- have been further exacerbated.

Data shows there has already been a longstanding Black maternal healthcare crisis.

Last year, more than 700 women in the United States died during childbirth and the maternal death rate among Black women was three times the rates for white and Hispanic women. Maternal mortality is worse in the United States than in any other developed nation in the world. The majority of pregnancy-related deaths are thought to be preventable.

I was almost one of the victims of pregnancy-related death.

Almost five years ago, a prestigious university-affiliated New York City hospital turned me away after doctors discovered I was three centimeters dilated and experiencing preterm labor. Shortly after I was told to leave, my water broke, and I delivered my son Jonah prematurely at a local community hospital. My baby was one of the more than 20,000 infants that didn’t make it that year, and I almost lost my life too.

At all stages of health care, women -- especially Black women -- deserve better care and protection of our rights.

Despite Black women making up just 13.4% of the U.S. population, almost one-third of the women affected by the Hyde Amendment -- which prohibits the use of Medicaid funds for abortion care except in the most extreme cases -- are Black. "There has been a growing body of research that is showing that structural racism is playing a role with regard to these disparities," said Dr. Wanda Barfield, director of the CDC's Division of Reproductive Health.

This isn’t just about saving lives. It’s about taking away rights and decision-making power from the people to whom they rightfully belong.

It’s unconstitutional and inhumane. But, even though the Supreme Court declined to block the Texas law it did so without ruling on whether it is constitutional, allowing it to be challenged.

Access to reproductive health care is everything when it comes to saving the lives of women, overwhelmingly so in the case of Black women.

Texas’ law does more than just take choice away from women; it puts a bounty on the heads of every woman and family seeking an abortion in the state, and allows private individuals to enforce the law. If we look at other countries as a guide, or even our own history, the Texas abortion law won’t stop most women from having abortions, even though it strips their legal rights and puts their lives more at risk. It will mainly stop women who can’t afford to access abortion care from getting it safely, leading to the preventable deaths of more women.

This is part of a national attack on women.

The Republican-dominated Supreme Court of the United States has opted not to intervene, effectively reversing Roe v. Wade in Texas and opening it to reversal elsewhere. But this is ‘settled law,’ as Justice Brett Kavanaugh claimed at his 2018 nomination hearing, before flip-flopping earlier this month. And, the risk of other conservative states using the legal loophole Texas is exploiting is real. Make no mistake: this is an attempt to reverse Roe and nothing short of an attack on women and our rights.

But, the Texas abortion law isn’t the first threat to abortion access. Since Justice Kavanaugh’s appointment, the Supreme Court agreed to hear a case known as June Medical, which illustrated that reliance on courts and precedent alone is not enough, legislative interventions are also needed to protect our rights.

Meanwhile, in stark contrast, Mexico’s Supreme Court -- in a heavily Roman Catholic country -- has ruled that criminal penalties for abortion are unconstitutional.

With the worst maternal mortality rates in the nation, how can there be legislators in the United States out there claiming to be “pro life” as they exacerbate this crisis?

As the new Chair of the Task Force on Women’s Issues in the New York State Assembly and a Black woman who has faced pregnancy-related death, I am committed to reversing this cycle of morbidity for all women. I’m focused on ensuring that Black pregnant women aren’t dying at an alarming rate well above the national average and that all women have the right and access to abortion care.

In the New York Legislature, I passed a bill requiring hospitals to treat women in preterm labor. I’ve introduced several bills to expand testing for conditions like the one I had, barbarically termed an “incompetent cervix,” which are known to lead to preterm labor.

Several of my colleagues have also taken steps to address the significant racial disparity of Black women dying at a higher rate. New York City Council Member Vanessa Gibson announced more than $400,000 in Council funding to combat high rates of infant and maternal mortality in the Bronx.

If our nation had equitable health care and defended women’s rights on par with that of other developed nations, we could prevent the loss of life without controversy. We could let women and their doctors make choices that are best for them, and we could save lives.

We need to fight to preserve the lives of women who are facing increasingly worse odds in labor and the delivery room. Governor Kathy Hochul, in response to Texas’ backwards law, announced that New York will implement a public information campaign to affirm abortion rights, curb the spread of misinformation, and make abortion care more accessible via telehealth.

And as the first woman to lead the Brooklyn Democratic Party, I’m calling on Democrats from across the nation to hold Republicans accountable for stripping away our rights and causing the senseless deaths of women and their children.

***
Rodneyse Bichotte Hermelyn is the New York State Assemblymember for the 42nd District in Brooklyn and the first woman to chair the Brooklyn Democratic Party. She is Chair of the Assembly’s Task Force on Women’s Issues and Task Force on Minority- and Women-Owned Businesses. She sponsored the Jonah Bichotte Cowan law and now sponsors two bills -- A8048 and A7741 -- related to prenatal testing. On Twitter @AMBichotte.