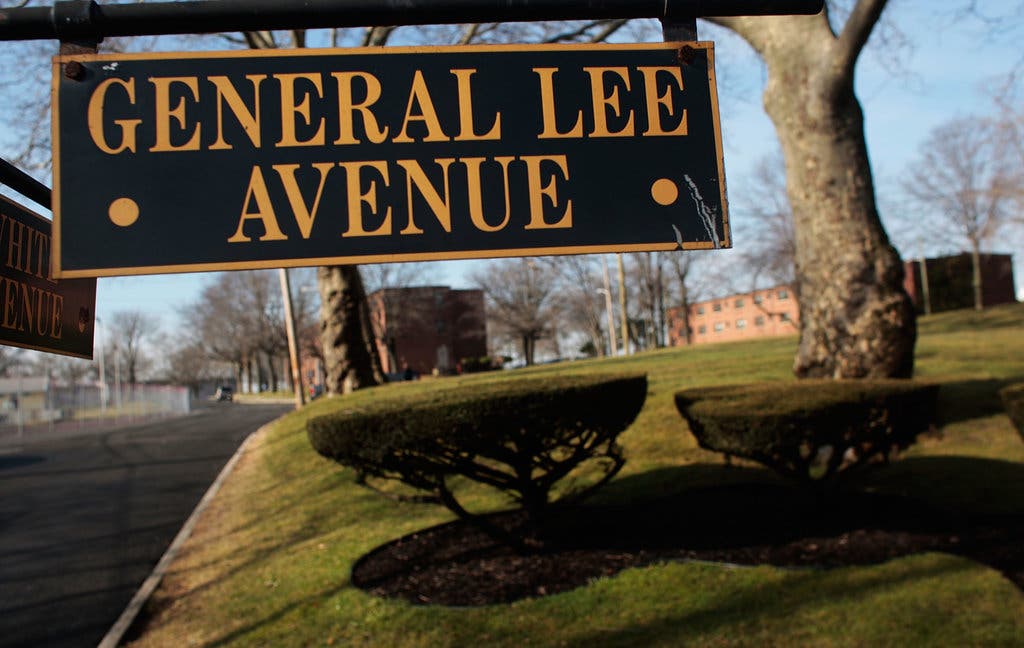 Every Soldier, Sailor, Marine, and Airman from New York City and Long Island conducts their enlistment at the Military Entrance Processing Station (MEPS) on Fort Hamilton Army Base, located on the southeast coast of Brooklyn. Many recruits show up to Fort Hamilton unaware of the fact that the main drag on the base is named after confederate General Robert E. Lee.

As if it weren’t embarrassing enough that a street on Fort Hamilton was named after the General in Chief of confederate forces in the Civil War, the MEPS facility is located on the corner of General Lee and White Avenue.

The central problem is two-fold: not only are Confederate leaders overrepresented on military bases (since, ostensibly, there aren’t any confederates left), but people of color are underrepresented in the names of bases across the country. The military should not only be a place where service members are free from systemic racism, but also a place where the people honored on bases — including their avenues — should reflect the backgrounds of the service members themselves. The time for us to rename Brooklyn’s General Lee Avenue is now.

We can only speculate about the mindset of the people who decided to place New York’s gateway to the military on what is likely the most racist-sounding intersection in the five boroughs. What we are left with are the reactions of recruits of all races who pass through the intersection on a daily basis. I witnessed these reactions first hand as a recruiter in the U.S. Army from 2014 to 2018.

Idling cars with government licence plates fill the MEPS parking lot before sunrise on a typical day there. Recruits eventually line up to prepare for a day filled with paperwork and physical examinations to ensure that they are fit for duty. Occasionally, one of these queued volunteers will ask their recruiter about the street sign at the intersection closest to MEPS.

Most of the curious recruits — many of whom are Black — pause to contemplate the situation, followed by the common refrain of “that’s messed up.” Some will shake their heads with furrowed brows, completely at a loss for words as they stare at the posted name of General Lee.

Black veterans, who have more liberty to speak their minds once outside the ranks, have called Confederate memorials a “slap in the face” that “contribute to lower performance.”

I used to explain to my recruits that Lee had been stationed at Fort Hamilton during his days as a Captain in the Union Army. Lee served there in the 1840s as an engineer, long before his defection to the confederacy.

The recruits’ outward disgust would eventually dissipate as they turned their focus to the enlistment process. To this day, I wonder how many of these recruits internalized their frustration about Lee and White. Their reactions are completely valid, of course. The Army was choosing respect for white-supremacist rebels over respect for the dignity of service members of color, not to mention all those who fought for the Union in the Civil War and their loved ones.

The street names at that intersection are particularly insensitive to Black servicemembers, who are overrepresented within the military’s ranks compared to the general population. Black men are 60% more represented in the U.S. Military than their white counterparts, according to a report by the Brookings Institution. That same report shows that the 22-million-plus Black women in the United States are over three times as likely to serve in the Armed Forces as white women. And the U.S. Census Bureau estimates that 24.3% of New York City residents are Black.

Confederate symbols garnered increased scrutiny in 2015 after a white supremacist murdered nine congregants of the Emanuel African Methodist Episcopal Church in Charleston, South Carolina. For a time, opponents of Confederate memorials had to contend with President Donald Trump, who actively defended such memorials in the name of “history and culture.”

While a plaque commemorating a tree planted by Robert E. Lee was removed from an off-post church near Fort Hamilton in 2017, General Lee Avenue kept its name. It turned out that changing the road’s name would literally require an act of Congress.

But Congress did eventually take action on this issue. Section 370 of the 2021 National Defense Authorization Act established a “commission on the naming of items of the Department of Defense that commemorate the Confederate States of America or any person who served voluntarily with the Confederate States of America,” which is commonly referred to as the “Naming Commission.”

The bipartisan commission is tasked with working with local communities to “develop a plan to remove names, symbols, displays, monuments, or paraphernalia that commemorate the Confederate States of America.”

The Naming Commission is currently working on renaming military bases, collaborating with neighboring communities to come up with replacement names for bases such as Fort Bragg in North Carolina and Fort Rucker in Alabama. But the commission’s initial focus is on nine bases in the South, according to commission chair and retired Navy Admiral Michelle Howard.

Influential officials in New York, such as Mayor Bill de Blasio and Mayor-elect Eric Adams, must immediately reach out to Adm. Howard to ensure that Fort Hamilton is up for review when the commission expands its proceedings. A successful renaming campaign would be an easy win for any elected official who takes it on, or, as we say in the military, “free chicken.”

Finding a replacement name for General Lee Avenue should involve community input, much like the renaming proceedings that are occurring across the nation this year. The list of Medal of Honor recipients connected to New York provides plenty of potential candidates to replace Lee. Whatever name the commission settles on, it will undoubtedly give new recruits the honorable welcome to the U.S. military that they deserve.

***
Stephen Bragale is a U.S. Army veteran and an undergraduate student at Fordham University, majoring in English and Political Science.