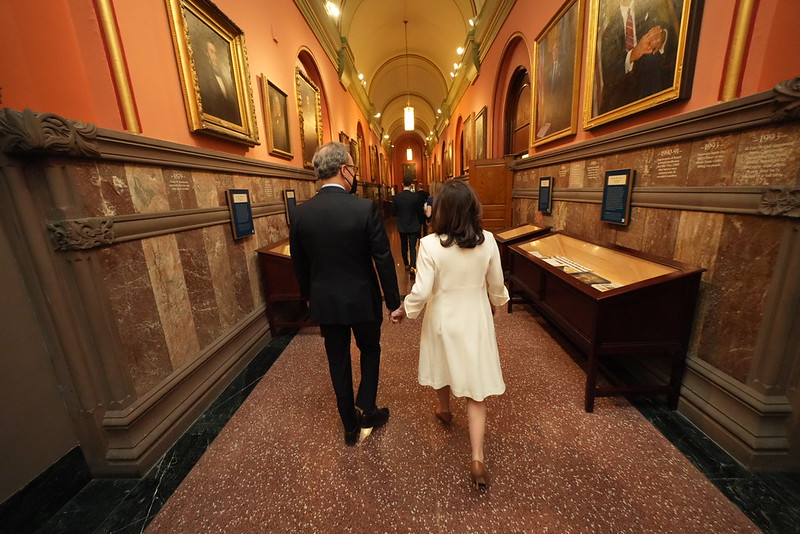 Gov. Hochul in the Hall of Governors (photo: governor's office of Kathy Hocul)

Governor Kathy Hochul’s recent State of the State address promised a new era of political collaboration and offered a sweeping agenda to improve the state. “We will share success,” she promised. “We will find common ground. We will restore trust in this government.”

At the same time, she exhibited a personal modesty that set her apart from her predecessor, Andrew Cuomo. “I didn’t come here to make history,” she said. “I came to make a difference.”

As historian Allan Nevins wrote, "to be governor of New York…was to occupy a position which might be distinguished or unimportant, according to the man who held it." Governor Hochul may not have come to Albany to make history but she has already done so just by being the first woman to hold that position and by restoring decorum and public confidence in the Executive Chamber.

“I have a deep reverence for our state’s remarkable past,” she said in her address. There may be some helpful insights from that remarkable past, particularly the strategies of New York’s strongest previous governors, that she could find helpful.

Define An Expansive Vision
Great governors offer dramatic visions for their state and proceed to make them real. Gov. DeWitt Clinton (1817-23, 1825-27) championed constructing the Erie Canal, from Troy to Buffalo, the nation's most important public works project in the 19th century. The canal was a dramatic success that propelled New York City and State to national preeminence. Clinton was a visionary (foreseeing the canal as an engine for growth), advocate (crafting appeals to bring together "communities of interest": agriculture, commerce and manufacturing) and leader (negotiating approval from a factious legislature).

He was also a shrewd administrator. He worked out financing to build the canal entirely from state resources, particularly bonds.  He realized that either starting at the Hudson River in Troy and building westward, or at Lake Erie at Buffalo and building eastward, might mean that the canal stopped mid-state if resources or public support waned, Clinton shrewdly began construction at Rome in 1817. That was near the middle of the state where costs were lowest. Building both east and west, toward the Hudson and Lake Erie, encouraged continued statewide legislative and public support until the enterprise was completed in 1825.

Hochul’s speech provided her take on New York’s inspirational historical greatness. “While we may be imperfect, New Yorkers have always been the risk-takers, entrepreneurs, the innovators, the builders, the immigrants, the students, the true believers and the dreamers who know that there truly is only one New York”

Demonstrate Highly-Visible Personal Leadership
George Clinton, New York's first and longest-tenured governor (1777-95, 1801-04), set the tone for taking bold action when models were lacking. Clinton, a patriot general fighting the British when he was elected, expressed determination in his first speech to be a strong governor and to  "exercise for the advantage of the people the powers with which they have invested me." That set the tone for the history of executive leadership in New York.

After his inauguration, Governor Clinton resumed command of patriot troops fighting in the Hudson Valley. As his military duties eased, he turned full-time to the precedent-setting work as governor. He set up state government, established New York's first system of taxation and fiscal management, and supported public education and the building of roads and early canals.

In 1786, the governor personally commanded state militia troops to confront an armed anti-tax uprising that had started in Massachusetts and threatened to spread into New York. Two years later, he led the militia in suppressing a riot in New York City. The governor, on the front lines, was injured when a rioter threw a rock.

Gov. Franklin D. Roosevelt (1929-1933), alarmed by rising unemployment during the Great Depression after the Stock Market “crash” of 1929, called the legislature into emergency session in August 1931. “New York cannot wait,” he warned in a dramatic address to the lawmakers. “You face… the problem of providing immediate relief."

He proposed a Temporary Emergency Relief Administration (TERA), its name strategically selected to connote urgency but also impermanence. This strategy addressed the need for immediate action but also disarmed critics who accused Roosevelt of pushing New York into a permanent welfare state mode.

FDR skillfully outmaneuvered his Republican opponents in the legislature by threatening to veto their weak alternative proposal and blame them for inaction. The opposition folded and the TERA bill passed. The new agency improvised and succeeded, and became a model for similar New Deal recovery and relief agencies when Roosevelt became president in 1933. As federal programs ramped up, the need for the state program diminished and, true to FDR’s promise, TERA expired in 1937.

Hochul already has FDR in mind as a model. “First as governor and then as president, FDR literally rebuilt the economy from the ground up after the crash of 1929,” she said in her inaugural address. “More than giving people jobs, he gave people hope.”

Blend Short-Term Wins With Long-Term Impact
Governor Theodore Roosevelt (1899-1901) is a good model of executive energy (he often walked briskly several blocks from the Executive Mansion and bounded up the Capitol steps two at a time); openness (twice-daily candid interviews with reporters); and pragmatic compromise (keeping the public interest paramount but dealing with the political reality of political parties dominated by bosses). U.S. Senator Thomas Platt, the de facto head of the state Republican Party, later recalled that TR had promised to consult him on policy and appointments. “He religiously fulfilled this pledge,” said Platt, “although he frequently did just what he pleased.”

Roosevelt chalked up some impressive short-term achievements. He persuaded the legislature to pass a law to tax business franchises despite opposition from within his own Republican Party. TR was the first governor to issue an order mandating the cleanup of a waterway. He also left a long-term legacy. A commission he appointed recommended abandoning the by-then-aging Erie Canal in favor of a modern, new Barge Canal, finally achieved in 1903 (and still in operation today). Another commission recommended consolidation of scattered state education policy in a new State Education Department. TR endorsed it but political bickering delayed implementation until 1904.

"New York faces the problem of fitting the aspirations of public service into the reduced limits of its treasury," said Governor Herbert Lehman (1933-42) during his first inaugural address, in the depths of the Great Depression. He had inherited a $106 million state deficit. Lehman got a fiscal break. As the Depression waned and military spending at the beginning of World War II ramped up, state tax revenues increased. Lehman made the most of public resources. He was a skilled administrator who dramatically expanded social programs, unemployment, and other areas. He left the state with an $80 million surplus in 1942.

These examples suggest that successful New York governors are strong leaders, visionary but also pragmatic, idealists but also political realists, flexible but also principled and steadfast. Hochul should find that their strategies and tactics are worthy of consideration as she forges ahead with her governorship.

***
Bruce W. Dearstyne is a historian in Albany, NY. SUNY Press is publishing the second edition of his book  The Spirit of New York: Defining Events in the Empire State’s History and his new book The Crucible of Public Policy: New York Courts in the Progressive Era later this year.