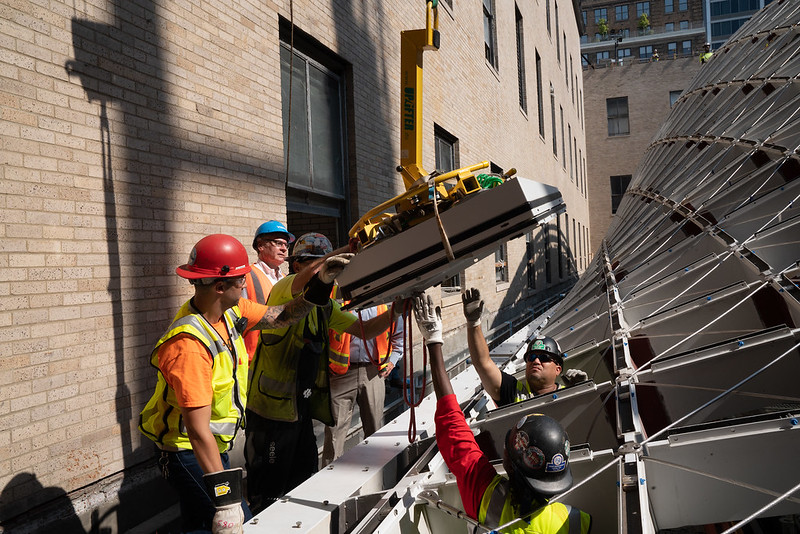 In 2019, New York passed one of the strongest climate bills in the country, the Climate Leadership and Community Protection Act.

The CLCPA requires nothing less than a total transformation of our economy. Our state must reach net-zero emissions by 2050, and between now and then we must rapidly increase renewable energy production and decrease fossil fuel pollution. Critically, the law also requires that 35-40% of state climate and energy spending be directed to communities on the frontlines of the climate crisis — a nation-leading environmental justice requirement that has been copied by other lawmakers and even the Biden administration.

All of this is great news for New York. But fully transforming our economy, investing in frontline communities, and meeting the mandates of the CLCPA aren’t free, and three years later, we’re still waiting for the money to show up in our communities. That’s why my organization, the New York City Environmental Justice Alliance, is part of a coalition supporting a $15 billion climate, jobs, and justice fund in the next New York State budget, due by April 1.

$15 billion is the bare minimum of what we need to meet our climate goals and invest in frontline communities. It’s just 7% of Governor Hochul’s proposed $216 billion budget — a small price to pay to address one of the biggest crises of our time while taking advantage of it to create jobs, particularly in vulnerable and disadvantaged communities. NYSERDA, a state authority under Governor Hochul’s administration, said meeting the mandates of the CLCPA will take $10 billion per year to start, with the amount increasing over time. The same report also found that reducing greenhouse gas emissions in line with the CLCPA avoids $260 billion in economic impacts of damages caused by climate change.

Making these investments is fundamentally an issue of racial and economic justice. Climate catastrophe and fossil fuel pollution are coming for us all, but for Black, brown, immigrant, and low-income communities, disaster has already arrived. The communities represented by NYC-EJA’s member organizations, from Sunset Park to the South Bronx, are breathing in toxic levels of pollution from peaker power plants, trucking facilities, waste transfer stations, and highways. They are flooded during increasingly severe superstorms and hurricanes, which leave behind disease-causing mold and mildew even after the streets dry out and the skies clear up. As summers get hotter and hotter, people in environmental justice communities suffer disproportionately from heat stroke and related illnesses, because our neighborhoods lack the infrastructure to keep cool.

It’s not random that communities of color suffer the worst impacts of pollution and climate change; it’s by design. Burning fossil fuels, and allowing the seas to rise, temperatures to increase, and storms to worsen requires that some people will suffer the consequences. In a country built on the marginalization and subjugation of people of color, it is unfortunately no surprise that our communities continue to be offered up as sacrifice zones by people in power.

This $15 billion climate, job, and justice fund can begin to remedy these injustices and build a just, thriving future for all New Yorkers. The money would put our state on a path to replace pollution-causing fossil fuels with renewable energy, solarize and retrofit public schools and housing, and make mass transit greener and more reliable, especially for communities on the margins. It would create hundreds of thousands of good-paying jobs for our communities. In fact, if we keep the investments up, we could see 150,000 good, green jobs created over the next ten years.

The fund would also provide a “climate stimulus” to low-income and working New Yorkers. These climate stimulus payments would include transit vouchers to encourage riding the bus and train, grants for homeowners to make their houses more energy-efficient, and credits to reduce the cost of heating homes and small businesses in the winter. We don’t have to choose between prosperity for all and a renewable future: we can have both.

One of the most exciting components of the $15 billion climate, jobs, and justice fund is that it will provide grants to local organizations in frontline communities for programs that improve resiliency, increase energy efficiency, and decrease fossil fuel pollution. Frontline communities are already leading the way in creating climate solutions, but we need the Governor and Legislature to make sure we get the funding we need.

Or look to the South Bronx. The POINT CDC has created a “Be a Buddy” program, which connects volunteers with seniors and other vulnerable people in the community to check in during heat waves, storms, or other climate events. With money from the $15 billion climate, jobs, and justice fund, we could see programs like this expand and bloom across the state.

What we can’t afford to do is wait. The climate crisis is happening now, and people on the frontlines deserve real funding behind our climate solutions. It’s time for the Governor and Legislature to put their money where their mouth is, and follow through on making New York a real climate justice leader. Let’s invest $15 billion in climate, jobs, and justice this year.

***
Eddie Bautista is Executive Director of the NYC Environmental Justice Alliance and a member of the Steering Committee at NY Renews. On Twitter @eddiebautista08 & @NYCEJAlliance & @NYRenews.