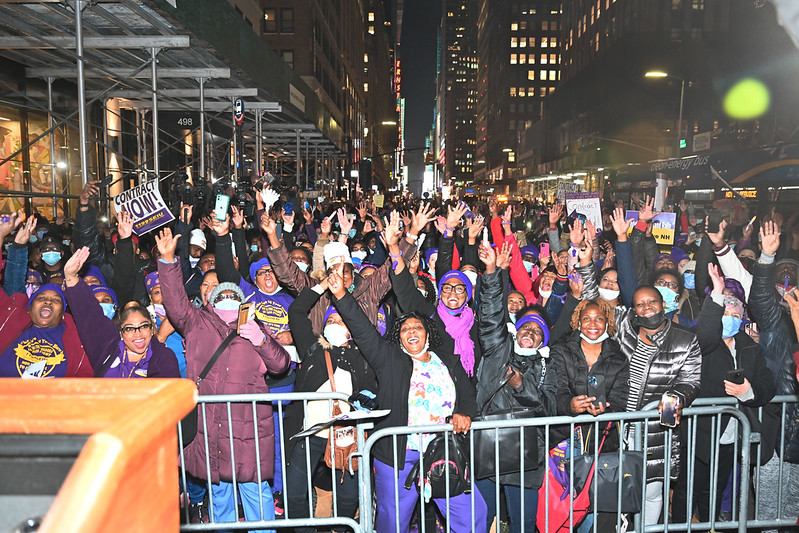 A labor rally (photo: Kevin P. Coughlin/Office of the Governor)

Throughout the pandemic, our nation’s essential workers risked their lives and that of their families to fuel our economy and keep us safe. Yet, as they did so, they received inadequate pay and were often left out of the process of crafting policies supposedly intended to protect them. All the while, , and executive compensation skyrocket. It’s no wonder record numbers of workers are rising up, taking action, and demanding change.

Every day we are inspired by stories of working people using organized bargaining power to establish true economic democracy. What we’ve witnessed from millions of workers is a recognition that if they want to achieve a better path, they can create change through collective actions and demand a seat at the table. No longer must they passively wait on politicians to change the laws or craft the perfect strategies. People are organizing, speaking out on their shared experiences and struggles, and despite the odds, winning basic protections and benefits in the workplace all across America in 2022, from Amazon to Starbucks to REI and The New York Times.

It is especially gratifying to see a whole new generation of women and workers of color and others for whom the COVID-19 era has been disproportionately painful leading the way. Undoubtedly, Black, Latino, and other workers of color bring a novel perspective to building worker power and what labor organizing could look like in the future. They’re also suggesting ways to evolve collective bargaining to match the needs of modern people — not only changing their wages and working conditions but also addressing discrimination and improving the health of our democracy.

For far too long, America’s labor movement and workers’ rights have fallen victim to relentless attacks and successful divide-and-conquer strategies from corporations, right-wing politicians, and other powerful institutions, including the media, which have largely concealed what was happening. The result has been extreme income inequality, with Americans working longer hours than ever before in unsafe conditions and feeling little social mobility.

It’s no wonder working people are angry — they’re tired of waiting for a better future that may never arrive, especially after sacrificing so much during the pandemic over the past two years. Also noteworthy is that workers’ increased activism and high-profile victories come amid record-low unemployment and public support for labor unions, reaching 68%, the highest level in more than five decades. Not that any of this translates to corporations – like Amazon, Starbucks, Target, Google, and Apple – suddenly respecting workers’ rights to organize, negotiating in good faith, and improving working conditions.

For as long as we can remember, institutions have trained working people and communities of color, in particular, to think we have no future to believe in, so why even try. The recently leaked U.S. Supreme Court draft opinion on abortion rights offers a glimpse into the future that our opposition has in store. Overturning Roe v. Wade would be the most egregious assault on women’s rights and equality, access to health care, and right to privacy in modern history – erasing decades of economic gains. Such a ruling would be especially devastating for poor and working-class women, a disproportionate number of whom are Black, Latino, and Asian.

After being bombarded for so long with so much bad news, it’s a wonder any of us get out of bed in the morning. But action is the oxygen that fuels social movements, and we descend from those who knew that “only when it’s dark enough can you see the stars.”

Amazon Labor Union leaders Chris Smalls, Michelle Valentin Nieves, and Angelika Maldonado didn’t just give up amid arrests and the onslaught of attacks from the company. They organized a union and won. Jennifer Bates, Isaiah Thomas,  and other bullied Amazon workers in Bessemer, Alabama – whose activism and bravery inspired so many others to take action – didn’t give up after the company undermined democracy in their union election. They came back and won more votes in a race that remains “too close to call.” The women leading the drive to successfully unionize Starbucks across the country (at 40 stores and counting) didn’t give up, and neither will we.

We urge elected officials and anyone else hand-wringing about the upcoming elections to follow workers’ lead, mobilizing like never before to protect our sacred freedoms up and down the ballot. Instead of succumbing to fear of a world where right-wing extremists control Congress and every statehouse and governorship in America, let’s put our energy toward creating a future where our democracy can thrive.