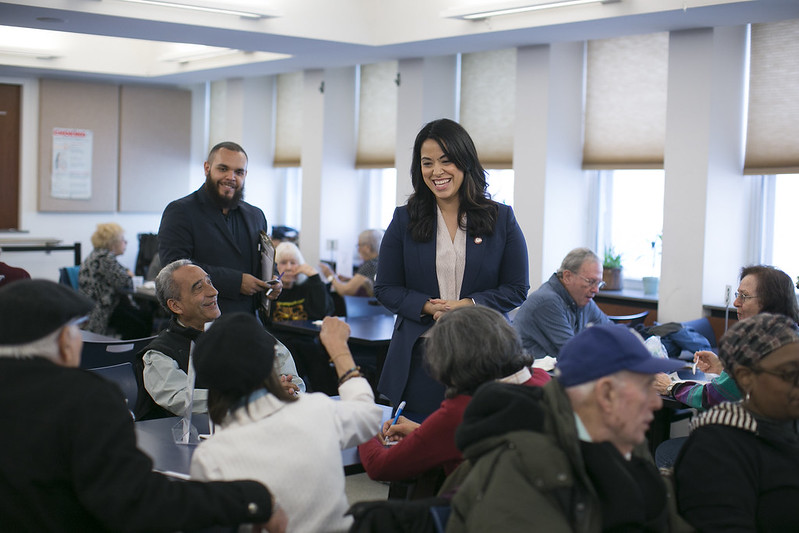 If you grew up on the Lower East Side during the ‘80s, ‘90s, or 2000s you probably remember Lucky Variety Store. Run by a Chinese family from the neighborhood, Lucky was beloved by local kids, selling backpacks, stickers, costumes, and custom nameplate belt buckles (not to mention throwing stars). When Lucky closed in 2010, a common response was “There goes the neighborhood.”

Many neighborhoods around the city have a version of this story from the last few years: an iconic business closed, years of memories gone with it, and a sinking feeling that the community you call home is changing beneath your feet. As a lifelong Lower East Sider born in Bellevue Hospital and raised on Stanton Street, I can tell you that while my neighborhood has changed, it is still very much there, because – in addition to the businesses and homes that have withstood gentrification – the community is still there. Communities, both on the Lower East Side and across New York City, are what I’ve spent my career working to strengthen and preserve – and I’ll keep doing it as the representative for New York’s new 10th Congressional District.

I spent my childhood with my mom and sister in a Section 8 apartment between Pitt and Ridge. Even as a child, I could see the neglect of our building and our neighborhood. But the families who lived there – most of them Latino or Black or Chinese, along with a smattering of Jewish and Italian residents – were deeply committed to taking care of one other.

Growing up, our building felt like a little village. Everybody knew everybody else. People kept their doors propped open as they cooked, so the hallways smelled amazing – like simmering cabbage, rice, and beans. Neighbors doled out tips on how to be more economical about this or that; if someone noticed a teenager dragging a bag of laundry down the hall, they weren’t shy about making sure the kid knew exactly how to get the wash done properly. To help save money on necessities, people pooled their money for bulk shopping trips. On Easter, my family would head to a neighbor’s to bake a box cake and celebrate together.

That feeling of community extended to life outside the building, in ways big and small.

My mom often didn’t have enough money for a Christmas tree, but that never meant that we didn’t have Christmas. My whole family would go to my great-grandmother’s apartment in the projects in Bushwick for nochebuena — which, if you know about nochebuena, you know it’s a fun night. We’d have one present for everyone, enough food for all of us, and, most importantly, the comfort that came with being together.

As a kid, I made a habit of walking down Rivington to the matzo factory Streit’s, where the bakers would hand out free pieces of fresh matzo through the windows. Like a lot of places, Streit’s is gone now, but so much of the neighborhood remains exactly as it was growing up. I love walking by the same courts where I spent 10 summers playing basketball; Hamilton Fish Park on the east side and Carmine Street Pool on the west, our go to spots for a swim and cool-off in the hot city summers; and Our Lady of Sorrows Church, with a giant Virgin Mary statue that greeted me every time I walked out of my childhood home. My grandparents lived in Brooklyn, so growing up also meant Sunday matinees at Cobble Hill Theater, bowling with our family at Melody Lanes in Sunset Park, and shopping at what was A&S and is now the Macy’s on Fulton in Downtown Brooklyn. After a day spent in Brooklyn with my grandparents I’d come home to the Lower East Side, back to the family and friends that made New York such an amazing place to grow up. I deeply miss the businesses that have closed and the people who have moved away, and I am profoundly grateful that so much of the New York of my childhood is still here today.

I can still pop into Casa Adela on Avenue C, where several generations of the same family have been serving Puerto Rican food for 46 years, with the same salsa music playing and the TV perpetually tuned to either telenovelas or NY1. Casa Adela is also in the midst of a fraught negotiation with its building. The building, which is all affordable housing, is having trouble keeping up with capital costs; meanwhile, the restaurant can’t afford a rent hike. The board wants to keep Casa Adela, a cornerstone of the Lower East Side’s Puerto Rican culture and community, but it also has to cover its expenses.

It’s an example of a type of situation that’s been playing out in the neighborhoods of the 10th congressional district and across the city, in which so many are struggling to survive in an environment that has become less and less hospitable to working people. From Sunset Park to Alphabet City, from Park Slope to the West Village, and from DUMBO to Chinatown, rents are up, local businesses are struggling, and residents aren’t sure what the future holds. As NY-10’s representative in Congress, I’ll prioritize policies that provide real opportunities for those who have served as the backbone of their communities for generations to have a sustainable future in New York.

Taking care of the New York I love, and the New York that raised me, means listening to and fighting for the communities that need help the most. That’s something that became especially clear to me while working on my first community campaign, the development of Essex Crossing in what was known as the Seward Park Urban Renewal Area – a huge swath of land by the Williamsburg Bridge that had been sitting empty for over four decades.

I came to the campaign almost by accident. After several years of working as a camp counselor and in after-school programs, I got laid off, so I had some time on my hands. Marie Christoper – my childhood building’s tenant leader, who was always dragging me and my mom to tenant association meetings, precinct meetings, community board meetings – encouraged me to volunteer at Good Old Lower East Side, a housing organization that’s been around since 1977. Through GOLES, I learned that the Seward Park Urban Renewal Area had once been occupied by tenant buildings where nearly 2,000 families lived, most of them Puerto Rican. Those residents were all displaced in the late ‘60s and early ‘70s, when the buildings were razed as part of Robert Moses’ “slum clearing” initiative.

I started out by testifying before the community board about the importance of ensuring that the Essex Crossing development would do the right thing by the neighborhood and the people who’d been pushed out. Eventually, I joined the community board – just in time to vote on the first step of the land use process to approve Essex Crossing. While we didn’t get everything we wanted, we did get everything that, by listening to community members, we determined was essential, including a seamless transition and affordable rents for the vendors at the Essex Street Market, a park, and affordable housing for low-income people and seniors.

Perhaps most notably, we secured a right of return for the families who’d lost their homes decades ago; people who could prove they’d lived in the demolished buildings were given priority for subsidized units in Essex Crossing. It wasn’t until I read an article about the returning tenants that I realized that my own father and aunt were among them.

There’s a great Dominican restaurant called El Castillo de Jagua that’s had the same delivery guy for 30 years – he watched me, my sister, and our friends all grow up. But because I was just around the corner, I’d always gotten pick-up. A couple years ago I came down with a cold so bad that I decided to order in. Still, when the delivery guy arrived, I felt embarrassed for not making the short trip myself. I tried to apologize but he cut me off: “I’ll bring you soup any time.”

Sure, this man was just doing his job – but he was also demonstrating the practical sense of care that has been one of the defining elements of my life in New York. It’s something that I’ve always brought to my work representing the 2nd City Council District, and I’ll bring the same thing to Congress.

The reality is that just about every Democrat in the NY-10 race has similar perspectives on major national issues such as codifying Roe v. Wade, increasing gun control, and protecting voting rights — but New Yorkers rightly expect their congressional representatives to do a lot on the local level. I have a comprehensive understanding of what it would mean to really deliver for my district, especially when it comes to the systems that New Yorkers rely on to stay afloat, like the MTA, public hospitals, and housing. The member of congress in charge of bringing back federal transit dollars for the Brooklyn, Manhattan, and Williamsburg Bridges, the Holland and Carey Tunnels, and the transit hubs at Atlantic Terminal and the World Trade Center needs to be someone who uses them regularly, just like the people who live in these neighborhoods.

I grew up in a community where most people weren’t able to imagine much for themselves beyond their next paycheck; I’ve lived that way myself. I want to bring as much money into the district as possible so that we can tackle the systemic inequities that prevent so many New Yorkers and communities from having the stability and resources required to create the lives they deserve.

This district is my home. It’s where I’ve experienced every major milestone in my life, from winning basketball games and celebrating graduations to meeting my husband on the community board (yes, really) and eventually spending one of our first dates walking the Brooklyn Heights promenade.

You’ll see that care reflected in everything I do in Congress. That means identifying with and advocating for the specific needs of the people of the 10th district. It also means being willing to work with people who might not reflect the same makeup of my district or share all of my views, but whose constituents face challenges similar to mine, with the goal of producing results that will benefit NY-10 over the long-term.

A common rallying cry among Latinos is the phrase “pa’lante siempre,” onward always. We say it in times of both progress and struggle, to remind ourselves that it’s our communities that get us through whatever we face — and that no matter what, we face it together.

I’m running for Congress to help build a future that every New Yorker can see themselves in, to continue delivering for the communities that raised me, and to represent this newly drawn district with homegrown pride. New Yorkers are known for our toughness, but everyone in this city knows how much we care for each other, and how much we care about our neighborhoods. My simple promise, one which has served me well in the City Council, is to care fiercely and unapologetically, to put communities and people first, and to protect the future of New York and its neighborhoods. No act of Congress can bring back Lucky Variety Store, but a devoted and determined representative can protect our neighborhoods and residents while creating a future we shape ourselves.

Onward, always. The future of the city we love is ours to build together.

***
Carlina Rivera is a Democratic candidate for Congress in NY-10 and a New York City Council Member for the 2nd Council District. On Twitter @CarlinaRivera.