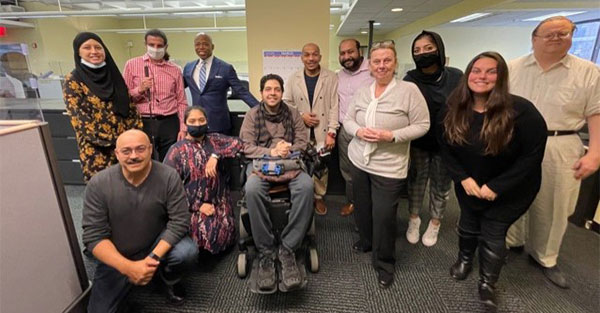 The opportunity stems from three simultaneous dynamics: a low unemployment rate nationally; a high unemployment rate for people with disabilities in New York City; and more flexible working arrangements as a result of the remote working necessitated by the COVID-19 pandemic.

According to a recent report by Center for an Urban Future, nearly 17% of New Yorkers of working age with a disability were unemployed in 2021 – up from 7.4% in 2019. “This disastrously high unemployment rate has persisted for much of the past two years,” the report states, “even as the unemployment rate for New Yorkers without a disability has fallen sharply since the summer of 2020.”

The growing demand for workers, coupled with more flexible working conditions, creates a fertile environment. But preparing people with disabilities to meet the demand often requires training – and, in the case of high-school-age youth – pre-training.

We know that reality well, as we run a nonprofit organization, the Institute for Career Development (ICD), that trains and pre-trains people with disabilities in New York City for career opportunities.

The training covers a broad range of jobs in such areas as building repair, custodial services, human services, retail, and information technology. ICD’s IT Academy, for instance, offers the first fully-accessible certification-based technology training programs for New Yorkers with disabilities.

The challenge, however, is that public investments in career development for people with disabilities are declining even as the opportunity grows. As the report by Center for an Urban Future reveals, New York City funding for programs serving New Yorkers with intellectual and developmental disabilities has plunged 82% over the past two decades, from $70.7 million to $12.6 million.

What New York City needs is a robust pipeline to expand the number of individuals with disabilities in the workforce. That pipeline should have three key components.

Pre-training is needed to support youth who might otherwise fall through the cracks between schooling and career development. Research recently conducted for the Institute for Career Development by the nonprofit consulting firm The Bridgespan Group identified a significant gap in serving people with disabilities in New York City. That gap is in the transition from school to career, during which school-based support ends and career opportunities – as distinct from job opportunities – have not yet arisen. Filling that gap through pre-training would substantially enhance career opportunities earlier in life.

The federal government, for instance, has a 7% goal for hiring individuals with disabilities. The City of New York should provide incentives to underscore its commitment as well.

***
Diosdado G. Gica and Joseph T. McDonald III are Co-Presidents of the Institute for Career Development, based in New York City.