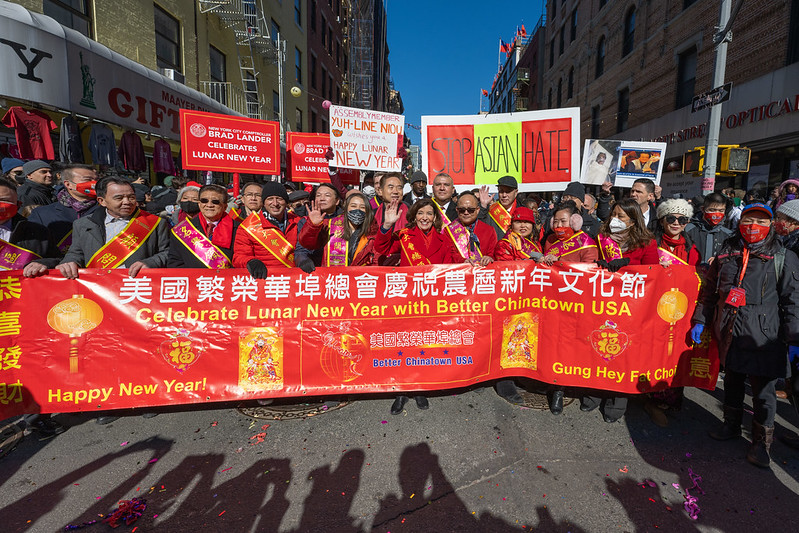 No one said it better than Congresswoman Grace Meng when, after the 2021 elections, she tweeted of Democrats, “our party better start giving more of a shit about #aapi [Asian-American and Pacific Islander] voters and communities. No other community turned out at a faster pace than AAPIs in 2020.”

Meng, the first Asian American elected to Congress from New York, was reacting to significant swings by Asian-American voters toward Republicans in the 2021 mayoral and other city elections. Even districts represented by an Asian Democrat, such as that of Queens Assemblymember Ron Kim, saw the shift.

In New York City alone, Asian Americans now make up 17.3% of the population, and New York State’s Asian population grew over 37.6% in the past decade. As reported by Asian American Federation, Asian voters also turned out in a record high (27.1%) in this past citywide election surpassing Black (26.5%) and Hispanic (17.4%) voter turnout. This is an 11-point increase from 2013, when Asian voters only turned out at 16.3%.

And while those who organize in Asian communities are well aware of this shift in voter turnout and power, it feels as if those in national and especially New York City politics are resisting fully recognizing this paradigm shift and failing to invest in Asian candidates and outreach strategies for this growing electorate.

This comes at a grave cost to the progressive and Democratic ability to foster what will become a new political force. To be a progressive Asian in New York City politics feels like being a canary in a coal mine right now: recognizing that there’s a window to capture AAPI voters but seeing Democratic Party leaders and other electeds miss the mark repeatedly. This is especially the case as a voter in the new 10th Congressional District of New York, which was drawn to include both of the city’s Chinatowns, in Lower Manhattan and Sunset Park.

It is paramount that with this new and open congressional seat, Democrats seize the opportunity to place an Asian American elected official with a strong record as an advocate at the top of political power for these under-served Asian-American communities. Right now, Meng is the only Asian in the New York congressional delegation and based on representative demographics alone, New York State should have at least two Asians as members of Congress.

Especially given how long elected officials often hold congressional seats, there might not be another window of time more critical than now for Asian voters. It’s why Democrats and the media cannot ignore Yuh-Line Niou and her campaign as the only viable Asian candidate in the NY-10 race.

While NY-10 unites both Chinatowns, Brooklyn’s quickly growing Chinatown, located in central Sunset Park, is on a different political trajectory than its Manhattan counterpart. Whereas Manhattan’s Chinatown overwhelmingly went for Democrat Eric Adams in the general election, Brooklyn’s Chinatown actually voted for Republican Curtis Sliwa over Adams. In fact, outside of Manhattan, Sliwa performed better in majority-Asian districts, especially in Brooklyn and Queens.

Even in the City Council race in Sunset Park and Red Hook, while Alexa Aviles won easily with both labor and progressive support, the runner-up was political newcomer Yu Lin, who won close to 35% of the vote. He was virtually unknown before his political campaign, and while rumblings in Chinatown showed many Asian community leaders were aware of his apparent lack of political education or acumen, he ran a pro-police, pro-safety, and pro-Asian messaging campaign to secure supporters and was backed by conservative business leaders in the neighborhood.

In February, Republican Reps. Nicole Malliotakis and Lee Zeldin, the GOP nominee for Governor in this year’s election, held a public safety rally in Sunset Park that was well-attended by Asian residents. This came at a time when there was a massive spike in hate crimes against AAPI communities and especially women and seniors were injured or killed.

Granted, it is important to note that Asian Americans in New York City also overwhelmingly voted for Democrat Joe Biden over Republican incumbent Donald Trump in the 2020 election. But some of those very same areas voted Republican in the following mayoral race.

It’s important to acknowledge that the conservative energy in Asian communities in New York City has been fueled and amplified by elected officials who have deep ties to white supremacist movements, such as Malliotakis and Zeldin. Often, these views and rhetoric work to fracture Asian communities away from Black and Latino ones. There’s also a growing movement of business leaders and conservative bloggers, many with ties to real estate interests and China, who are smartly organizing to seize power on the right while there is an opening. Building through fear is expeditious and, oftentimes, easily exploitable.

In order to begin to turn the tide, it’s just not enough to have sympathetic elected officials show up once a year at Lunar New Year and attempt to pronounce Gong Xi Fa Cai or Gong Het Fat Choy, or to employ one or two dedicated Asian staffers. We need Democrats and progressives fully throwing down for Asian candidates, Asian voter outreach, language justice and accessibility, and ensuring that we’re testing messaging and framing for Asian voters.

Someone like Yuh-Line Niou, who has been working incredibly hard in the trenches for Manhattan’s Chinatown, especially during the worst of the covid crisis, and has the experience of building and supporting an Asian district, can build trust far more quickly than a non-Asian elected official.

Perhaps most importantly and impressively, Niou has been able to organize Asian youth, many who come from Sunset Park. Her campaign has been one that invites and excites young Asians who come from across the city to make calls, knock on doors, and hang up posters. As someone who was raised by a conservative father, it wasn’t his friends of 40-plus years who convinced him to vote Democrat, but his very stubborn and effusive daughter instead.

And as population growth and redistricting of legislative maps continue to create Asian-plurarity seats in Brooklyn (including new State Senate District 17, which will hopefully see progressive Iwen Chu successful this fall) and other parts of the city, it’s critical that we do that work now while there’s still a large window of opportunity. In NY-10, both Chinatowns would benefit with an Asian representative in Congress — and would be able to provide real backing and support in fostering Asian candidates from the community to run on Democratic and progressive ideals up and down the ballot.

Asian voters are by no means a lost cause for Democrats, they are untapped potential. APIAVote did a national survey showing that the majority of Asian voters do support many popular policies long-held by Democrats, including on gun control, affordable child care, paid leave, and even affirmative action. It will take invested organizing and resources for this to also reflect locally in New York City.

But showing up for Niou’s field shift in Sunset Park on a sunny Sunday afternoon and seeing over 20 young Asian volunteers, many second and third generation Americans like me, made me hopeful.

***
Whitney Hu is the political director of Churches United for Fair Housing Action and organizer in Sunset Park. She is Asian American and a NY-10 voter. On Twitter @whitney_hu.