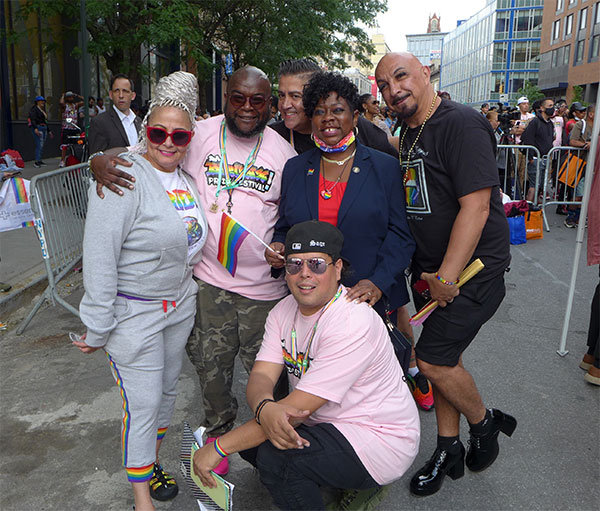 Visibility for the LGBTQ community is at an all-time high. Though this heightened exposure can lead to progress, there are also drawbacks – particularly when it comes to accurate representation of intersectional identities. When you think of LGBTQ leaders, who comes to mind? How many of them are Black?

It is important that, in addition to prominent white LGBTQ figures, the wider public is just as conscious of Black LGBTQ thought leaders who have the necessary lived experience to have exhaustive, informed discussions about various issues. To accurately represent and support the community when it comes to politics or public policy, we need to be strategic in appointing Black LGBTQ leaders to ensure they have a seat at the table.

While in the past few years some progress has been made for Black LGBTQ figures, many are still idolizing and positioning white LGBTQ folks as spokespeople for the entire community. This paints an inaccurate and harmful picture.

While it is demonstrably false, the misperception that the LGBTQ community has made more advancements than the Black community is very prevalent, particularly among Black people. The notion negates the intersection of being Black and LGBTQ, and the disparities that exist – disparities that are exacerbated when these two identities collide.

I understand where this image comes from – we picture a LGTBQ individual, perhaps a white gay man, who is celebrating Pride, enjoys equal rights to his straight counterparts in several areas around the country, and seems to live in abundance. This image, especially during June’s Pride Month, makes many in the Black community feel left behind as they watch another marginalized community advance and seemingly bypass them. While we have to be careful to not participate in the ‘Oppression Olympics,’ we have to have an open discussion about this reality.

To achieve legitimate and sustainable progress for Black and brown LGBTQ individuals, we need to uplift LGBTQ leaders who represent and embody the diversity and lived experiences of those who identify within the community. As a result of the over-representation of white gay cisgendered men and women as the leaders, outside perspectives are skewed and don’t recognize the many intersectionalities of identities. The failure to include Black and brown folks who are trans and gender non-conforming further perpetuates the silencing of these communities, who also face higher rates of violence being directed towards them.

The average life expectancy of a Black trans woman is 35 years. In 2021, at least 51 Black transgender people lost their lives to violence, which makes it the deadliest year on record. The average income for a Black trans person is $10,000, making it almost impossible to secure safe, affordable housing. Juxtapose this with the lack of visibility and stigma that still exist within the Black community around all things LGBTQ and we begin to see the full picture. Black trans/GNC folks play a vital role in representing the community and deserve a platform to educate others and denounce perceptions surrounding their existence. Creating safe space for Black LGBTQ individuals to share their legitimate lived experiences is a non-negotiable step towards progress. This is why I founded the Bronx LGBTQ center, Destination Tomorrow – Black and brown community members deserve to have a safe space right in their own neighborhood.

Black LGBTQ folks are in need of an organizing effort for our community to address the continued disparities. Many other minority groups have made progress towards eliminating issues facing their communities by directly addressing them through policy and political actions.

Throughout the pandemic we have seen heightened acts of racism and targeted attacks against the AAPI community, specifically against AAPI women. In response, the Stop Asian Hate movement was created to combat this violence – The New York City Commission on Human Rights, the Mayor's Office for the Prevention of Hate Crimes, the Mayor's Community Affairs Unit (CAU), and the Mayor's Office of Immigrant Affairs all began to coordinate closely to educate the public about their rights and protections in light of COVID-19-related stigma and hate crimes.

Moments like Stop Asian Hate help create a vision of what is possible for the safety of Black LGBTQ communities. With the proper organization and support, the creation of spaces to educate Black young LGBTQ folks around the issues that impact their lives is possible, but to this day these efforts are severely underfunded and disregarded.

We must hold other communities accountable and speak up at the table where we’re not represented. Calling attention to these issues and creating space for representation is the only way to change the dynamics of the conversation. White allies and LGBTQ individuals with more privilege must act to elevate the voices of those who are not being heard and fall victim to transphobia, homophobia, and racism.

***
Sean Ebony Coleman is the founder and executive director of LGBTQ+ organization Destination Tomorrow and a longtime activist for transgender/gender-nonconforming rights. On Twitter @Dest2morrow.