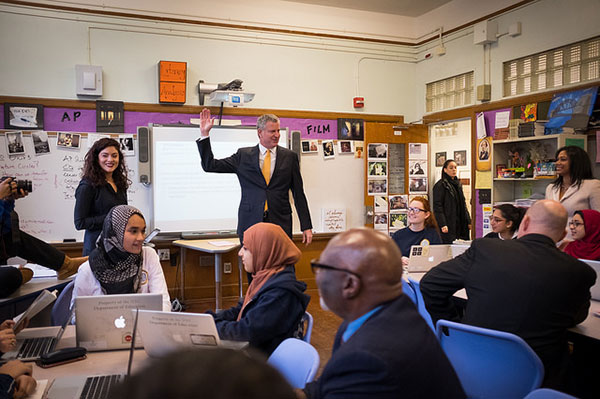 The annual Rite of Bashage on mayoral control of city schools is upon us. This month, Senate Minority Leader John Flanagan will beat up on Mayor Bill de Blasio for all manner of supposed educational sins before caving to an inevitable extension of mayoral control. Having been soundly whipped by the senatorial wet noodle, de Blasio will walk away a winner.

But there is a real education issue this re-election year that the mayor should be pushed on: the matter of a Chancellor search. The public has a right to know which side of the de Blasio record they’ll be voting on.

In 2012, then-candidate de Blasio criticized the serial secret appointments of Joel Klein, Cathie Black, and Dennis Walcott by Mayor Michael Bloomberg. As reported by City & State at the time, de Blasio said, “Cathie Black was pushed down our throat because of mayoral control gone to an undemocratic level. We need a more democratic—small-d democratic—version of mayoral control, and we need a chancellor who is presented to the public, not just forced down our throat.”

A year later, after being elected, he back-tracked, asserting no such democratic process of public involvement was necessary. Chancellor Carmen Fariña was unilaterally appointed without a public search or vetting.

This election is the first time de Blasio’s flip-flopping can be evaluated by voters. More importantly, the manner of a Chancellor search is not a legislative game of “gotcha” but an imminent matter of real world consequence.

The 74-year-old Fariña has kept her commitment to serve out most if not all of de Blasio’s term. But there is little doubt that she will soon leave. The state law up for June renewal gives the Mayor power of appointment. Thus it is entirely appropriate and practical for the Senate to now inquire how de Blasio intends to use this power and if, in keeping with his past statement, a small-d democratic process should be put in place.

There are good policy positions on either side. Maybe unilateral appointment is preferable, allowing the Mayor full authority and accountability for his pick. But a public process would allow for full vetting of candidates by parents, the general public, and the press, who will all have serious interest and questions about anyone in line for this highly important job.

A full-blown public search occurs in many districts but, if it is believed that some desirable applicants would decline an open process, the Mayor could nominate and the City Council could conduct an open confirmation hearing, as with federal cabinet appointees (and some mayoral appointments to boards and commissions, and the head of the Department of Investigation).

Instead of making a spectacle of this approval process, the manner in which this mayor and future mayors should appoint the Chancellor is a worthy topic, providing the Legislature with an opportunity to put politics aside for an important policy and electoral debate.

***
David C. Bloomfield is Professor of Education Leadership, Law, and Policy at Brooklyn College and The CUNY Graduate Center.  He is the author of American Public Education Law, 3d edition, and other published works. On Twitter @BloomfieldDavid.