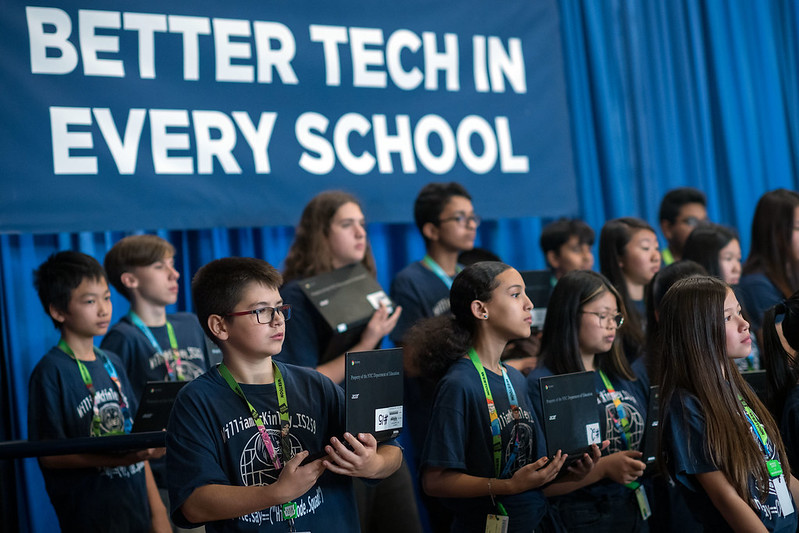 21st century education requires 21st century innovation. If we want students to think critically and creatively to learn to solve problems and succeed in today’s modern world they also need and must have access to modern technology.

A decade ago, laptops, tablets, desktop computers, and internet access were just beginning to be introduced into schools and classrooms. Today, these tools are commonplace across New York and the nation, integrated into lesson plans and required for homework completion. And although cellphones can sometimes be distracting to students in school, more curriculum and education resources are being developed for mobile devices than ever before.

However, the classrooms of tomorrow will feature technology that today seems like science fiction: Virtual reality that lets teachers instruct students remotely in real time; augmented reality that students can use to conduct complex experiments; robots that interact with students and help monitor their learning progress; super high-speed connectivity that allows for massive amounts of information to be downloaded in just a few seconds.

Students now in the K-12 system, members of so-called Generation Z, are tech natives; screens, social media and surfing the ‘net are as natural to them as breathing, and this has forced teachers and administrators to upend traditional instructional models.

But it’s the incoming crop of students, dubbed Generation Alpha, who will force the true revolution of education. Born beginning in 2010 – the same year Apple debuted the iPad – these kids will be fully tech-integrated, having never known anything other than the modern digital age.

If the education community fails to adapt to meet the needs and expectations of this new crop of students, we risk losing them altogether.

A 2013 Gallup poll of 500,000 students in grades five through 12 found that nearly eight in ten elementary students were “engaged” with school, but by high school, that number had dropped to four in ten. Once they got into their teenage years, students reported that school left them feeling “bored” and “stressed” instead of excited and engaged.

This phenomenon will only worsen if we don’t rise to the challenge of educating the next generation. To do so, New York must make investments now in high-speed connectivity, ensuring that every child across the state has access to the most up-to-date technology that will be necessary for success.

5G, the next evolution of wireless connectivity, is not only essential to this success but also to ensuring that New York leads the nation in creating a modern education system that truly matches needs of the modern world.

Governor Andrew Cuomo is right for recognizing that the development of the small cell technology is necessary for making 5G a reality across New York. The governor made clear in his executive budget proposal that streamlining the process for establishing a statewide small cell network is crucial for making sure all New Yorkers have access to high-speed broadband service.

Access to high-speed networks is also important in higher education, enabling students and faculty around the state, the nation, and even the world to communicate and collaborate, which is the bedrock of the academic experience as well as the foundation for our economic well-being.

Improvements in connectivity will only further enhance the ability of the higher ed community to work together and share information, facilitating research breakthroughs that help build our economy and keep us on the cutting edge.

These students cannot, for reasons of transportation, childcare, or other challenges, attend regularly scheduled classes in person. Enhancing distance learning opportunities will help them further their education and get better jobs, improving the quality of life for them and their families while also helping to boost the state’s economy.

New York has long recognized the benefit of technology in education. In 2014, state voters approved the Smart Schools Bond Act, authorizing the issuance of $2 billion worth of bonds to pay for upgrades and advancements – including in broadband or wireless connectivity for schools and their communities.

But if investment is not made to improve the statewide network, these local improvements will be for naught and that money will be wasted.

New York is clearly moving in the right direction when it comes to making sure school-age kids are getting the sound, basic education to which they are constitutionally entitled.

The state Education Department recently released the latest data on graduation rates and found they’ve risen by 7.3 percent for students who entered high school in 2015 compared to those who did so in 2006. In addition, the achievement gap between students of color and their white peers has diminished between 1.5 and 6.8 percent.

New York must keep this progress going by taking the lead in building the broadband infrastructure that gives all New Yorkers access to modern technology and connectivity they need to succeed and thrive.

***
Andrew Rasiej is the founder and CEO of Civic Hall. On Twitter @Rasiej.