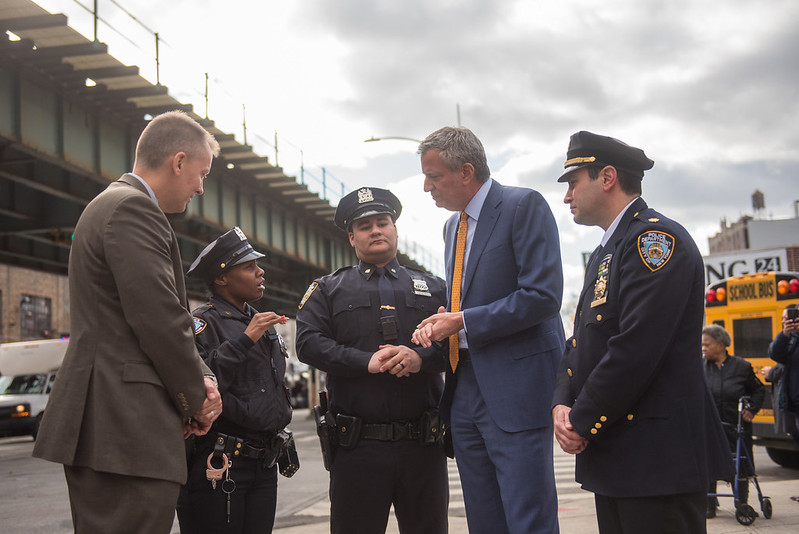 When I joined the NYPD in 2013, I was an unlikely candidate for law enforcement.  Nearly a decade earlier, during the 2004 Republican National Convention, I was a passerby arrested at a protest in Union Square. At the invitation of the New York Civil Liberties Union, I joined a class action lawsuit against the City related to those widespread arrests. Then, for several years after graduating from Harvard Law, I worked at a law firm and volunteered as a board member at the Bronx Defenders, a zealous criminal defense organization.

Many colleagues and friends were surprised when I joined the NYPD as a lawyer in the Intelligence Bureau, which had some vocal critics, including litigants who alleged the City had unfairly targeted Muslim communities in its counter-terrorism efforts.  However, I saw it as an amazing opportunity to support the NYPD’s public safety mission, while also scraping away at any unfair or overly-broad practices.

Indeed, I spent much of my time at the Department over the past several years meeting with lawyers and advocates to discuss their concerns, share information about department practices, and work towards policy solutions that balance public safety and civil liberties, especially in the context of protests and other political activity. In these negotiations, the parties around the table often disagreed, but the dialogue was, almost invariably, respectful and productive, and we all left better informed and more appreciative of one another’s perspectives.

When I moved to my most recent role as counsel in the Police Commissioner’s Office, which I left a week before George Floyd’s death, I continued working on issues that require balancing civil rights and public safety, such as facial recognition and the local DNA database. Significantly, I was not a lone soldier in this work, but rather found it widely supported throughout the organization, especially at its highest levels. NYPD leaders often asked important, thoughtful questions: Is this policy fair, and is it the right thing to do? And when devising policy in response to social problems like drug abuse or mental illness: How do we really help people?

Following the senseless death of Mr. Floyd in Minnesota, the positive standing the NYPD enjoyed among most New Yorkers was overtaken by a tsunami of anti-police sentiment driven by a handful of recent brutal incidents. That these incidents occurred hundreds of miles from New York City did not blunt the rage unleashed against police officers in New York. The unrest was amplified by the social dislocation, anxiety, and hardship wrought by the pandemic. People were open to rage, had plenty of time to do it, and the NYPD presented a highly visible, omnipresent target.

The rage and vitriol directed towards officers was astounding and without modern precedent in New York. Yet through this windstorm, the NYPD sought to protect the rights of peaceful protesters and worked hard to distinguish among the various currents of activity pulsing through the city: the thousands marching in support of the Black Lives Matter movement, the violent agitators bent on destabilizing city life through arson and vandalism, and the scores of opportunists brazenly looting and burglarizing city businesses.

Even so, scorn from the public and many media outlets mounted and whipped, creating an echo chamber in which seemingly all police officers—even those at the NYPD, a majority-minority department for over a decade—were viewed as suspected racists or oppressors. Worse still, many public officials in New York City pandered to the protesting crowds, even though they have access to facts that inform a more nuanced view.

Certain voices were greatly amplified and some rightly so. However, others were excluded from the conversation about policing, including many people who live and work in New York and put a premium on public safety. They do not want to “throw the baby out with the bath water” when it comes to the NYPD and the maintenance of public safety. Some privately emailed me, expressing dismay. No doubt people of this mindset express their views in muted tones, if at all, for fear of being targeted and labeled by the pernicious, intolerant political culture that marks our day.

But make no mistake: despite current false narratives that police are broadly racist, trigger-happy, or both, it is not morally inconsistent to respect police (and the rule of law) and to oppose brutality and prejudice in all its forms. Yet many people feel backed into choosing between two positions: pro-law enforcement or anti-racism.

This stark choice is forced on us by political opportunists and by individuals who are prone to selectively defending free speech while seeking to ostracize people with opposing views. They rarely mention crime victims or the NYPD’s role in suppressing violent crime. In our increasingly brittle political environment, it’s unsurprising that few, even among our elected leaders, seek to articulate a more nuanced, fact-based view.

That is not to minimize the reality that some officers exhibit prejudiced behavior or even engage in criminal violence. But these officers are the few, not the many, and clear-cut remedies exist: better training, and where necessary, discipline or criminal prosecution. What we know is that blaming a whole group of people, who share a race, religion, or in this case a vocation, for the bad acts of a few leads to unjust results and divisiveness. But this is what has happened.

Scathing, dehumanizing depictions of our City’s officers by certain activists, politicians, and media outlets bear no resemblance to the Department I came to know through years of service. Rather its members are predominantly committed, hardworking public servants. They come from many different racial, ethnic, and religious backgrounds. Most come from working-class backgrounds. Many are immigrants or the children of immigrants. While many among them are idealistic, their job is complicated by harsh realities with historical underpinnings, including significant racially-disparate patterns in crime victims and perpetrators.

The NYPD that I know responds to criticism, continually strives for improvement, and is fundamentally guided by a commitment to the public good that we can all respect. Forced to decide between the NYPD and standing against brutality and racism, I choose both.

***
Ashley Waters served as NYPD Counsel for Intelligence Affairs from 2013 to 2018 before becoming Counsel to the NYPD Police Commissioner from 2018-2020. She is now an adjunct professor of law at University of Virginia School of Law.