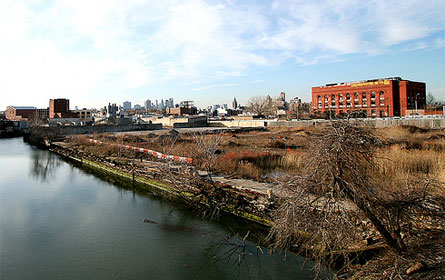 Photo (cc) Bryan Bruchman
Would Superfund status radically slow down the commercial development of the waterfront?


The one thing that everyone with an interest in the Gowanus Canal can agree on is that it needs to be cleaned up.

But the three important questions are: (1) what needs to be done, (2) why, and (3) when? It is the city and not the U.S. Environmental Protection Agency that has the correct answers to these critical questions: (1) address the sewage overflow issue, (2) because it is the contaminant most affecting quality of life, and (3) do it now.

The city's plan would address the current leading contaminant of the Gowanus Canal that most affects the quality of life of those who live and work in the area -- the raw sewage that runs into the canal when the combined (storm and sanitary) sewer system overflows. Upgrading and modernizing the flushing tunnel and pumping station, as well as selective dredging and capping of exposed sediments, can begin under the city's plan this fall; the city has allocated at least $175 million to accomplish this urgent goal.

(For an opposing viewpoint on cleanup of the Gowanus Canal, see Brooklyn's Lavender Lake Needs Superfund.)

This work, combined with the city's requirement that private developers build new storm water systems when they develop properties along the canal, will dramatically reduce the sewage overflows that are today the primary source of pollution of the canal. In addition -- just as a Superfund designation would do -- the city will compel the parties responsible for the decades-long pollution of the canal to contribute money to finance additional dredging of the sediments at no expense to taxpayers. The city, officials have said, will work collaboratively with the federal Environmental Protection Agency and the New York State Department of Environmental Conservation to complete this cleanup. Rejecting a counterproductive Superfund designation will not mean excluding the federal government from a central role in the cleanup.

The chief concerns of area residents are the odors and unsightly floatables in the canal caused by combined sewer overflows. Yet the Environmental Protection Agency has no intention (affirmed publicly by its Region 2 Director Walter Mugdan) to address the issue of sewage in the canal. The agency plans to dredge only the sediments at the bottom of the canal. While this is an important objective, the cost to remove all of these sediments is staggering and, notably, these sediments are not affecting area residents.

A Superfund designation could put on hold the city's efforts to address the important sewage issue. And given the Superfund's track record at other polluted waterways, even the sediments may not be removed for 25 years or more -- witness last week's news that, after a quarter-century, the dredging of the Superfund-designated Hudson River is just now set to begin!

More broadly -- based upon empirical evidence from other similar Superfund designations of waterways that have multiple parties responsible for their pollution -- what path would this cleanup be likely to follow if the Gowanus was designated a Superfund site?

The first step is for the federal government to conduct analyses of the condition of the canal. The Environmental Protection Agency has some seed money to accomplish this. During this period all plans for city remediation of the canal as well as private investment would be put on hold because no one would be willing to spend money until the agency's expectations for the cleanup are clear.

Further, during this time it will be unlikely that government authorities would be willing to issue permits for anyone to do work along the canal. So, there would be no private investment to create new infrastructure that would separate storm water from the combined sewer system. The city's plans for the pumping station, flushing tunnel and selective dredging and capping of exposed sediments to be performed by the Army Corps of Engineers also would likely be stalled. As such, there would be no improvement in the quality of life for nearby residents and workers because the sewage and exposed sediments would not be addressed. In fact, the $15 million budgeted by the Army Corps of Engineers would be rescinded if a Superfund designation were to occur, city officials have said.

Also at this time, the federal government will be looking for "potentially responsible parties" to determine who may be liable for past pollution. This is necessary because the agency does not have money to fund a cleanup of the canal. The federal government would sue these "parties" to raise this money. Decades, yes decades, of litigation would ensue, because those that are sued would just turn around and sue others to defray their costs.

The Environmental Protection Agency will not come up with $400 million by going after private parties. There are no Exxon/Mobils or General Electrics involved here -- no deep pockets. Take a look at most of the property owners and businesses currently on the canal and who have been there historically. It is impossible to imagine how the agency could suggest that it could raise $400 million them.

While the analyses grind on and the lawsuits and countersuits rage, the condition of the canal would deteriorate. Twenty years from now, the area would likely look like it does today -- or worse. One only has to look into other Superfund projects like the Hudson and Passaic rivers. Both of these were designated as Superfund sites in the 1980s; neither has seen any cleanup activity commence in more than 25 years.

So let's have the city, state, and private sector -- working with the Environmental Protection Agency -- get going on the cleanup without all of the wasted time and endless litigation that inevitably accompany a Superfund designation.

David Von Spreckelsen is a senior vice president of Toll Brothers and a member of the Clean Gowanus Now! Coalition - a group of two-dozen developers and property owners along the canal. â€ Toll Brothers received ULURP approval for a zoning change for a mixed-use project along the canal from the City Council earlier this year. The project will include 450 market rate and inclusionary housing units.