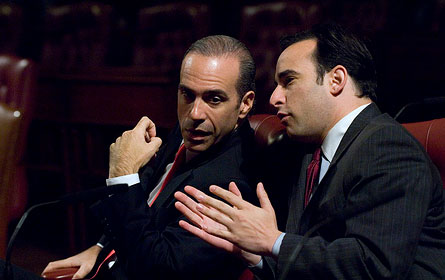 Go along to get along?

Don’t expect that either.

If you are a fan of democracy, you should welcome this turn of events, as it will result in greater and more substantive debate and a louder, stronger voice shared by hundreds of thousands of New Yorkers (dare I say even more than that?).

Historically, and still true today, the City Council has not had the level of partisan vitriol that has played out in Albany and our nation’s capital. Perhaps that's because it's a unicameral legislature. Or, more bluntly, maybe it's because in the modern council there have been so few Republicans there was a need for us to simply coexist to exist. Whether it was Tom Ognibene and Peter Vallone Sr., or Gifford Miller, current Speaker Christine Quinn and I, the leaders of the two major parties in the council more often than not have found a way to transcend ideological differences in order to strive for common ground, coalitions and consensus.

There is great value in bipartisanship but make no mistake, those of us on the other side of the aisle have never been shrinking violets. In Joseph Heller’s stirring 1979 political novel, "Good as Gold," Ralph, a presidential aide, tells a job applicant, “This president doesn’t want â€yes’ men. What we want are independent men of integrity who will agree with all our decisions after we make them.”

That will not be the 2010 incarnation of the Council’s GOP delegation. (Not that anyone who has been following the council, even in a cursory way, needs to be convinced of our approach.)

For years, we have talked about the need for genuine structural fiscal integrity, focusing tax dollars on essential services and not having a city government that attempts to be all things to all people from cradle to grave. We have voted against tax increases at every turn, rejected misguided legislation that hurt small business and tried to ensure our actions reflected a sensitivity to a precious, yet threatened resource in New York City -- the hard-working middle class, who find it tougher and tougher to pay their bills, provide for their families and have a decent quality of life.

Sometimes we did it with humor, and at times with anger, and there was even one occasion where we did not get past the first course at a dinner at Gracie Mansion because we thought a statement needed to be made. But perhaps now, as a five-man delegation that will speak in a respectful, informed voice, we can team with an emboldened cadre of like-minded Democratic allies, who also have grown weary of seeing their constituents pay too dear a price for a city government that seems to take them for granted and taxes them into the ground.

While I believe that our words and deeds in the past have impacted the direction of this council in a positive way, we genuinely hope that in the coming term the positions of this delegation will be viewed as more than just a token protest vote.

A quick example to illustrate my point.

In March 2004, I took to the floor of the Council Chambers amazed that all of my colleagues were seemingly nonplussed that we were about to enact a budget modification that in part was being implemented to allocate an additional $250 million dollars to the city’s Medicaid responsibilities. There was nary a peep! This from the same group of learned colleagues who literally spend weeks and months in hearings questioning agency heads, in budget negotiating team meetings debating the efficacy of just about every individual program the city institutes, and dare I say arguing in borough delegations as to what should be reflected as their priorities in the budget process. All this time and energy dedicated to a process, at the end of which, the council shifts only slightly more money than the aforementioned Medicaid budget modification that, but for my rant, would have gone without comment.

For too many of my colleagues, feeding the Medicaid monster a quarter of a billion dollars midyear was so acceptable as to not even warrant a query. Perhaps, this is why Medicaid and its three ugly “uncontrollable” sisters (pension and health care costs for city employees and debt service) have grown some 77 percent in the last eight years and are in large measure what is driving the daunting budget gaps we face for the next several years. It seems too often, the council forgets that it is a zero sum game and that every dollar spent on “A” is one less dollar available for police officers, firefighters, sanitation workers, etc. More frustrating at times, is the simple truth that many members have very different priorities and their definition of “essential” services differs greatly from many New Yorkers.

It is the hope of this delegation that a healthier debate on this question will now ensue and decisions that are currently foregone conclusions and the result of what appears to us as reflexive, typical knee jerk reactions, will now have to be enacted after a fuller discussion in which Democrats and Republicans challenge the all-too-accustomed orthodoxy of the council.

We genuinely respect all of our colleagues regardless of political affiliation. Many of us in the council want to get to the same destination, but differ passionately on the route we take to get there. We appreciate that unlike the minority parties in other legislatures, we have been treated fairly and have been welcomed as vital members of this institution. We look at the happenings in Albany and thank the Lord we serve in an institution where getting the people’s business done is what matters, not the letter on our voter registration cards.

Speaker Quinn has continued and enhanced the standard set by Peter Vallone Sr. and Speaker Miller and has encouraged us to speak as forthrightly as we want. We have complex and difficult challenges ahead. We look forward to working with all 46 of our colleagues in fulfilling our duties and responsibilities.