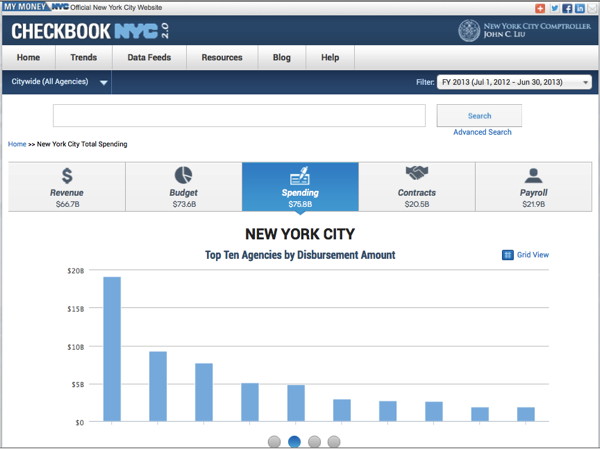 Some say the West Coast has the best beaches, the Midwest has the friendliest people, and that you can't beat the cheesesteaks in Philly.

But financial transparency? Fugghedaboudit. New York City’s got everyone beaten by a mile.

That’s not just our opinion. That’s the view of the United States Public Interest Research Group, which in January named New York City the most transparent municipal government in the nation on the strength of Checkbook NYC, a website created by my office that allows users to view City spending.

Recently, however, we took steps to share the honor: we made the source code for CheckbookNYC.com freely available to every government that wants it.

This “open source” release means that cities and states across the country can leverage our investment in Checkbook NYC to create similar websites of their own.

We hope other places will like New York-style transparency, and we think they will.

On CheckbookNYC.com, you can find comprehensive, up-to-date information about the money that flows into or out of the City’s accounts. Details about spending, contracts, payroll, budget, revenue — it’s all there.

And the site is accessible to techies and luddites alike. Search functionality, graphic visualizations, and an intuitive interface make it easy for anyone to become a fiscal watchdog.

We built it for a simple reason: shining a bright light on government spending helps root out waste and ensure that tax dollars are spent wisely.

When governments know that their spending decisions can be easily scrutinized, they are more likely to use their resources prudently.

The site has the potential to save taxpayers big bucks. Imagine: If Checkbook NYC encourages the City’s decision-makers to rethink just one-tenth of one percent of our annual $70 billion budget, that’s a $70 million savings.

And that’s just for starters. The site can further drive costs down by encouraging competition among vendors and serving as an early warning system for projects that start to go over budget.

We aren’t giving the code away just out of the goodness of our hearts — we’re nice, but not that nice. We also want to mobilize the collective talents of local governments and technology engineers to improve upon what we’ve created so far.

It’s a civic experiment that we can all benefit from. Say Los Angeles starts using Checkbook, and then develops a new way to map where tax dollars are spent; every government that uses the platform will be able to benefit from Los Angeles’ innovation.

Following this theory, the more rapidly and widely Checkbook is adopted by other states and cities, the better it will become.

To encourage widespread adoption, two of the leading providers of government accounting systems, Oracle and CGI, are building Checkbook “adapters.” Their clients — hundreds of governments across the country — will be able to feed their financial data into the Checkbook system with the flip of a switch. And the company we worked with to build the site, REI Systems, is lending their technical expertise to help get open-sourcing off the ground as well.

The code for Checkbook NYC is available on GitHub.com. Local governments and techies should take a look, and get involved.

No one’s ever going to stop debating about where to find the nicest places, friendliest people, or tastiest grub. But when it comes to financial transparency, we can work together and all become the best.