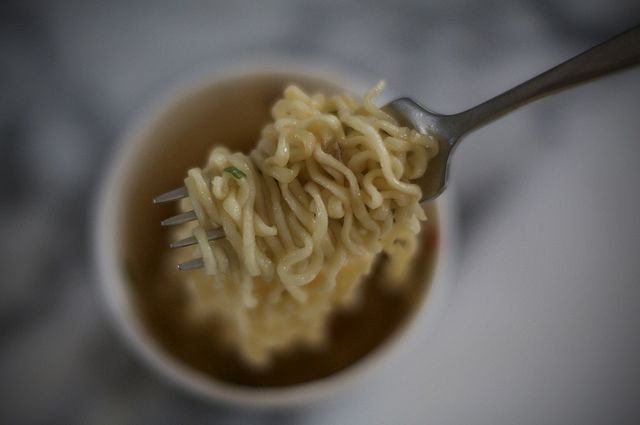 It's old news that food stamps, technically SNAP benefits, were cut on Nov. 1 by $5 billion, including cuts for about 1.9 million New York City residents. If you were single and on food stamps you might have gone from the maximum $200 benefit to $189 just in time for Thanksgiving. That's an $11 loss a month. For a family of four, it typically meant a $36 cut or about 24 meals a month.

By November 1, the day the cuts kicked in, I had just completed a "SNAP Challenge." Well, sort of.

A SNAP Challenge is one of those things where people who aren't in need of food stamps agree to live on approximately a food stamp budget for five days — just five days. The challenge I participated in was actually a little too easy because I was allotted $5 a day, for a five-day total of $25. That was an extra $2.50 over what a "real" SNAP beneficiary would have had to live on before the cuts took place.

So, I need to make a confession. First, I realize five days on a SNAP challenge is to living on food stamps as camping is to being homeless. Second, I failed. I failed the SNAP challenge.

I started out well enough. I stuck to the $5 a day budget for the first day. But I went over the $25 total on day four. It was only a five-day challenge and I couldn't make it.

While I'm being candid, I might as well go all the way. I cheated and still failed.

I ate a few morsels and drank copious volumes of coffee at work and didn't count it.

Cutting food stamp benefits, most of which go to kids, the elderly and disabled people, is no joking matter. The only real point of participating in the challenge was to realize how hard it was to possibly eat on that budget.

I stuck with mostly Raman noodles, and macaroni for variety. To put it another way, pasta, high carb and starchy foods was all I could afford. SNAP is theoretically designed to allow a nutritious diet, but I sure don't know how. Things like fresh fruits and vegetables just cost too much.

I didn't get the full SNAP experience even for five days. I wasn't restricted, as beneficiaries are, from purchasing hot or prepared foods. I wasn't subject to the stigma and judgment of others. I didn't have to go through the embarrassment of trying to purchase an item from a store that should have accepted it just to be turned down, knowing I didn't have money to make the purchase.

There's no geographic differential in the SNAP program. A person in the same income category, the same number of mouths to feed and other similar circumstances gets the same benefit in rural Louisiana, the Midwest bread basket or in costly New York City.

SNAP really is a safety net. It's a critical last-line-of-defense but increasingly porous safety net.

In America, studies say there'd be another 4.7 million people (again, mostly kids and seniors) below the federal poverty threshold without SNAP benefits. If that ratio is true for New Yorkers, SNAP saves over 160,000 of our city neighbors from falling below the poverty line.

These are real cuts taking food out of the mouths of hungry people. The Food Bank For New York City figures the cuts amount to the equivalent of 62 million meals annually in the Big Apple. Of course the meals probably couldn't actually include an apple. That's too expensive.

As we were approaching November, I was concerned because so many SNAP recipients didn't know the cuts were coming. The week before Nov. 1, though, letters went out to New Yorkers on SNAP. I guess it was sort of a directive to tighten belts and not be quite so hungry from here on out.

Suddenly, I became concerned that most beneficiaries would assume this was the big SNAP cut back we've been reading about for the past several months as the farm bill, larded with industry tax breaks, agri-business subsidies, farmer price supports.

If that was the big cut, I assumed many recipients might think, it's bad, but maybe not as bad as I was worried it would be. It's not easy, they might reason, but if I have to I can live with that.

Well, this isn't that cut. This one was just the expiration of a small increase in nutrition payments from the 2009 Recovery Act. The big one is still on the menu.

We don't know how big yet. The version passed by the Republican-controlled House has a $40 billion SNAP cut over 10 years — $4 billion annually. The cut comes mostly from throwing a good 3.8 million mouths off the program altogether.

But even the Senate Democratic version calls for a $4 billion cut over a decade.

We'll be celebrating Thanksgiving this month, most of us with opulent meals served on overflowing plates piled high with the traditional foods and dripping with gravy. But that's not for all of us.

The weekend before Nov. 1, I got a phone call about a homeless friend, dependent on SNAP, who ran out of "food stamps" before he ran out of October. Just like I ran out of my $25 before I hit the end of the five-day challenge. This guy, though, was sitting in a police station.

He was arrested for stealing a pack of hot dogs from a bodega. He was just so hungry, he said. And I got that.

Of course, that was before the SNAP benefit cut.