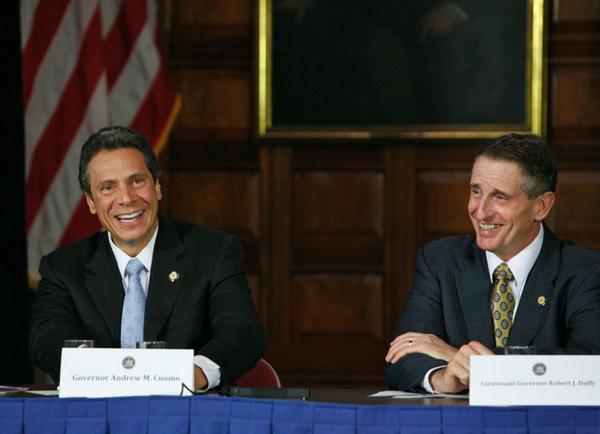 New York is suffering from mass political amnesia: no one seems to remember the condition of the state's polity when Andrew Cuomo assumed office. The Senate was barely functioning. Executive-legislative relations were in shambles. Key social policy issues went unaddressed. The Upstate economy languished. Budgets were regularly late and structurally out of balance. Summing up, Dal Forsythe, a former Budget Director and respected authority on state government, wrote: "[T]he state's governance system is widely regarded as among the worst in the nation, and its leaders seem unable to achieve effective cooperation for the accomplishment of common goals."

Economies were sought not only from state government operations – austere labor agreements, restructuring state operations - but by encouraging localities to collaborate, reduced assistance to general purpose local governments and school districts, and capping and freezing the property tax, local governments' lifeblood. On the revenue side, state taxes were largely held in check. A start was made to open up new sources of money: constitutional change to allow casino gambling. Changes were made in funding key state functions to ease demands on the general fund (e.g. the "rational tuition policy" for SUNY).

This focus on creating a sound state budget was a reasonable priority for Cuomo, perhaps the best priority. It offered extraordinary synergies. Financial integrity is intrinsically important for a state's health. Achieving it through sequential years of timely budgets demonstrated competence to govern, and was a major step toward restoring confidence in government. A sound budget, with taxes constrained, requires attention to efficiency and underlies economic growth.

The respected Citizens Budget Commission wrote this May that New York's fiscal discipline "has markedly improved the State's fiscal condition." In June, Moody's Investors Services raised the state's bond rating to its highest level in half a century. In July, State Comptroller Tom DiNapoli, a co-partisan but no great political friend of the governor, reported: "New York has made significant budgetary improvements since the Great Recession to put it on solid financial footing, and the result is that the state's fiscal condition is the best it has been in years."

Most politics involves giving to get. We have a legislature. It shares power. Its members are elected; they are not gubernatorial appointees. So to get what he wanted most, to build the necessary coalitions, Cuomo often found it necessary to give ground on his other agenda areas.

One casualty was political reform. Legislators are winners under current electoral rules. They don't like changes that restrict their discretion - like ethics reform - or diminish their hold on office - like genuinely neutral redistricting or campaign finance reform. In the face of their resistance, even to ideas most Assembly and Senate members pledged to support during the 2010 election, like independent redistricting, reform became a lesser priority for the governor. It was not abandoned, but its evisceration was accepted.

A second was the social agenda, or large elements of it. Majority Senate Republicans were aligned with Cuomo's fiscal goals; an easy sell. But many of them relied on Conservative Party backing. They resisted same-sex marriage, and the reproductive rights element of the women's equality agenda. Cuomo had to modify, delay, or put aside these high profile social policy goals to advance his first priority. After a delay, same-sex marriage was achieved. Two Republican Senators who supported same-sex marriage were defeated in the next election. Reproductive rights is still an agenda item.

The steps Cuomo took to advance his fiscal goals angered some in his party: Senate Democrats who were shut out of power, and local elected Democrats who felt the squeeze of property tax limits. They also provoked opposition from interest groups that usually supported Democrats: public employee unions, education activists - in general, those who advanced various elements of the so-called "progressive agenda."

Most politics involves giving to get, but not all. Some things cannot be negotiable for a governor, things like opposition to corruption. Dissolving early his own Moreland Commission on Public Corruption deprived the governor of directive moral authority; it reduced him to the status of 'ordinary politician.' Cuomo, regarded as extraordinarily politically astute, erred in treating the Moreland Commission as one more occasion for ordinary transactional politics. Moreover, he failed to realize that a very powerful actor from outside state government – federal prosecutor Preet Bharara – would be drawn into the arena by his actions in connection with this commission, in the midst of the election season. The unfolding is still unknown.

A second political miscalculation was an underestimation by the governor of the political costs of the priority he chose, and those he compromised. Disappointed or angered Democrats, he calculated, would nevertheless be unwilling to support a Republican. They would have no real alternative at the polls, except to not vote at all. The importance to the governor of the Working Families Party nomination was in accord with the strategic goal of denying disaffected Democrats an alternative to him on left in the general election. But Zephyr Teachout, energized by her spirited but failed bid for the Working Familes nomination, unexpectedly decided to fight on, qualified for the Democrat primary ballot, and survived Cuomo's legal challenge to her residency. Teachout emerged as a David against Cuomo's Goliath, offering the very alternative in a Democrat primary that the governor sought to avoid.

Critics suggest that Andrew Cuomo had the wrong priorities, and made the wrong tradeoffs. In fact they suggest that tradeoffs were not necessary, and say that he could have achieved all that they really wanted, and he said he wanted, if he truly desired to do so. Their vision of a single person fully empowered to rule New York would be frightening if it were true; fortunately it is not in our power sharing system.

Andrew Cuomo in his first term has been a serious, focused governor who advanced the right priority for New York, but also has made some very bad choices and judgments. Under Cuomo's leadership New York has been better governed than at any time in the state's recent past, and is poised for further renewal. But now we need a new first priority: we must adopt the institutional and process reforms that will allow us to restore our democracy, to be fairly and cleanly governed.

For political system change, as the experience of the past four years again painfully shows, we cannot rely on any governor and any legislature. We must bypass those in power. Our institutional means for doing this is to call a Constitutional Convention.

We are required to be asked at referendum in 2017, during the term of the governor we elect this year, whether we want such a convention. Calling one to achieve comprehensive reform in our politics and government reform was part of Andrew Cuomo's New New York Agenda in 2010. It must be a leading priority for the next elected governor.

Meanwhile, two cheers for Andrew Cuomo. Not one. Not three. Two cheers.