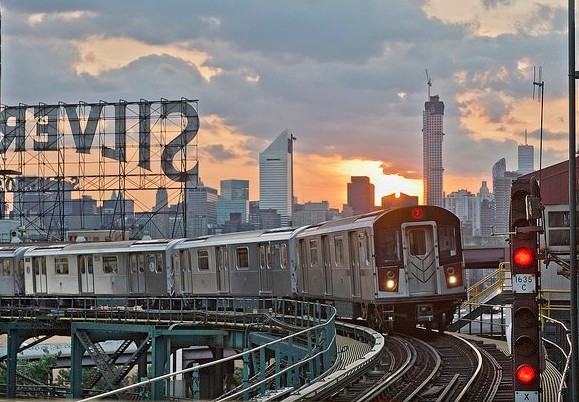 Last month, the MTA submitted its five year capital budget. The $32 billion plan would provide critical funding for the replacement of subway cars and buses, the modernization of signal and communication systems, and major expansion projects like East Side Access and the Second Avenue Subway. While the capital plan is essential to the continued functioning of New York's century-old transit system, there was a hitch: $15.2 billion remains unfunded. How can the MTA close this gaping hole in its budget? With strong leadership and creativity from Mayor Bill de Blasio; wrangling funding from Albany and Washington while increasing the city's financial support.

Over the last twenty-five years, the City's direct contribution to the MTA capital program has fallen markedly. In 1989, Mayor Ed Koch allocated $950 million to the Authority – representing a 15 percent share of the city's total capital budget. By 2007, that contribution fell to $124 million, a 1.4 percent share. And while the City's funding of the 7 Train extension - via the Hudson Yards Investment Corporation - provided a bump over the last five years, its $449 million contribution in 2013 was less than half its 1989 total. 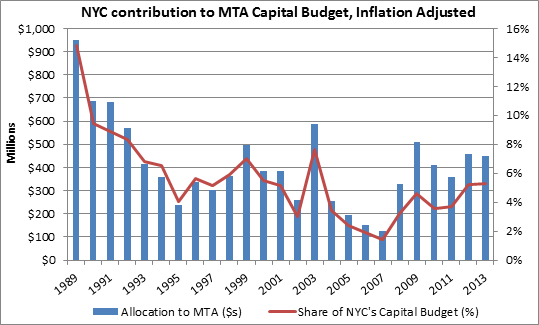 With the 7 Train extension nearing completion, the city mustn't allow its funding to return to mid-2000s levels. In its capital plan, the MTA budgeted only $131 million per year from the city over next half decade. Mayor de Blasio should consider tripling or quadrupling that sum.

In the past, the City's allocation to the MTA has been highly targeted. During his final term, Mayor Koch made a generous contribution to replace the Transit Authority's aging and graffiti-stricken subway cars. Mayor de Blasio and the City Council should take a similar tact, devoting dollars to a specific priority.

Across the transit system, there are a number of urgent needs. According to the Center for an Urban Future's Caution Ahead report, for instance, 37 percent of the subway's signal system has exceeded its fifty-year useful life and approximately 1,000 subway cars running along the A, C and E lines were built prior to 1975.

The MTA's fare-collection system too, is nearly obsolete. Officials have warned that its MetroCard turnstiles cannot be maintained beyond 2019. As the Transit Authority begins to implement a contactless, smart-card payment system, the City's new Municipal ID card could serve as a platform. In Boston, Massachusetts Bay Transportation Authority (MBTA) passes are built into the One Card for students. New York could fund a similarly integrated ID, helping the MTA adopt a modern fare-collection system while ensuring broad adoption of the new Municipal ID card.

The City can also help the MTA develop new funding streams. The second phase of the Second Avenue Subway, running from 96th Street to 125th, will be a boon to East Harlem developers. The City could follow London's lead, establishing a Community Infrastructure Levy on each square foot of new construction in the neighborhood. As developers profit from increased investment in public infrastructure, it is only fair that they contribute to this investment. The return on the levy could be divided between the subway extension and the city's affordable housing fund.

Importantly, the City cannot allow Albany off the hook. The current five year plan assumes zero capital contributions from the State. While Albany does contribute to the MTA operating budget, this is drawn from dedicated revenue sources that largely originate in New York City – like the corporate franchise tax surcharge and real estate transfer taxes. Discretionary funding for the MTA, on the other hand, was cut by $30 million this year.

Given that the city – and by extension, the subway – is New York's primary economic engine, this is unacceptable. Mayor de Blasio should work with Governor Cuomo, ensuring that any increase in the city's allocation be matched or multiplied by Albany – sourced, perhaps, from the state's new infrastructure bank.

The City should also press the MTA to more equitably distribute its capital funding across the subway and regional rail systems it operates. The 2015-2019 capital plan devotes 25 percent of rail funding to the LIRR and MetroNorth, despite the subway representing 91 percent of the Authority's ridership. If funding were divided according to ridership, the subway system would receive an additional $3.6 billion. Though perfect parity is not necessarily advisable, Mayor de Blasio should negotiate for a fairer distribution.

The subway is New York City's central circulatory system. Its 660 miles of track connect residents from Van Cortlandt Park to Coney Island, Flushing to Times Square. It is the thread that stitches the five boroughs together and a bellwether of New York's fortunes: as goes the MTA, so goes the city. To ensure New York's continued economic viability and quality of life, the upcoming capital plan must be fully funded. To do so, the Mayor and the Council – as well as the Governor – must take action.