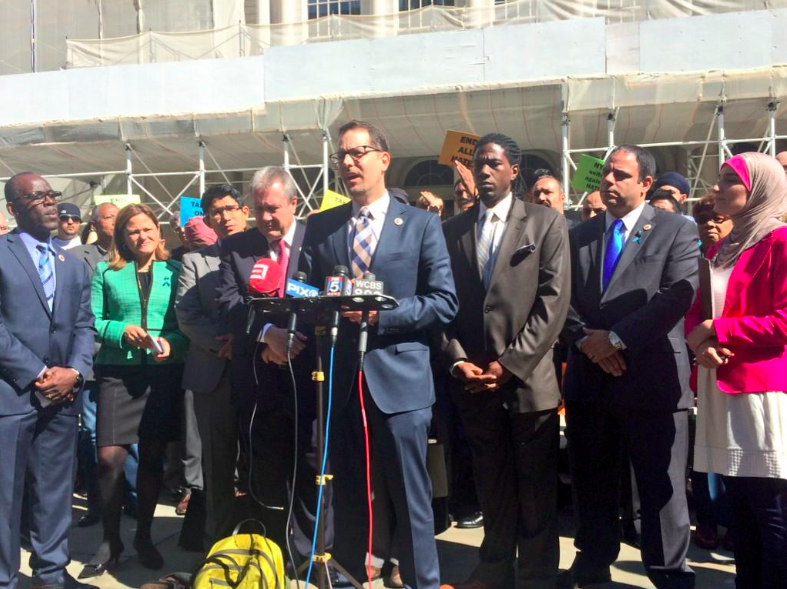 Mayors and police unions have clashed for generations in New York City, conflicts which have often erupted in the form of work slowdowns by the cops in the trenches. But the scale and intensity of the current job action by rank-and-file officers is unprecedented. We're seeing dramatic drops not just in low-level ticketing but in nearly every category of arrest--including armed robbery and drunk driving.

It will require unprecedented action to pull our city back from this perilous precipice.

The level of vitriol in the public dialogue reached red hot levels in New York City following a grand jury's decision not to indict in the Eric Garner case and the heinous assassination of Detectives Wenjian Liu and Rafael Ramos. We can't heal the profound divisions in our city until we begin to heed the call, made by Commissioner Bill Bratton in his eulogy to Detective Ramos, to "learn to see each other."

That means reform activists must cease referring to police in dehumanizing terms. This includes demonizing all cops as racists or making the absurd accusation that the NYPD is equivalent to the KKK. It shouldn't take the murder of two police officers to remind New Yorkers of the difficult, stressful, and dangerous conditions that cops labor under day in and day out.

By the same token, critics of the reformers must stop saying that anyone calling for change in the NYPD is anti-police. Or that fighting against unequal treatment of people of color is slandering all cops. New Yorkers certainly have a right to expect that those charged with protecting us must not kill unarmed civilians, and to have a right to speak out when such tragedies occur.

The fact is that the vast majority of people on both sides of this divide want exactly the same thing. We want cops to be safe. We want crime to continue to go down. And we want everyone treated fairly regardless of their skin color. And yes--we want the police to be active and engaged, and we understand that proactive, community-centric policing requires more cops not fewer (which is why my colleagues and I in the City Council proposed the addition of 1,000 new officers last year).

All of which make the current enforcement slowdown perplexing and alarming. Policing, much like teaching, is a job requiring judgment. Even a 200,000 page manual would not be sufficient to stipulate how each aspect of the the work should be carried out. Policing works in New York City because nearly all cops care deeply about their mission of keeping the public safe and don't hesitate to go above and beyond their contractual obligation. Officers Andrew Dossi and Aliro Pellerano exemplify this spirit--having been shot last week in the Bronx responding to a robbery, even though they had just come off duty.

The current work slowdown runs counter to that heroic ethic. And it endangers millions of New Yorkers, robs the city of desperately needed funds, and undermines civilian control of the force.

It also diverts us from critical policy work aimed at making the NYPD the best it can be--reforms that will benefit not only the general public but cops as well. When we deploy body cameras it will enhance accountability on both sides of the shield. As we roll back the over-criminalization of marijuana possession it will free up critical police resources so they can be deployed to fight more serious crime. As we train cops on how to de-escalate potentially violent confrontations it will make everyone safer.

It is imperative that all of us--cops, activists, regular New Yorkers--start to truly see each other, and to understand that only by building on our common goals and aspirations can we live together as one city.

***
Mark Levine is the New York City Council Member for the 7th District, representing parts of the West Side of Upper Manhattan.